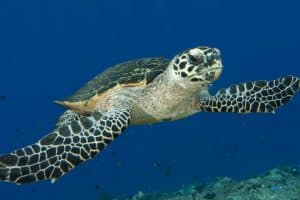 Adult hawksbill typically grows to 1 m long and weighs around 80 kg on average. The hawksbill sea turtles mainly feed on sponges found on coral reefs. They also feed on crustaceans, algae, and fish. Their predators are large fish, sharks, and humans. 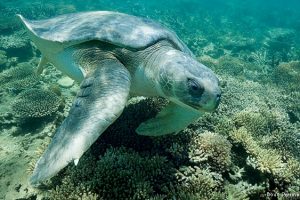 Then, the flatback sea turtles stick to the continental shelf of Australia and occur especially in grassy areas, bays, lagoons, estuaries, and any place with a soft-bottomed sea bed. These turtles feed on soft corals, sea cucumbers, shrimp, jellyfish, mollusks, and other invertebrates. 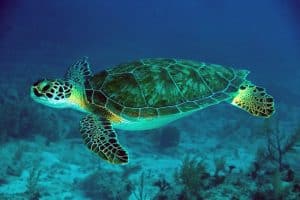 The green sea turtle (Chelonia mydas), also known as the green turtle, black sea turtle, or Pacific green turtle occurs throughout tropical and subtropical seas around the world, with two distinct populations in the Atlantic and Pacific Oceans. The green sea turtle has a large and teardrop-shaped carapace. The mature individuals have average weights of 68–190 kg and the average carapace length is 78–112 cm.

On the other hand, The green turtles changes their diet with age. Juveniles are carnivorous, they fish eggs, mollusks, jellyfish, small invertebrates, worms, sponges, algae, and crustaceans. As they mature they become omnivorous and mostly herbivorous. 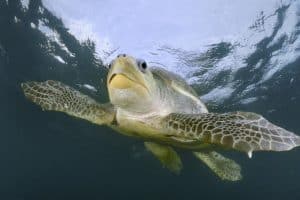 The olive ridley sea turtle (Lepidochelys olivacea) is a medium-sized species of sea turtle that lives in warm and tropical waters of the Pacific and Indian Oceans. Olive ridley has an olive colored, heart-shaped and rounded carapace. In immature stages of the life cycle, the olive ridley is predominantly carnivorous. 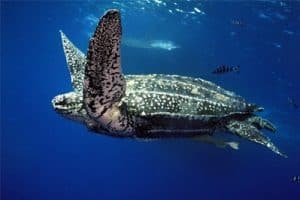 The leatherback sea turtle (Dermochelys coriacea) is the largest of all living turtles. It reaches 1.83–2.2 m  in total length and 250 to 700 kg in weight. This turtle has a large, teardrop-shaped body which is the most hydrodynamic body design of any sea turtle. Adult turtles feed almost entirely on jellyfish, but also tunicates and cephalopods.

Furthermore, these turtles become prey to predatory fish and cephalopods once they enter the water. One threat that makes them one of the endangered species in the Great Barrier Reef is plastic bags floating in the ocean. They mistake these plastic bags for jellyfish. 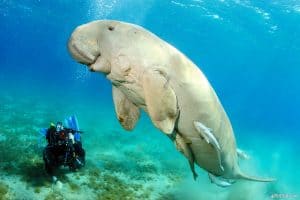 The dugong (Dugong dugon) is a medium-sized marine mammal. An adult doesn’t exceeds 3 m in length and can weigh more than 250 kg. The dugong has a large body with a cylindrical shape that tapers at both ends. They change their colour due to the growth of algae on the skin. The Great Barrier Reef provides primary feeding areas for dugong.

For thousands of years, people hunted dugong for its meat and oil. Traditional hunting still has great cultural importance in several countries in this modern age, particularly northern Australia and the Pacific Islands. 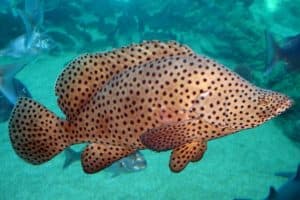 The barramundi cod is common name for Humpback grouper (Cromileptes altivelis) in Australia. This species a medium-sized fish which grows up to 70 cm and swim in a range of depth from 2 to 40 m. They live in clear waters from lagoons and seaward reefs with a preference for silty areas.

In addition, their main diet is small fishes and crustaceans. This species is naturally rare and sensitive to over harvesting due to its high value in the live food fish trade. The habitat degradation is also a threat for the fish. 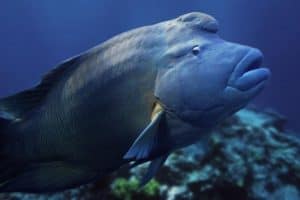 The maori wrasse (Cheilinus undulatus) or humphead wrasse is a species of wrasse lives on coral reefs in the Indo-Pacific region. Maori wrasse is a long-lived species, but has a very slow breeding rate. This species becomes endangered due to the ocean acidification that is reducing the calcification rate of coral species.

When the atmospheric CO2 increases, the pH of Earth’s oceans are causing the acidification and therefore disturb the reef building activity. The other threats to put this species in endangered species in the Great Barrier Reef are including intensive and species-specific removal in the live reef food fish trade and destructive fishing techniques, such as bombs and cyanide. 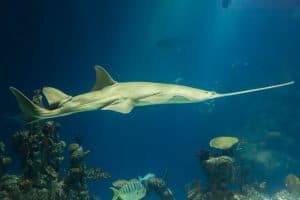 The longcomb sawfish or green sawfish (Pristis zijsron) is a sawfish found in tropical waters of the Indo-West Pacific oceans, from the Red Sea and east Africa to Papua New Guinea, north to southern China, and south to New South Wales, Australia. This species can reach a length of up to 7.3 m with a  blade-like snout known as a rostrum 1.5 m long.

Meanwhile, the species belongs to the critically endangered list due to number’s decline by 80% over three generations, with the main threat being fishing. It is not commonly the target species but easily gets entangled as bycatch for its meat, fins and rostrum. 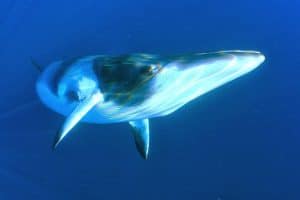 The fin whale (Balaenoptera Physalus) is a marine mammal belonging to the suborder of baleen whales that is the second-largest mammalian on the Earth after the blue whale. The average size of adult males and females is about 18.5 and 20 m, respectively, with the weights of about 38.5 and 50.5 tonnes. The fin whale’s color is brownish to dark or light gray dorsally and white ventrally.

Furthermore, the fin whale is one of the fastest cetaceans. They can sustain speeds between 37 km/h and 41 km/h (25 mph) and bursts up to 46 km/h. Large, fast-moving ships over or near continental shelves and ship collisions are the cause of the fin whale’s injuries and mortality. 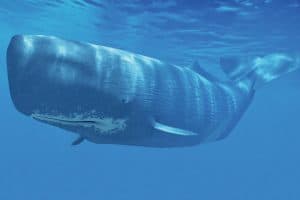 The sperm whale (Physeter macrocephalus) is the largest toothed whales and toothed predator. The average length of the males is 16 m. Sperm whales usually dive between 300 to 800 m to search food. Mature males live solitary outside of the mating season while females and young males form groups. Females give birth every four to twenty years. They nurse the calves for more than a decade.

Sperm whales lifespan exceeds 60 years of age. The sperm whale is a prime target of the whaling industry for its oil called spermaceti oil. This oil is dominant for use in oil lamps, lubricants, and candles. 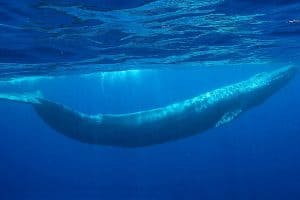 The blue whale (Balaenoptera musculus) is a baleen whale that reaches up to 29.9 m in length with a maximum recorded weight of 173 tonnes. It is the largest animal known to have ever existed in the world until today. The blue whale has a long and slender body that can be various shades of bluish-grey dorsally and somewhat lighter underneath.

In other case, This endangered species of whale is at high risk of orca or ocean vessel collision. The change in ocean temperature can also impact on the blue whale’s food supply. 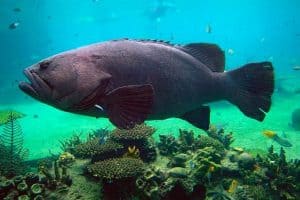 The Queensland grouper in Australia, is the largest bony fish found in coral reefs. This species occurs near the surface to depths of 100 m at reefs throughout the Indo-Pacific region. It reaches up to 2.7 m in length and weighs of about 400 kg. The Queensland grouper has a large mouth and a rounded tail. This species feeds on a variety of marine creatures, including small sharks and juvenile sea turtles.

Then, like most groupers, Queensland groups are protogynous hermaphrodites. They all are born female, but some become male when few males are present. 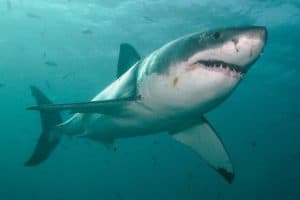 The great white shark (Carcharodon carcharias) is a species of large mackerel shark.  The great white shark is possibly the world’s largest known extant macropredatory fish, and is also one of the primary predators of marine mammals as well as the other animals like fish and seabirds. Male great whites on average measure 3.4 to 4.0 m in length, while females is 4.6 to 4.9 m long.

On the other hand, maximum life span is arguably more than 30 years. The sharks can swim at speeds of over 56 km/h with the depths of 1,200 m. 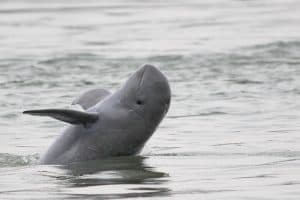 The Irrawaddy dolphin (Orcaella brevirostris) is a euryhaline species of oceanic dolphin that looks similar to the beluga in appearance, though most closely related to the killer whale. The Irrawaddy dolphin can weigh of about 90 kgto 200 kg (440 lb) and is 2.3 m long in average. The color of Irrawaddy dolphins is grey to dark slate blue, paler underneath, and no distinctive pattern. Their diet includes fish, crustaceans, and cephalopods.

Unlike the other dolphins, Irrawaddy dolphins are shy of boats, not known to bow-ride, and generally dive when alarmed. 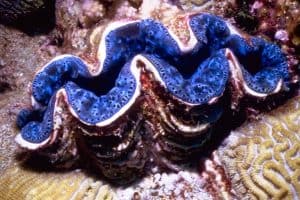 The giant clam (Tridacna gigas) is one of the large clam species native to the shallow coral reefs of the South Pacific and Indian oceans. They can weigh more than 200 kilograms and measure as much as 120 cm across. The average lifespan in the wild of this species is over 100 years.

The giant clam is hermaphrodites, they produce both eggs and sperm. However, self-fertilization is not possible. The giant clams become one of the endangered species in the Great Barrier Reef due to intensive exploitation by bivalve fishing vessels. 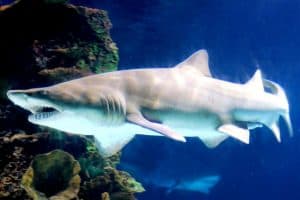 The sand tiger shark (Carcharias taurus) is a species of shark that occurs in subtropical and temperate waters worldwide. This species lives around the continental shelf, from sandy shorelines and submerged reefs to a depth of around 191 m. Adult sand tigers can grow from 2 m to 3.2 m long and 91 kg to 159 kg in weight. It has  pointy head, and is opposed to round, while the snout is flattened with a conical shape.

Humans and the sharks compete for food as the result of fisheries industry exploitation by human.

Those are 17 Endangered Species in the Great Barrier Reef you should know about. The beauty of the coral reefs and the abundant living creature around them need our protection so there won’t be any number’s decline.