Currently, there are 5 endangered tuna species living in different parts of the oceans in the world. Some of them are critically depleting in population while some are even close to extinction. Tuna fish are important to people mainly because their meat are sold and used for food. Not only are they delicious but also nutritious. Besides, as one of the top predators, they play a major role in maintaining the ocean ecology. Here are the 5 endangered tuna species that you should know along with their status in the IUCN Red List of Threatened Species. 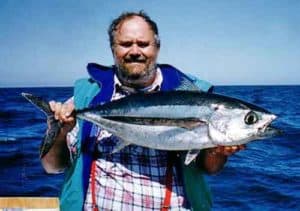 The Albacore tuna is often nicknamed as the chicken of the sea due to the colour of their flesh. They live in the Mediterranean Sea as well as the Pacific, Indian and Atlantic oceans. The Albacore Tuna are dark blue in colour with a hint of silver.

Meanwhile, as for their bellies, they are white. These fish are relatively small but they have big eyes and big mouth too. Additionally, they also have fins located at the top of their bodies that are also dark blue with a yellowish tone.

An adult Albacore tuna can reach up to 1.4 metres and weigh around 36 kg. They have a life span of 12 years. When they travel around in water, they form a school consisting of the same species only. Moreover, they feed on various oceanic creatures depending on what season it is. They often eat other fish, crabs or squids. Also, they dive deep underwater to hunt for their food.

Unfortunately, overfishing has made the Albacore tuna to be listed as one of the near threatened species of tuna. The Albacore tuna is one of the most popular tuna that are available to consume. Their meat are usually packaged in cans. For the labels, they are often known as the white meat tuna. This label makes it easier to distinguish the Albacore tuna from the other species of tuna. In result to high demands and overfishing, their population numbers continue to decline. Other than that, there are also reports stating that they have become rarer by the days. 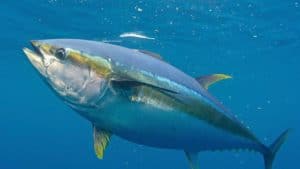 They Yellowfin Tuna are one of the top predators in the sea. They are quite large and could measure up to 2.4 metres in length. As for their weight, they could weigh around 200 kg. They can be identified from their metallic blue bodies with yellow colouring on their sides. Their bellies are silver. They do not have a long lifespan like the Albacore tuna since they can only live up to seven years.

These tuna fish commonly prefer tropical waters. In addition, these tuna fish are also known to be migratory, swimming to different locations depending on the seasons. They swim in school consisting of different species of tunas or even dolphins. Furthermore, these tuna are one of the top predators of the ocean feeding on other fish or squids. They are very strong and fast swimmers.

They are currently listed as near threatened since the demands for their meat is still very high. The meat of the Yellowfin tuna are highly desired for food especially in the sashimi and sushi culinary. Other than that, they are usually sold canned, frozen or fresh in the market. Thus, it creates some overfishing in certain population. 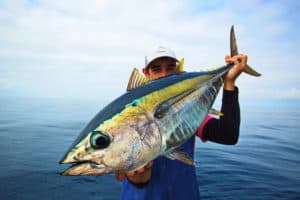 Another species that is at risk of being endangered is the Bigeye tuna. They are very large tuna fish that live in the tropical waters namely the Indian, Pacific and Atlantic oceans. Similar to the Yellowfin tuna, the Bigeye also migrate during different seasons. Also, they swim in school with the other species.

In length, they could measure up to 2.5 metres. For their weight, the Bigeye tuna could reach 180 kg. Indeed, in addition to their large heads, they also have large eyes. They are dominantly metallic in colour for their upper side of the body, specifically dark blue. As for the lower side, including the belly, they are mostly white.

They have a very long lifespan ranging from 10 up to 12 years. Reportedly, the longest living Bigeye tuna lived for around 16 years. The Bigeye tuna eat sardines, tiny mackerels, squids or other water creatures that they could find.

Sadly, these Bigeye tuna actually have the status of vulnerable to extinction. Their population are increasingly depleting due to different factors. One of the factors is global warming. The temperature of the oceans is getting warmer. It halts the production of phytoplankton that are crucial to the food chain in the ocean.

Other than that, the temperature seriously stresses out the tuna and causing early deaths. The second factor is overfishing. Just like the Yellowfin tuna, the Bigeye tuna is very sought after in the food industry. This include them being sold frozen, fresh or in sashimi. Currently, consumers are discouraged from consuming the fish because of their critical situation. 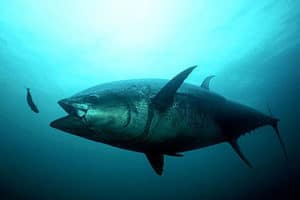 The Southern Bluefin tuna belongs to the family of the largest tuna in the world. They mainly live in the Southern parts of the world. These big tuna fish could grow up to 2.5 metres in length. Their weight could reach around 260 kg. The colour of their bodies is mainly white and silver with a hint of light yellow. Their tails are also shaped like the crescent moon.

The Southern Bluefin tuna are very fast swimmers and continuously swim across different oceans in search for food or colder water. They mostly feed on squids, octopus, crustaceans and other oceanic species that they could find.

In addition, Southern Bluefin tuna have an extremely long life expectancy that is around 12 years. The longest lifespan of a Souther Bluefin tuna that is ever recorded is 40 years. 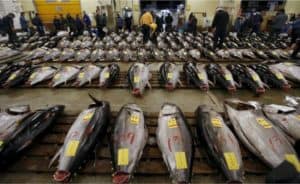 Unfortunately, their popularity might be one of the reason for their worryingly declining population number. The Southern Bluefin tuna are currently in the critically endangered status. Additionally, the Southern Bluefin tuna is the most popular and the most desired for their meat. The top three countries that have a huge demand for this fish are Japan, USA and China.

Moreover, the high demand specifically comes from the sushi and the sashimi culinary. It is said that their meat has the perfect flavour for raw consumption.

Therefore, high-end restaurants usually their meat for their food. It is reported that one Southern Bluefin tuna could sold for $1.75 million.

Their species keep reducing in number due to overfishing and also illegal fishing. Highly hunted since the 1950s, their species are reduced by 15%. It is predicted that in the next 100 years, there could be less than 500 species of Southern Bluefin tuna in existence. 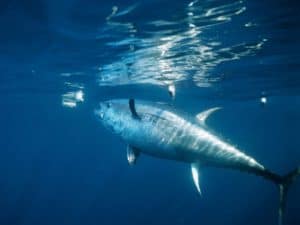 Atlantic Bluefish tuna is another large tuna that currently resides in the waters of the world namely of the Newfoundland, Iceland, Western and Easter parts of the Atlantic ocean. They also live in the Mediterranean sea as well.

They once could be found in the Black sea but their population have completely diminished. Furthermore, these massive fish could reach the size of 3 metres and weigh around 450 kg. The heaviest Atlantic Bluefin tuna ever recorded is apparently 900 kg.

For those who are wondering what these giant tuna fish feed on, they hunt for smaller fish, eels, squids, crustaceans and any other creatures found in the deep oceans. The way their bodies are structured enable them to swim fast and also make them powerful predators. In addition, they have beautifully coloured bodies that are dominantly metallic blue for the upper part. Their lower part is sparkling silver and white. Their colouring is interesting as it helps them to camouflage themselves in different parts of the oceans. Moreover, the Atlantic Bluefish Tuna take longer time to fully mature. But they have a relatively long lifespan of 20 years. 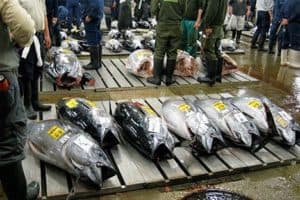 Sadly, the Atlantic Bluefin tuna is also under threat of going extinct. Right now, they are currently listed under endangered. However, their status could become worse as their population number keeps decreasing. There are different factors that are contributing to their unfortunate condition.

One factor is definitely overfishing. Since their meat is said to be very delicious, the sushi and the sashimi culinary are also highly demand for their availability.

Demands begun to increase during the 1970s as Japan wanted more of them. Decades after decades of hunting this fish hurt their numbers as they are also very slow to reach maturity. People are also eager to hunt this tuna because they are sold at very high price range. One of the highest price for this fish is $736.000.

Other factors include pollution as well as oil spillage that occur in the ocean. Those things highly affect the quality of their habitat and in return also negatively impact their lives. Premature and unwanted deaths might occur due to a disturbance in the food chain and ecology as a whole.

To protect these tuna from extinction, more conservation and restrictions are needed. Conservation will help them from being overfished and help them to maintain a healthy population. Also, restrictions or laws could prevent overfishing. Thus, these important tuna fish could grow and flourish in good numbers.