3 Main Differences Between the Ocean and The Sea

A lot of people frequently use the terms ‘sea’ and ‘ocean’ interchangeably because they don’t really know that both terms are different especially when speaking of geography. Most people use both terms to mean the same thing which is a continuous mass of seawater on the earth’s surface. However, strictly speaking, there are some differences between the two. For example, for the simplest one is that seas are smaller than oceans and are usually located where the land and ocean meet.

Seas are generally referred as a large body of salt water, though the term is used in other contexts as well. Most commonly, it means a large expanse of saline water connected with an ocean and is commonly used as a synonym for ocean. Overall, seas are smaller and partially enclosed by land, there are about over 50 smaller seas scattered around the world. In contrast, oceans are actually one large interconnected water body. Oceans comprise one global, interconnected body of salt water which frequently referred to as the World Ocean or global ocean.

The size or area is probably the most known difference of both sea and oceans that most people notice. But there are actually more differences when it comes to both of these area of continuous mass of seawater which cover 70% of the earth’s surface. Seas and oceans have different depths, zones, climates, and even marine life. Here some Differences Between the Ocean and The Sea

Oceans are a large expanse of salt water which cover about three-quarter of the earth’s surface. They are bounded by the continents, or the equator, and other imaginary lines. There are seven main oceans in the Earth, North Atlantic, South Atlantic, the Arctic, North Pacific, Indian and Antarctic Oceans. Thus, an ocean is interconnected mass of saltwater, covering 71% of the the earth’s surface and contains 97 percent of the planet’s water, where boundaries are established by continental land masses, or the equator and ridges in the ocean. 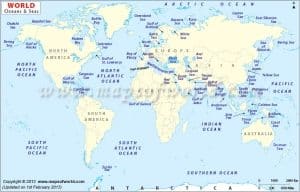 Sea, on the other hand, is a body of salt water that is surrounded by land on all or most sides or actually is part of one of the oceans. Major seas include the Baltic, Mediterranean, Bering, Caribbean, Black, Coral, North, Red, and Yellow.

There are Differences Between the Ocean and The Sea in term of Depth, as follows: 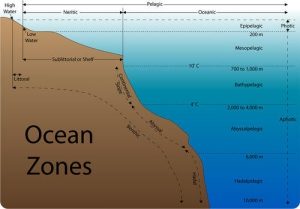 Oceanographers divide the ocean into different zones depending on the present physical and biological conditions. The oceans are further categorized into zones by depth, light, and other factors. The various different zones include pelagic zone (all open ocean regions), photic zone (surface to 200 meters down) and aphotic zone (depths exceeding 200 meters). Any water in a sea, ocean or lake that is not close to the bottom or near to the shore can basically be said to be in the pelagic zone.

For for further info of the divided zones, the epipelagic zone (sunlight) is closest to the surface and stretches down to around 200 meters. An abundance of light allows for photosynthesis by plants and nutrients for animals like tuna external and sharks. That is also why it is called as the sunlight zone. With the light come heat, this heat is responsible for the wide range of temperatures that occur in this zone.

Begins at 200 meters below the surface and reaches until the depth of 1,000 meters. There is a little light but not enough for photosynthesis to occur. The light that penetrates to this depth is extremely faint. It is in this zone that we begin to see the twinkling lights of bioluminescent creatures. There’s a great diversity of strange and bizarre fishes which can be found here.

The next zone, from 1,000 until 4,000 meters in depth. Bioluminescent organisms can be found in this zone. The only visible light is produced by those creatures themselves. The water pressure is immense in this dept, up to 5,850 pounds per square inch. Despite the pressure, there are a lot of unique animals like the marine hatchetfish external and giant squid also live in this zone, surviving mostly on the detritus that drifts down from the epipelagic zone.

Its located from 4,000 meters to directly above the ocean floor and is a completely dark area home and the water down here is near freezing. It is home to colorless and blind animals, most of them are invertebrates like basket stars and tiny squids. Three-quarters of the ocean floor lies within this zone. The deepest fish ever discovered in this zone is in the Puerto Rico trench at the depth of 8,372 meters.

The Hadopelagic Zone (The Deepest)

The deep water in ocean trenches. Some define the hadopelagic as waters below 6,000 meters, whether in a trench or not. Very little is known about this zone, and very few species are known to live here. Theses areas are mostly found in deep water trenches and canyons. The deepest point of this zone is the Mariana Trench off the coast in Japan. The pressure here is an incredible eight tons per square inch. Despite the pressure, life can still be found here. Invertebrates like starfish and tube worms actually live here.

While seas have their own particular depths, they are not as deep as most oceans. Thus these ocean zones often are not used be applied on seas. Though not really used to measure the depths of the seas, the deepest part of the seas arguably have the same depth and pressure like bathypelagic zone of the ocean zones.

In term of Marine life, especially ecosystems, as well as food chains, Both of Sea and Ocean have their own characteristics, such as: 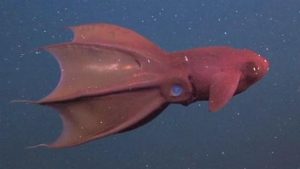 If animals that live in the sea are quite common, a lot of oceans’ creatures are considered uncommon and bizarre and they all are very adaptable with harsh environments since they’re far from land and live in the deep.

Whales and sharks are considered common and some of them live in the oceans too, but a lot of oceans’ creatures are uniquely adapted to life in limited light, extreme pressure, and corresponding frigid temperatures in the depth. Some animals that live in the oceans are the vampire squid, an alien-looking creature that is able to invert its body to fit inside its long tentacles.

Another one is deep sea anglerfish, they can vary in length from a few inches up to over three feet, it is a bioluminescent creature. Snake dragon also lives there, it is a fierce predator who can live in total darkness. Other than that, amphipod also lives there. They are bioluminescent too and can camouflage well. It is also the staple food for other ocean creatures. There is an eel which lives in the ocean too called gulper eel. It is not a true eel but rather a specie of ray-finned fish. (See also: Waves in Ocean)

Creatures in the Deepest Part

There are other creatures who live in the even deeper parts of the ocean like deep water squid and octopus. They are usually completely transparent and very huge compared to other squids and octopus that live in the seas. Basket stars are another deep ocean creature that flourish on the seafloor. They have flexible arms that can raise above them to catch floating and falling organic particles. (see also: Ocean Pollution)

Sea pigs also live in the deep, they plow through and eat mud, they digest the organic particles and bacteria much like earthworms. Sea spiders that are relatives to crustaceans alse live in the bottom of ocean. They have long legs and suck their meals out of sessile animals. They are vary in size, ranging from that of a small spider to over a 30 centimeters leg span. Large shrimps also live down in the ocean floor, they have no eyes and their color is red. That’s a good thing for their adaptations in the lightless environment.

Overall, oceans’ creatures are just more adaptable to the harsh environment of the oceans. For creatures like the beaked whale, which is arguably the deepest diving cetacean, pressure is definitely an issue. But they have a wide range of adaptations to accommodate their deep sea lifestyle choices. For example, the lungs of these creatures are completely compressible, meaning that they can force all of the gases in their lungs into their bloodstream and muscles where it can essentially dissolve under the pressure. These organs are adaptable to hold more myoglobin and hemoglobin. (see also: Ocean Natural Resources)

This collapse of the lungs also prevents gas exchange at the alveoli, therefore it could prevent nitrogen from entering the bloodstream, which would result in the infamous ‘bends’ that humans that are also deep-sea divers can experience in they rise from great depths too quickly. More importantly, one experiences the bends when dissolved gases emerge from the solution as bubbles in the bloodstream, which then can be damaging or even deadly. Many deep ocean living creatures like whales have naturally learned how to rise slowly through water, decompressing just as human do to prevent this painful condition.

Without those air pockets in their body cavities and tissues, deep-sea creatures are no longer susceptible to the same pressure that our bodies feel. Furthermore, while some creatures do have air in their ear canals (and some even have sinuses in their head cavity), the tissues lining these cavities are often highly flexible, and can readily expand, thus forcing out any air and preventing the pressure differential.

In addition, even if they are adaptable, there are limits for deep sea or ocean creatures. Below a certain depth, advanced creatures with complex organ system like those other than anemones, worms, and particular arthropods, they simply can’t survive. What allows these fishes to dive depths over 25,000 feet is the presence of a particularly hydrophilic substance called trimethylamine oxide (TMAO), which prevents the distortion and compression of proteins and other vital molecules within the body under intense external pressure.

However, at even more extreme depths, that molecule can no longer protect fish from that fundamental physiological compression, so there is a depth limit for fish and marine creatures. For those bizarre creatures that exist at the very bottom of the ocean, study is extremely difficult because they will actually die due to a lack of pressure when they are brought to surface. Their membranes are very uniquely adapted that they can’t maintain their integrity under anything but extreme pressures.

Those are complete explanation about What is differences between the ocean and the sea.

12 Causes and Effects of Tsunami You Must Know