Small, round, spiny. Yeah, that is most suitable words to describe what sea urchin is. Sea urchin is member of phylumechinodermata and belong to echinoidea class. Sea urchin classified into omnivora, and their main food are algae, sea weed, sea grass and also another sea particles, such as: dead fish, sponges, or shell.

There some variety colors which make sea urchins so beautiful, like green, brown, purple, and red. Sea urchins is not something hard to found when you’re in beach, because it lives all around the world but rarely in polar.

Sea urchin usually found in shallow or hide in coral reefs. Size of sea urchin only around 4-5 inch (the largest can reach 14 inch) and 95% their body is spine. Length of the spine are around 1-3 cm in length, 1-2 mm thick (less or more) and also has poison inside them.

Between spines, there also five tiny tub-feet which help sea urchin to catch the food and hold on into ocean surface. Spines of sea orchid not only be used for protect themselves from predators, but also for their movement. Some predators of sea urchins are: sea star, trigger fish, crabs, otters, also humans. 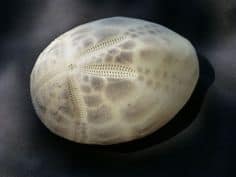 This type also known as Sea Potatoes. Shape of this urchin is oval with the mouth is on bottom of urchin, and anus on opposite of the body.

Unique location of mouth and anus make them look like as heart and  that’s why its called as heart urchin. Its also belong to irregular urchin because their oval-shaped, and not round like the “regular”one.

Another uniqueness from this type is their behavior, in which they usually live in groups and their size isn’t really big one (no more than 5 cm and the largest only 9 cm).

Meanwhile, length of their spines also unique too, can be the long or the short one. However, it doesn’t make them really different from another type because the function is still same.  They also has some colors, like brown, yellowish-brown, red, and green.

Common heart urchin has two gender, which male and female and do their reproduction by external fertilization; where the male release his sterm and egg to the sea. After  fertilization, the larva needs 20-40 days to grown up until juvinile but they will become an orphan; because their parents will die after the fertilization. They lives in shallow (less than 160 feet deep and the deepest only reach  1,500) and looking for the food from the sand, which they actually live. This type commonly found in South Africa, Japan, Mediteranian, Europe, but you can’t see this at Iceland and Greenland. 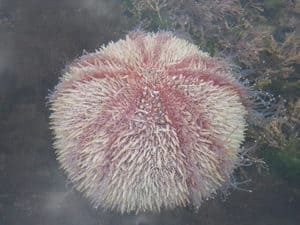 This is the largest urchin in Norway because the diameter can reach until 16 cm (the largest recorded as 17,6cm) and can be found in 1,200 feet deep. This type commonly found in North-East Atlantic ocean and from Sweden to Azores.

They also easily to found in any coasts of Portugal, Spain, France, Belgium, Denmark, Sweden, and Ireland.

Autumn and winter usually become their breeding season and its need around 45-60 days for the larva to grown up to become the adult one.

Meawwhile, this type usually hide behind algae, which can be found in 1,200 meters deep feet.

On the other hand, reddish and purplish are their beautiful colors which make them usually to found by divers.  Good news, this type is edible to eat, and isn’t only egg which can be consume but also their gonads.

Moreover, their beautiful appearance is the reason why its often collected by human because it also can  make into souvenirs. 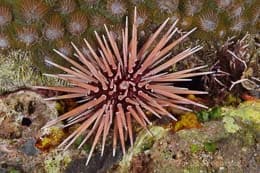 Oval-shaped and has two long tiny pipes and also known as Tropical Sea Urchin. Black spines not only what make this type different from the others; because some researchers say the spine also can be used to enlarge hole in the rock and it will become bigger and bigger as long as the size of urchin.

On the other hand, this type of urchin can be found behind limestone, under rock slabs, broken coral, or among sea weeds. Night is their time to hunt their food, which is an algae and after they get enough food, they will always back into same hole.

Common color of this type are reddish brown, or black in its shade with purple or green on top of it. Needs long time to grow up (like 10 years), and the largest size is 150 mm for the diameter. Places which commonly become their habitats are Carribean, sub-tropic South Atlantic region; from Bermuda until Southern Florida, also island in Carribean to Desterca, Brazil. Different breeding seasons is what make this unique; like late summer in Florida, peak autumn in Puerto Rico, and variable times through year in Panama. Its also edible to eat, but only their gonades. 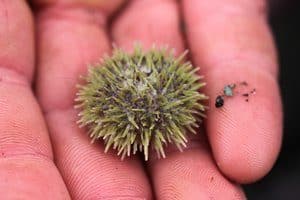 Another noc-turnal urchins, they will hunt their food at night and they will hide until rest of the day. Seaweed is their favorite food, and they also eat algae, kelp, and another organism. Their diameters can reach until 8 cm and usually live in subtidal zone until 1,200 metres deep feet. It can survive in place which lack of salt and will leave their hole while they looking for foods.

Greenish-brown, spines greenish/ reddish, an violet are some colors which make this type beautiful. Its easily to found  in coasts from Alaska to Washington, west part of Baltic sea, and Korea.

Meanwhile, every year, it will grow longer around 10 mm and that’s why it classified as fast growing urchins. This type is edible to eat and become common food for native people in New Brunswick. 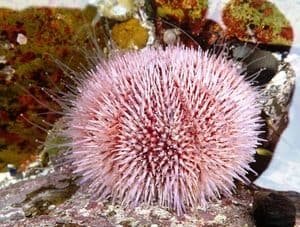 The long one (can reach until 15 cm) with their greyish or greenish color and will change into green as their protection from predator or while they’re getting hurt. Oval-shaped, flat, tiny, and covered with sport spines  are uniqueness from this urchin.

They bit different from another type because of mouth and anus location, which the anus is behind the mouth. Usually can be found at coarse gravel and from shallow until 1,250 deep feet. They become common organism in beach around Finmark until west Baltic, Iceland to Azores, Cape Bosador, also Mediterranean. 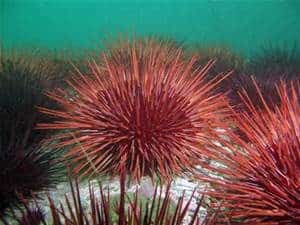 Usually found in Pacific ocean from Alaska until Baja California and in 100 meters deep feet. Common size usually 8 cm and the largest is 19 cm, red and dark burgundy is something which make this urchin different from another ones.

Their age around 7-10 years and it depends by their geographic location. It usually live in stone which will protect them from big waves, but cant live in place which has to much sand or mud.

In Southern California, their age can reach until 50 years beside in British Columbia and Canada can also be longer, and that could be more than 100 years.

There are other types of sea urchins that exist, as follows:

7. Key Hole Sand Dollar (Melitta Quinquiesperforata) : Disc-round, flat, has six holes in their body, and brown like sand as their colors. It can be found under the sand (they hide in it) with the shallow only 0-15 metres deep feet.

8. Pencil Sea Urchin (Phyllacanthus Imperialis) :  Also known as mine urchin, black and brown are usually become their colors. They find foods in night, like intervebrates and sponges; but in day, they will hide at holes in any corals. It can reach until 15 cm for own sized and usually found in Carribean

9. Purple heart urchin (spatangus purpureus) : Has white spines and the length can reach until 12 cm. Can be found in all coast in English and Ireland, but not in Greenland also north America. Usually hide under the sand and the deepest location is only 900 metres deep feet.

As we can see, there’s lot Types of Sea Urchins and has their own uniqueness. Fortunately, we do not have to diving to deep for see their greatness because they usually live in the shallow or behind the rock or sand. Ah, and you have to remember to not step in their body because they will hurt you with their spines and furthermore, the poison.  So, are you ready for explore more about the sea and know closer about its creatures? Ciao!

4 Effects of Ocean Currents on Human and Marine Life

Acidification of The Ocean – Causes and Effects