Home » Creatures » Top 15 Biggest Fish in Amazon You Must Know

Top 15 Biggest Fish in Amazon You Must Know

This article will be listing 15 Biggest Fish in Amazon. The Amazon is a home to wildlife in their jungle as well as their river. It consists from the smallest creatures to the biggest ones. Read on to find out more about the biggest fish creature in the Amazon river. 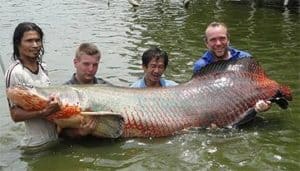 Araipama are giant fish that have lived for a very long time in the Amazon river. Sometimes they are also called pirarucu or known as paiche. Their length is around 3 metres and weigh 200 kg. Araipama fish have extremely sharp scales. Furthermore, they also have teeth on their tongue.They feed on other small fish.

Occasionally, they also eat birds or other animals living on land by jumping out of the water. Arapaima fish usually swims near the surface of the water so they can take in oxygen through their gills. Unfortunately, that causes them to be a quite easy target for fishermen.

See also: Animals in the Ocean Biome – Causes and Effects of Tsunami 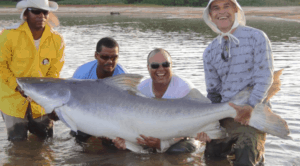 The Piraiba catfish currently holds the title as the biggest kind of catfish in the Amazon waters. It is reported that they can weigh up to 204 kg. For length, they can be as long as 3 metres. However, their large body does not hinder them from being a very active fish in the water.Their food consists of other small fish.

However, they can also eat monkeys or birds. Additionally, they are known to feed on humans. There are reports that some Piraiba catfish attack humans and swallow them whole. 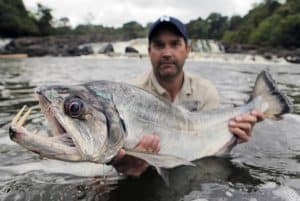 The Vampire fish earn their name from their distinctive teeth. They have two sharp fangs resembling those of vampires. Those teeth are 10 cm to 15 cm long. (Also read: Facts of Blue Whale)

Other than their long fangs, they also have a long body that can reach up to 1.17 metres. They can grow into heavy fish since they have a minimum body weight of 18 kg. (Read more: Types of Algae)

These predatory fish are considered to be the scariest creature in the Amazon river since they can consume other creatures that might be bigger than them. They are known to cause the death of many fishermen and divers. 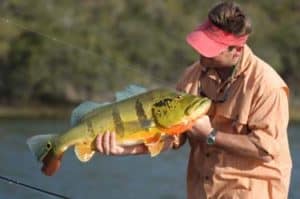 Another big fish of the Amazon is the Royal Peacock bass. They weigh around 12 kg. Some fishermen has caught some that measures up to 71 cm. The Royal Peacock are recognizable by their mouths that are very large. Thus, it is easy to prey on any other small fish.

Other than that, they also have about six or seven dark bars on both sides of their bodies. They prefer to swim near the shore or inside waters close to the jungle. 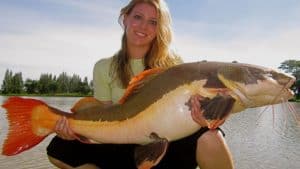 The Redtail catfish are very common catfish in the Amazon. They can be 1.8 metres long and weigh around 80 kg. It is reported that they can also live up to 40 years.

The Redtail catfish have a brownish, black belly with a hint of white. As for their tails, they are red or bright orange. That’s why they are called Redtail. (Also read: Conservation of Coral Reef)

Moreover, the catfish live around trees that are sunk and in trenches or holes inside the river. The Redtail are also very popular for large aquariums. As long as they are not overfeeding, then they will not die.

See also: Climate of the Ocean – How to Prevent El Nino 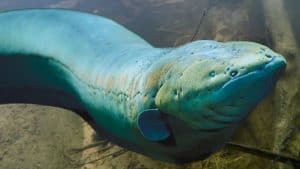 The Electric eel in the Amazon are said to be related to the catfish rather than eels. These electric fish are 2.5 metres long and weigh around 20 kg. (Read more: Types of Sea)

Other than that, they are dark gray with yellowish undertone on the belly. The Electric eel can produce electricity up to 600 volts. A person might not die from a single shock but multiples exposure can cause heart attack or respiratory failure.

However, a single shock can paralyze and cause someone to drown to their death. For food, they eat other fish, birds or amphibians. They kill most of their prey by using their electric ability. 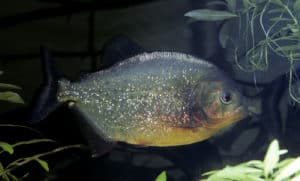 The Red-Bellied piranhas have a gray bodies with silver scales that seem to shine with red bellies. As for the females, they are a bit different as their bellies have a darker red than the males. (Also read: Facts of Dead Sea)

They can grow up to 50 cm and weigh around 3.9 kg. Although piranhas are usually portrayed to be dangerous and have a huge of appetite for human flesh, they actually do not attack unless they are provoked or starving.

Also, they feed on other small fish, worms, insects and crustaceans. They travel in school and they are also popular for aquariums collection. 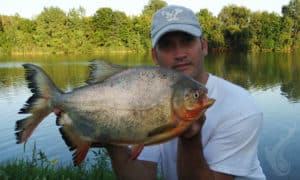 Pacu are slightly related to the piranhas but they are larger. Their length reaches 1.08 metres and can weigh up to 40 kg. Although the piranhas have sharper teeth, the Pacu are different. Their teeth are straight and small, similar to those of humans. Additionally, they don’t eat a lot of meat like piranhas do. (Read more: Marine Protected Areas)

They mostly eat fruits or nuts that drop from the trees in the Amazon. For that reason, they are often called vegetarian piranhas. Pacu are also known for their delicious meat. Now, they are farmed or put in aquariums by people for different reasons. 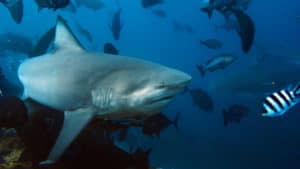 A particular kind of sharks that live in the Amazon are the Bull sharks. Just like any other sharks, they display aggressive behaviours. They can grow up to 3.3 metres. There are also reports that they weigh around 312 kg.

Their teeth are sharp and triangular. The Bull sharks are known to attack humans. However, they much prefer to eat other small fish or sharks, birds, dolphins, turtles and stingrays.

Also read: Facts of Whale Shark – oceans in the world

When they get hungry, they look for prey in murky water since it will be harder for the prey to know their prescence. As an additional fact, this type of shark has been said to be one of the world’s most dangerous sharks. 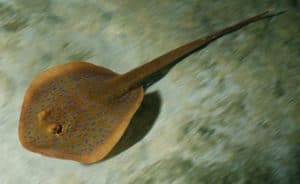 The Pancake stingray definitely live up to their name. They are round with brownish and yellow tone resembling a cooked pancake. These stingrays are very large as they are usually 5 metres long. Moreover, they are heavy as they can weigh up to 600 kg. Their tails contain poison that can kill their enemies and they are around 38 cm long.

They prefer to reside at the base of the river and bury themselves. Therefore, they are not the easiest fish to spot. They feed on crabs and clams. They do not attack people but there are reports that they do attack boats sometimes. 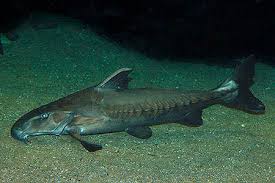 The Niger catfish is also often called the ripsaw catfish. They are found in the Amazon river but also spread out to Brazil, Peru and Venezuela. In length, they are around 100 cm long. For weight, they can weigh up to 13 kg. There are thorns on their bodies that could harm predator or whoever is handling them.

They feed on crustaceans and lake flies. They are often put in aquariums when they are small although none of them has ever been born inside the aquariums.

Another kind of catfish swimming in the Amazon river is the Tiger Shovelnose. They are long since most of them are 1 metre and weigh up to 27 kg. These catfish prefer to swim in shallow water rather than the deep. On their bodies, they either have stripes or spots. (Also read: Volcanoes under the Ocean)

They eat other fish, crabs or shrimps. People like this fish for their meat. Their meats are often described as delicious.

Arahuana are related to the Araipama fish. They are very long as their recorded length is 90 cm. As for their weight, they are about 200 kg.

So they are quite huge just like the Araipama. They can eat insects, spiders and birds who are perching low near the water since these fish can jump out. Therefore, they get the nickname of monkey fish.

Also, they can eat other fish that weigh 10 kg. Since they have shiny scales, they are also often called dragon fish. The Silver Arowana remains silver throughout their life. 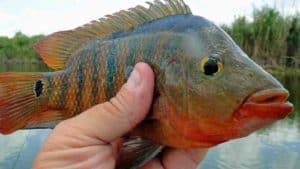 Oscar is a pan fish that lives in the upper part of the Amazon river. They are quite huge with the length of 45 cm.  For their weight, they commonly weigh around 1.6 kg. These fish are dark in colour with yellow spots. They are said to have the ability to change their colours. (Read more: Differences Between the Ocean and the Sea)

The Oscars usually swim around logs, falling trees or other floating materials. Some people catch this fish to sell them for their meats or simply as a fish collection in aquariums. 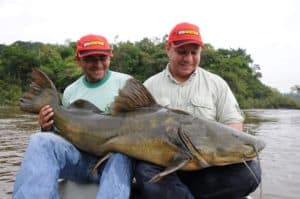 The Jau catfish is another kind of catfish that are very popular in the Amazon. They have long bodies since their length could reach 140 cm. Then, they are dark olive in colour. Moreover, they weigh up to 50 kg. It is a very strong catfish. (Also read: Ocean Sediments)

Other than that, they swim in the upstream or muddy riverbed. Just like the Oscars, people also hunt for this fish as a hobby, for commercial reasons or for their aquariums.

It is incredible to see enormous creature that lurks in the Amazon river. As long as they live undisturbed from pollution or other factors that could harm their habitats, then they could have a long lifespan. Although people fish these creatures out, most of them are released back into the water to avoid their extinction.