Tortoises are highly expensive due to their magnificent shells and can cost extraordinarily high prices on the international black market. Efforts to steal the animals from their native are relentless. This desperate condition has caught the conservationists attention into seeking the significant attempt to save one of the world’s most endangered animals. Conservation of tortoise requires more attention from the people in order to keep them from the extinction that’s mostly caused by commercial purpose.

Angonoka Tortoise (or Ploughshare Tortoise) is one of the most demanded tortoises due to its distinctive gold and black shells. This tortoise has been on the critically endangered list with only 600 numbers left in the wild. This animal has been a victim of poachers who want to take advantages of it. The species can barely restock itself rapidly due to the slow reproductive cycle.

Get to Know the Tortoise 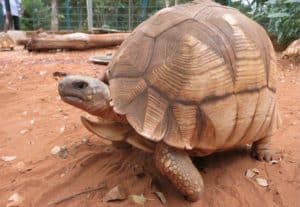 Tortoise is a reptile that belongs to family Testudinidae. Tortoise is a land-dwelling or terrestrial animal as it lives entirely on land. It has a shell around its body that protects it from the predator. The top part of the shell is the carapace, the underside is the plastron, and there’s a bridge that connects the two.

Tortoises are unique among vertebrates as the pectoral and pelvic girdles are inside the ribcage rather than outside. Tortoises can vary in size from the tiny, which can be a few centimeters, to the giant ones, which is up to two meters.

Most land-based tortoises are herbivores. They feed on grasses, leafy greens, weeds, flowers, and some fruits, although some omnivorous species are in this family. Some certain species consume worms or insects and carrion in their typical habitats. A high portion of protein is detrimental in herbivorous species since it has been associated with shell deformities and other medical problems. As different tortoise species vary greatly in their nutritional necessity, it is fundamental to closely research the dietary needs of individual tortoises.

Tortoise is oviparous. In the nesting burrows, female tortoises can lay from 1 to 30 eggs. Typically, the egg-laying occurs at night, after which the mother tortoise covers her clutch with sand, soil, and organic material. The eggs are then left unguarded. Depending on the species, it takes from 60 to 120 days for the eggs to incubate. Upon completion of the incubation period, a complete formed hatchling uses an egg tooth to break out of its shell. It digs to the surface of the buried nest and starts its own life of survival.

Tortoise is one of the most long-lived reptiles. Average tortoise can live up to 100 years. According to a few theories, this long lifespan is due to the slow rate of their metabolisms, naturally healthy lifestyles and evolutionary theories regarding reproduction.

The Attempts at the Conservation of Tortoise

There are many species of tortoises on different islands and have different appearances. Some live alone and some others are still able to breed. There are some efforts to conserve the tortoise from getting close to extinction. An international organization that has worked over a half century in wildlife protection is World Wildlife Fund (WWF). WWF has been working to protect the world’s species. They work with many actors, locally and globally, including local communities and multinational corporations, governments, and NGOs, finance institutions and development agencies, consumers and researchers.

Tortoise is one of the protected animals to be in WWF conservation. WWF ensure all the rare tortoises that live in the wild are healthy WWF also help finding a mate to the species that is nearly extinct. There was once a last surviving land tortoise from Pinta Island, one of the northern islands in the Galápagos. It’s a giant tortoise that often called “Lonesome George”. For more than three decades, people tried to save the Pinta subspecies by finding George a mate. Unfortunately, they did not succeed and as Lonesome George’s passed away, there would be no more Pinta Island tortoises.

A. Protection of native tortoise in a national park

Besides the high demand for shell products, a threat that haunts tortoise is habitat destruction. The initiative to conserve the tortoise can begin by establishing a national park in the native habitat. This occurs in Baly Bay, in the northwest Madagascar. The only habitat for Ploughshare Tortoise was once a remote and arid stretch of sand, rock, and bamboo before the conservationist turned it into a national park.

B. The tortoise shell’s marking

Conservationists have tried many ways to save tortoises from threats. To avoid the tortoise trade, they even take a drastic action. They permanently engrave the tortoise shells to make them less desirable. The tortoises get their shells engraved with the initial of their native as a large serial number. Madagascar tortoises get an “MG”, for Madagascar, on the top of their shells.  The engraving is several millimeters deep and only penetrates the shell. It doesn’t reach the more sensitive bone underneath. Although the process may be uncomfortable for the animals, it does not hurt them. Conservationists hope that this action will make the tortoise less attractive to the poachers, so there be less tortoise to be in the market.

The fight against animal trafficking requires attempts to keep the endangered species from being stolen for commercial purpose. Since there are unresponsible traders seek many ways to gain access in order to steal the tortoise, the protection needs to climb into a higher level. The habitat where the endangered and vulnerable tortoise live needs to turn into a national park to offer better protection. Local people get involved to patrol the area and to keep watch on the animals. To get this animal watch more intensive, some parts of the area is fitted with radio tags. Hopefully, those poachers who want to steal the tortoise won’t slip from the sight.

The oldest tortoise alive until this day lives on the island of Saint Helena, a British Overseas Territory in the South Atlantic Ocean. His name is Jonathan.

He probably hatched in 1832 due to the fact that he’s ‘fully mature’, which is 50 years old when first brought to Saint Helena. Along with three other tortoises, Jonathan was brought to the island from the Seychelles in 1882. In the 1930s, Governor Sir Spencer Davis named him.

Until this day, Jonathan continues to live on the grounds of Plantation House, the official residence of the Governor and belongs to the government of Saint Helena. If it’s true that Jonathan was born in 1832, it makes him the oldest living tortoise and also the oldest animal on land. Nevertheless, there are some rumors about a tortoise in India that lived until 250 years but hasn’t been proved yet.

The Aldabra Atoll, where this species inhabits, is only three to six feet above sea level, and the scientists are predicting the world’s oceans to rise as much as four feet (about a meter) by the year 2100.

Although Jonathan is very much still alive, his age has caused him some physical trouble. He’s blind from cataracts and has lost his sense of smell. These make him unable to detect food. Until a few years ago, he consumed an unhealthy diet of twigs on the British island territory of St. Helena, off Africa’s western coast. Fortunately, in 2014, local veterinarian Joe Hollins noticed Jonathan’s plight and started giving the reptile a more nutritious menu, which includes apples, carrots, bananas, cucumbers, and guava. Thankfully, a year later, Jonathan is back in the news—and seemingly healthier. The feeding has improved him and makes him feel young again.

People’s involvement in the conservation of tortoise

Conservation of Tortoise requires attention from all of us. Protect them in a national park and guard them with high protection system will avoid the tortoise trade. To keep them alive and well, nutritious foods are mandatory. If you want to take a part in the attempt, you can donate to any trusted protection group. By donating, you can help the tortoise keepers to keep the site and all their services up and running. You can also symbolically adopt the species through WWF to support the effort to protect wild animal by buying the adoption kit that includes plush, photo, adoption certificate, species card, and gift bags.

Tortoises and turtles are both reptiles from the order of Testudines but belong to different families. Tortoise is a member of family Testudinidae, while some of the turtles belong to some different families. The physical difference to notice between the tortoise and the turtle is their shells. A tortoise has a dome-shaped shell. Its feet are short and sturdy. Its bent legs are directly under the body. A turtle’s shell is flatter. Most land-based tortoises are herbivores while turtles are either herbivores or carnivores. Average tortoises can live about as long as humans, around 60-80 years, while turtle commonly lives around 20-40 years. Some tortoises have been known to live more than 150 years.

Those are complete explanation about the attempt of conservation of tortoise, one of endangered sea animal in the world. especially in ocean.

Top 25 Simple Ways to Save the Ocean