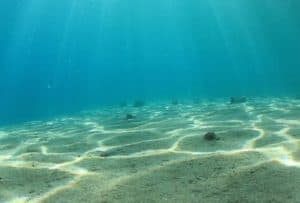 Most parts of the sea floor are covered in sediments, and the sediments are formed by several different sources and are highly variable in their composition. The material can be different and it depends on the proximity of that sea floor to a certain continent, depth of the water, the currents of the ocean, biological activity and climate.

Ocean sediments can be defined as the unconsolidated accumulation of inorganic and organic particles on the ocean floor. Sedimentary rocks and sea floor sediments’ thickness range from a few millimeters to several tens of kilometers. The ocean floor sediments, near the surface, remain unconsolidated; however at deeper ocean floor such as hundreds to thousands of meters, the sediments become lithified. Scentists discovered that seafloor is relatively young because there is no sediments that are older than 150 million years were discovered. 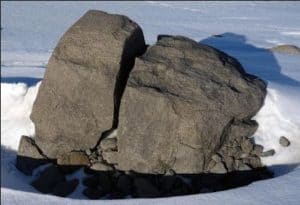 Terrigenous sediment can sometimes be called as the sediment in which it is derived from the products of weathering of rocks at or above the sea level and the erosions of the continents or islands (formed by weathering). (read also: Causes and Effects of Tsunami)

Things such as continental rocks and different particles are most usually brought from the land by the carriers mentioned above to the ocean and transported as dissolved and suspended loads in longshore currents, waves and rivers. (read also: Facts of Dead Sea)

Furthermore, terrigenous sediment is contoured by the strong currents along the continental rise. Terrigenous sediment is mostly dominated by non ferromagnesian minerals: quartz, micas, feldspar and ferromagnesian or iron magnesium bearing minerals: iron oxides, clay minerals, and other terrestrial organic matter. The sediment tends to be relatively coarse, typically containing sand and silt, but in some cases even pebbles and cobbles. This sediment predominates near the continents and within inland seas and large lakes. (see also: sea erosion) 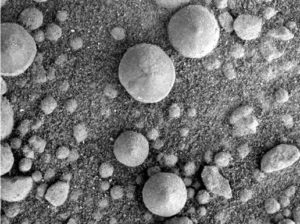 Another example of terrigenous sediment is mud, which is made of clay and slit. The color of the clay represents the chemical found in that clay, for example, red clay is rich in iron. Clay settles slowly in near shore environments, but much of it is dispersed far through ocean currents.

Over wide areas in the deepest part of the ocean, clay minerals are predominant and most if this clay is terrestrial in origin. Because clay is brought by the currents, it settles everywhere in the oceans, but in certain area such as pelagic silica and carbonate sediment, the minerals dominate over clay. (see also: Endangered Seahorses) 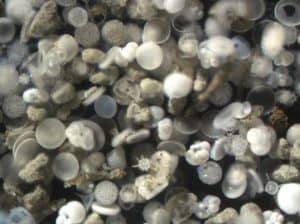 Some may call this sediment biogenous sediment and this sediment roughly covered 75% of deep seafloor and one of the most important constituents of ocean sediments. This sediment is composed of clay particles and microskeletons of oceanic organisms that sink slowly through the water column to the ocean floor. The grain size of this sediment is typically less than 0.005 millimeter.

The most common organisms found in this sediment are mollusk shells, coral and even microscopic planktonic shells. Planktons such as zooplankton and phytoplankton that have been dead can be found in the deep ocean’s biogenous sediment. (see also: Sea Salt Facts)

Because of the life span of most of these organisms is on the order of weeks, there is a continuous and slow “rain” of the remains of those organisms to build successive layers of sediments. Below is the most important biogenic material that forms a biogenous sediment:

Different organisms release different minerals, for example foraminifera. Foraminifera that mostly live near the surface in the ocean water make their shells (tests) out of carbonate minerals such as calcite. Dead foraminifera will derive to the pelagic carbonate sediment. Another example is oceanic organisms, diatoms and radiolarians. Both of these organisms make their tests out of microcrystalline quartz, silica. These organisms are deriving the pelagic silica sediment. (see also: ocean animals)

Some of these organic sediments are called calcareous or siliceous “oozes” because they are so thick and gooey. About one half of the deep ocean floor is covered by oozes. The difference between the calcareous and siliceous lies, respectively, in the calcium carbonate (CaCO3) and silica (SiO2) percentage of the sediment. If there is more than 30% calcium carbonate presents in the sediment, then it is called calcareous ooze. If there is more than 30% silica, then the sediment is called siliceous ooze. (see also: How to Prevent El Nino)

This 30% rule of thumb also applies to other part of sediments, for example, if ooze is containing more than 30% of foraminiferal shells then it is called foraminiferal ooze. In short, if the biological constituents exceed 30% by volume, then the deep ocean sediments are usually classified on the basis of their biogenic components. However, if there are less than 30% of the biological constituents, then the deposit is called deep ocean calcareous or siliceous clay, red clay or brown mud. (See also: Ocean Coral Reef)

There are two most important factors that control the composition of the biogenous sediments in the deep ocean floor, which are the fertility and depth. Fertility controls the supply of the one-celled plants and animals remains, while depth is related to the water pressure that controls the chemical reaction of the dissolution of the carbonate. 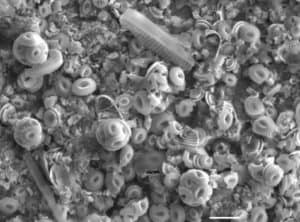 Siliceous ooze is common near the South Polar Region, south of the Aleutian Islands, along the equator in the Pacific, and within large parts of the Indian Ocean. It typically occurs in areas in which the surface water contains a high phosphate values (high fertility).

Carbonate ooze is widely distributed in all the part of ocean, within equatorial and mid-latitude regions and typically occurs at the depth of 3000 to 4000 meters. The distribution of calcareous ooze is largely controlled by dissolution process. There are other biogenic minerals present such as apatite which is a phosphatic mineral, celestite a SrSO4 mineral, barite mineral.

Organic matter is also an important component of biogenous sediment, although it is not a mineral. The organic matter comes from the oceanic organisms that do not have tests and when they died, what is preserved from them is the organic matter. Averagely, only 1% organic matter that sinks to the ocean floor is preserved and this amount depends on the production and the preservation efficiency. (see also: Marine Disasters)

Generally, the wind from the land carries the clay component or sometimes volcanic ash to the ocean and falls on to the surface of the ocean. Because of the active volcanic presence, pelagic sediment is the least abundant on the crest of mid-oceanic ridges. (see also: Climate of the Ocean)

Hydrogenous sediment is the sediment with the richest minerals that are the result of the precipitation from seawater to the ocean’s floor, such as:

In other words, this sediment is formed directly from the chemical processes in the ocean (direct precipitates). In a more shallow sea, such as the area near islands and on continental shelves, rock salt, sulfates and calcium salts may be found on the ocean floor. (see also: Salinity of Ocean Water) 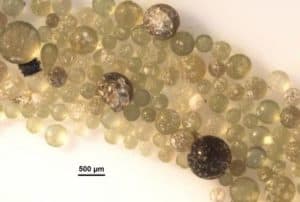 The name suggests the origin of this sediment; it is originated in the atmosphere or deep outer space (cosmo).

Extraterrestrail objects such as particles from cosmic dust, micrometeorites, comets or other bodies land in the ocean and settle slowly to the ocean floor and that makes cosmogenous sediment.

One of the deposits that include in cosmogenous sediments is tektites. Tektites are the result of collisions of extraterrestrial materials. (see also: Global Warming in Ocean)

When there is a collision, fragments of the Earth’s crust melt and spray outward from the impact crater, when it falls back trough the atmosphere, the material melts again and forms ‘glassy’ tektites.

Another classification of ocean floor sediments is by the size of the individual grain; this is a more unusual way to categorize ocean floor sediments. The size is from the smallest to largest, these are: clay (less than or equal to 4 micrometer), silt (4 to 62 micrometer), sand (62 micrometer to 2 millimeter), and more than 2 millimeter such as granule, pebble, cobble and boulder. This grain sizes is classified by using Wentworth scale and the diameter of the grain. About 40,000 tons of the mentioned particles arrive from outer space and accumulate in ocean sediments each year. Their sizes range from 0.1 – 1 mm and typically have a spherule shape. (See also: Marine Energy)

Some may also classified the sediments in the ocean basing on their origin and it consists of 3 major components: 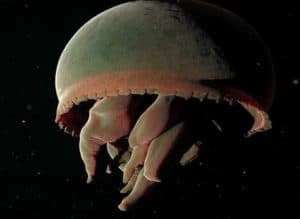 Ocean floor sediments provide a habitat and nutrients needed by deep sea animals and plants, especially those plants cannot undergo photosynthesis due to the lack of sunlight. Those animals are called the benthic species or the bottom-living species.

These habitats form one of the richest biodiversity in the oceans and perhaps on Earth. However, it is still hard for scientists to further study about this issue because of the accessibility to the deep ocean.

Those sedimentary organisms can only depend on phytoplankton and other organic material that settles slowly to the sea floor.

Many benthic species rely entirely on the sea water above them to supply food. Most deep ocean sedimentary environment are thought to be food limited because the amount of material reaching to the bottom decreases and the water depth increases. (see also: Ocean Natural Resources) 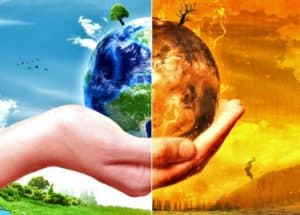 From the above explanation, logically, there will be millions or even billions of tones of sediments that are accumulated yearly in the ocean floor.

Interestingly, ocean sediments may become the indicator for the climate conditions and its changes. (see also: Ocean environment)

The way to indicate the climate record is by examining the biogenic components (remnants of planktonic and benthic organisms) in the ocean sediments. The organisms that have lived near the ocean surface in the past may be dead and released a calcium carbonate shells.

The type of these shells can give a clue about the past surface water temperature hence the climate because some may only live within a narrow range of temperature.

The chemical in the tests may also reveal the past ocean circulation, nutrient and dissolved oxygen availability, and salinity. Ocean sediment records have been used to reconstruct palaeoclimate changes over a range of time scales, from thousands of years to millions and even tens of millions of years in the past.

By studying the deposits accumulated in the cosmogenic sediments, we may know information about the possible changes in the rate of cosmogenic bombardment as well as catastrophic impacts. The deposits can be a way to estimate sedimentation rate by assuming constant accumulation.

On the other hand, by knowing the forming process and the distribution of the ocean sediments, scientists are able to have a clearer understanding about the ocean sedimentary habitats and its diversity. It is important because that diversity interact with the land organisms, human and the entire planet’s population direct and indirectly.

That diversity may take a role in global carbon and geochemical cycling; also it works as a secondary producer and part of the food chain. The sedimentary fauna may also works as a pollutant metabolism and burial and it contributes as water filtration to improve water clarity and health. Sediment stability and transport also depend strongly on the sedimentary habitats. (see also: Marine Protected Areas)

Unfortunately, physical alteration of the sedimentary habitat is happening due to mankind’s activity such as deforestation, discharge of toxic compounds and agricultural runoff, irresponsible fishing activity. This physical alteration may present a threat to ocean biodiversity. Knowing the importance and the role of this sedimentary habitat, as mankind, we must do our best to protect and preserve the ocean well. (see also:Ocean Phenomena)

3 Main Differences Between the Ocean and The Sea