Sea activities bring some effects on the land. Sea waves that constantly crash against shores change the shape of coastlines. Waves are undulations formed by wind blowing over a water surface. The waves are the result of the turbulence in airflow generating pressure variations in the water. There is an energy transfer from the wind to the water within the wave-generation area. The amount of energy transfer depends upon the wind speed, the wind duration, and the extent of water over which the wind blows.

Waves can erode rocks by abrasion. Abrasion is the mechanical scraping of a rock surface by friction between rocks and moving particles during their transport. Abrasion results from the activities of wind, glacier, waves, gravity, running water or erosion. The intensity of abrasion depends on the hardness, velocity, concentration, and mass of the moving particles.

Abrasion occurs as breaking waves which contain sand and larger fragments erode the shoreline or headland. A wave picks up sediment as it comes to shallow water. Once the wave destructs the land, the sediment wears the rock down. As a wave meets the land, it usually changes direction due to the way the wave drags on the bottom. When these waves change direction they obtain a headland. A headland is a part of the shore that stands out of the ocean because it is made from harder rock than the rest of the coast.

Sea abrasion is associated with the marine process where the action of waves makes up the coastal landscape. This process includes erosion, transportation, and deposition. Erosion refers to the act of wearing away the land surface by water, wind, or ice. Transportation is the movement of sediment by the action of waves. Deposition occurs when constructive waves drop the eroded material. Erosion, transportation, and deposition create landforms that feature the coastal landscape.

While the harder rock becomes the headland, the softer rock that erodes out leaves platforms and hollow areas that form the coastal landscape. The are some types of coastal landform created by the wave based on their shapes, grouped to landforms of cliffs and hollow areas. Erosional landforms dominate rocky coasts, but also exist in association with predominantly depositional
landforms.

A. Shore platforms and plunging cliffs

Rocky coasts fall into three chief types. Two varieties of shore platform (sloping shore platform and horizontal shore platform) and plunging cliff, as seen in the picture below. Shore platforms can form only if cliffs diminish through cliff erosion, which involves weathering and the removal of material by mass movement. 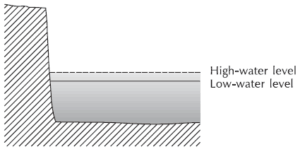 Most plunging cliffs appear through the drowning of pre-existing, wave-formed cliffs resulting from a fall of land level or a rise of sea level. Chalk cliffs at Flamborough Head, Yorkshire is an example of plunging-cliff.

B. Landforms of cliffs and platforms 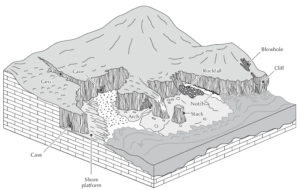 Cliffs are steep or vertical slopes that rise precipitously from the sea or from a basal platform. About 80 percent of the world’s oceanic coasts are bordered with cliffs.

Notches are sure signs of cliff erosion. The rate at which notches grow depends upon the strength of the rocks in which the cliff is created, the energy of the waves arriving at the cliff base, and the amount of abrasive material churned up at the cliff–beach junction.

Ramps occur at cliff bases and slope more steeply than the rest of the shore platform. They develop on sloping and horizontal shore platforms.

Potholes are roughly cylindrical or bowl-shaped depressions in shore platforms that are the result of the swirling action of sand, gravel, pebbles, and boulders associated with wave action.

Bedding planes, joints, and fault planes are all vulnerable to attack by sea abrasion. Although the lines of weakness have eroded out, the rock body still has sufficient strength to stand as high, almost perpendicular slopes, as a cave, stacks, and arch roofs.

A geo is a narrow, steep, and often spectacular cleft, usually developed by erosion along vertical fault planes or joints in rock with a low dip. They may also form by the erosion of dykes, the collapse of lava tunnels in igneous rock, and the collapse of mining tunnels.

A cave is a hollow excavated by waves in a zone of weakness on a cliff. The cave depth is greater than the entrance width. Sea caves tend to form at points of geological weakness, such as bedding planes, joints, and faults. The prime example for a cave is Fingal’s Cave, Isle of Staffa, Scotland, which is formed in columnar basalt.

A blowhole may form in the roof of a sea cave by the hydraulic and pneumatic action of waves, with fountains of spray emerging from the top. If blowholes become enlarged, they may collapse. Lion’s Den on the Lizard Peninsula in Cornwall, England is An example of a blowhole.

An arch is a hollow formed at the promontory base, often at a point of geological weakness. An arch that is significantly longer than the width of its entrance is called ‘sea tunnel’. Merlin’s Cave, at Tintagel, Cornwall, England, is a 100-m-long sea tunnel that has been excavated along a fault line.

The toppling of a sea arch leaves a sea stack. Old Harry Rocks are a group of stacks that were once part of the Foreland. They lie on the chalk promontory of Ballard Down in Dorset, England.

Marine deposition produces coast prograded by waves and currents. The depositional process drops and deposits the materials including sand, sediment, and shingle.

Beaches are the most significant accumulations of sediments along coasts. They form in the zone where wave processes affect coastal sediments. In composition, they consist of a range of organic and inorganic particles, mostly sand or shingle or pebbles.

A spit is a deposition bar or beach landform off coasts or lake shores. It appears in places where re-entrance occurs, such as at a cove’s headlands, by the process of longshore drift by longshore currents.

Barrier islands are elongated offshore ridges of sand paralleling the mainland coast. They are separated for almost their entire length by lagoons, swamps, or other shallow-water bodies, which are connected to the sea by channels or tidal inlets between islands.

Estuaries are tidal inlets, often long and narrow inlets, that stretch across a coastal alluvial plain or run inwards along a river to the highest point reached by the tide. They are partially enclosed but connected to the open sea. They are transition zones between rivers and the sea in which fresh river water meets the salty ocean water.

Marine deltas result from the deposition where rivers run into the sea. A delta will grow as long as the deposition rate surpasses the erosion rate. Deltas exist in a range of coastal environments.

Efforts to protect the land from sea abrasion

As explained above, sea abrasion is a natural process that creates the coastal landforms. Those landforms make the coastal area a wonderful landscape. Moreover, it shows us how strong the sea waves can break the rocks. Although sea abrasion can be dangerous enough to destruct the land, there are some efforts to protect the land from the destructive abrasion.

To combat beach erosion, especially where it threatens the roads and buildings, humans often build sea walls. The building of the sea wall will stop waves attacking the eroding coast, commonly a retreating cliff, and undermining a slumping bluff or a truncated dune. Sea walls often start as banks of earth, but once these collapses, people usually replaced them with stone or concrete constructions.

Beach nourishment or beach filling is the practice of adding large quantities of sand or sediment to beaches to combat erosion and increase beach width. Many beach nourishment programs run at seaside resorts, where humans use beaches for recreational purpose. However, the key to a successful beach nourishment program is an elaborate comprehension of coastal geomorphology. Before developing and implementing the program, it is important to find out the movement of sand and gravel in relation to the wave regimes and the effects of any artificial structures on the section of shore.

Those are some things to know about sea abrasion including the process, landforms, and the efforts. We, as humans, need to keep the coastal area despite the condition. Sooner or later, it will impact on human living around the coast.

Top 15 Biggest Fish in Amazon You Must Know