Common species which can be seen in the sea all over the world. Some scientists say its old as dinosaurs, because their fossils were found since 145-208 million years ago. Their feet  (also known as flippers) is part of them which make  unique because they only have one pair  and can be used for swimming across a sea or do immigration for thousand miles. Even it seems like old and slow one, don’t underestimate them! Sea turtles can swimming for 1,4-9,3 km/hours, and also can dive until 1200 feet!

Become great swimmer doesn’t make them prefer to live under water, instead they choose to live in shallow water or floating between sea weeds bed. Classified into vertebrata make sea turtles need to go to surface sometime to take a breath after dive for some minutes and furthermore, they will come to any coasts for breeding seasons.

To found a perfect coasts for laying their eggs, female sea turtles always has some categories and can swimming across sea for thousand miles to found the best one.

Silence and sandy coasts is perfect coasts to them because it will protect them for any predators who’s ready steal their eggs. Sunshine and some noises are enemy for them too because it will make predators found their baby easily and the baby will  confused how to walk back to the sea.

After female sea turtles reach the perfect coasts, they will digging sands for about 20-40 cm to place their eggs there (so predators cant found it) and will leave their nest after 40-60 days. Predators who’s like to hunt sea turtles are  crabs, birds, rats, another big fishes, and human.

Sea turtles are often over exploitation by human because they have so much advantages for humans and this make sea turtles as endangered one. Like another sea species, sea turtles has some types and almost their type classified as endangered. Here you go, some types of Endangered Sea Turtles List and their unique behavior: 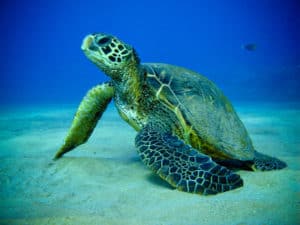 Large one, live in tropical and subtropical coasts and will getting into surface for sun bathe. One type which only  classified into vegetarian, with algae and sea grass are their favorite food, and they will also eat soe crabs, jelly fish, or sponges.

Green is not their primaly colors; gray, black, dark olive, and brown are another colors will make this type as beautiful one too.

Their average weight can until 317,5 kg and their length can reach until 1,5 m.

They have long life span because its need about 20-50 years to reach sex maturity and can lie until 80-100 years old.

Breeding season of green sea turtles usually occurs in late spring until early summer and will occurs every two years after female reach their sex maturity. Their nests usually near sea so after baby sea turtles hatched, it can run easier and faster to the sea and survived for become prey from any predator in the coast.

Some countries are trying to protect this type from over exploitation with make some conservation in: Bali (Indonesia), Sabah (Malaysia), United Kingdom, and Tortuguero National Park. 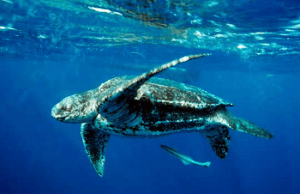 The biggest and longest sea turtles, which their average weights are 300-500 kg and their length are around 130-183 cm. The largest and heaviest was recorded almost 916 kg and 305 cm. Leathery, black and spotted with white or yellow color which make this type different from the others.

Another uniqueness is they can stay for 35 minutes under water and only need once time to go to surface for take breath. Their speed to swim is about 1,-10,08 km/hour and they belong to fast swimmer and  can across a sea for about 6,000 miles to found best coast for breeding seasons.

Breeding seasons usually occurs at tropical areas. Females leatherback sea turtles usually go to North Alaksa and South Africa to lay their eggs and it can be reach 100 eggs each holes. Once baby sea turtles is hatched, their length only about 5-8 cm and it needs around 2 months for incubation. Unlike another type, they might be not come back to coasts where they were hatched because they prefer coasts with soft sand and some dark forested area.

Their lifespan is unkown until now, because some people say it can reach until 30 years, and another people say it can be more than 50 years. Eggs usually preyed by some coastal predators, like: crabs, lizards, racoons, dogs, coyotes, genets, and shore birds. 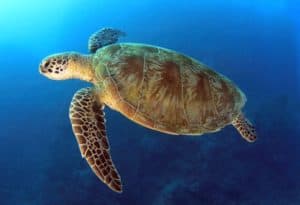 Has massive heads, strong jaws, reddish-brown shells and classified as most abundant species in US water. Heart-shaped carparate and live in the bottom of oceans are their unique behavior which make they different from others.

They can reach until one meters and 113 kg when they’re adult, and the biggest was reported as 454 kg. Jelly fish, conchs, crabs, fishes are their mainly foods and that’s why they classified into carnivore even they also eat sea weed and sargassum too. Their powerful jaws make them able to eats some hard-shelled prey.

Such as whelks, och, clam, and sea urchins. Atlantic, Pacific, and Indian Oceans area their habitat because they live in tropical regions.

Their life span are around 47-67 years old and females will reach their sex maturity when they already 35 years old. After mature, they  will have their mating season every 2-3 years and will back to the coast where they were hatched.

When mating season already started, they usually moved into sub-tropical areas, like from Greece or Turkey to Israel and Libya. In the southern US, mating seasons usually occurs in late May to early Junes and females will lay their eggs between late April and early September.

This type of Endangered Sea Turtles List can be 100-120 eggs each nest and we can know whether they’re males or females sea turtles when they already adult, which males sea turtles has thicker tails and shorter platoons.  Unlike another types, loggerhead sea turtles mostly active during the day (for swimming and resting on the bottom), and will have slow response when night comes. Average duration of dives is around 15-30 minutes and can stay submerged for until 4 hours. 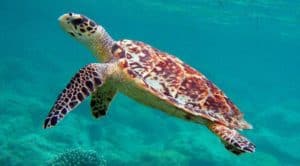 Usually can be found in tropical waters around Indian, Atlantic, and Pacific Oceans. Unlike another type, they choose to live near coasts so they can get sponges easily also can reach nearest coasts.

It has heart-shaped shells and is not really big like another types, only 114 cm and 68 kg.  Sponges, algae, and fishes are their mainly foods and some colors, like: amber, yellow, and brown which make this type different with another types.

This type need 20 years to reach their sex maturity and mating seasons usually occurs every three years. Mexico, Seycheilles, Indonesia, and Australia are places which usually become their nesting seasons and will start around April until November. Usually each net contain 100-140 eggs and needs two months until they’re hatched.

Beside their hard shells make them has less predators, this population  already decreased about 80% over last century because over exploitation and so much illegal trade in some countries. Human not only hunt for their meat, but also their eggs because it can be used as souvenirs, jewelry, ornaments, or traditional medicine.

To protect themselves from any predators, young hawks-bill usually floating among sea plants near coasts because they cant dive yet. 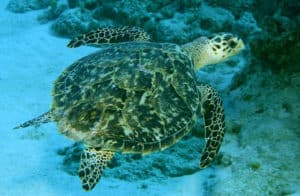 Classified as smallest sea turtles, its only about 45 cm and their weight only up to 100 kg. Usually can be found in shallow waters, while they’re enjoy their favorite food, which are crabs and shellfish. Greenish-grey is common color for their shells and that’s what make them different from the others.

Their life span are up to until 50 years old and usually reach their sexually matured at 10-12 years old. After they sexually matured, their breeding seasons will occurs every 1-3 years and they will back to the beach where they were hatched.

When nesting season started, it will seems different like another types because they usually come in groups in one coast and its usually takes places in Rancho Nuevo, Mexico and needs around 50-60 days to be hatched. Nesting seasons usually starts from April until July and this only type which lay their eggs in days.

Baby Kimp’s Ridley  only 3,8 cm and 14 gram and they will floating between sargassum seaweeds beds for first year. Male and females of this type can be known since they’re hatched; because when the eggs are hatched below 29,5 celcius usually they will become male sea turtles. Colors of this type will also change when they’re mature, like from dark-gray color when they’re young and will become olive green and yellow when they’re adults. 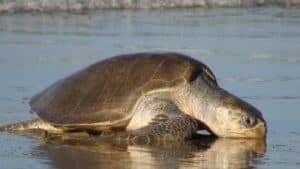 Their name is from heart-shaped shell colors, which will change into olive green when they’re already adult.

Its characteristics are almost like Kimp’s Ridley but this type any found in war waters like Southern Atlantic, Pacific, and Indian Oceans.

Jelly fish, snails, crab, and shrimps and their mainly food and that’s why its classified into carnivores.

Its easily be found in any coasts because they live in shallow waters, only 25-55 meters deep. Nasting season usually occurs from June until December and take places in tropical and sub-tropical oceans. Flat, sandy, and don’t have any sebris usually become their choice to take place for laying their eggs, and each nest can reach until 110 eggs, incubation usually take 45-51 days but if the weather is bad, it can take longer like until 70 days.

All of types sea turtles classified into endangered, and its happened because to much exploitation in their species. Sea turtles most hunted in Tiongkok and Bali, and isn’t only their body but also their eggs. To make this not really extinct like dinosaurs, there’s lot world organization and people who make some conservation or national park to protect and breed this species so it will increase day by day.

Some countries which already try to save this species are Indonesia, Mexico, India, US, United Kingdom, and so on. You can help them so they wont extinct! But how? Well, you can do that through organization, like make some donation or petition so another people will be more aware about sea turtles. It starts form you! So, are you ready to make some good changes? .Then its complete explanation about Endangered Sea Turtles List.