Dolphins are very intelligent animals that all humans love. They are curious, form strong bonds within their pod, and help humans in a variety of circumstances including rescues and with fishing. They perform any acrobatics that entertain us in so many ways. Their chubby figures make people want to hug and be kissed by them. We often see dolphins as large and chubby animals, but some species of dolphins don’t grow more than 2 m. Below are the Smallest Dolphins in the World that will blow your mind by their cuteness. 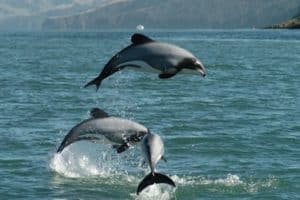 Maui’s dolphins look just like their cousins the South Island Hector’s dolphin but are genetically distinct to them. Although the Maui’s dolphins are one of the smallest cetaceans (order for whale, dolphin, porpoise), they do have a robust, solid and strong body.

Meanwhile, their backs are light gray and their sides have white flashes. They have a whitish underbelly. Their tail, dorsal fin, flippers, and face are all black. There is a black mark between their blowhole and their eyes. The Adult can reach 1.2 m to 1.4 long and weigh up to 50 kg.

Maui’s Dolphins spend most of their time feeding, but they also like to play around with using seaweed, blowing bubbles, chasing and fighting other dolphins and jumping from the water.  Whether the adult or the young, they all do such activities as it’s an important social function. The typical nursing behavior appears through the small nursery groups of mothers and calves. They form such groups to add protection when traveling. The group usually consist of five individuals and sometimes a group will merge with another temporarily.

The breeding rate of the Maui’s dolphin is very low, which makes it hard to replace the population that dies naturally. The females reach sexual maturity between 7 – 9 years of age. They give birth to a single calf every 2 – 4 years. The calves still feed on their mother’s milk for the first 12 months of life, but also learn to eat squid and fish at around 6 months old.

Unfortunately, this species has been listed as critically endangered due to slow breeding and small population. They are also vulnerable to some threats like fishing entanglement, marine pollution and debris, boat strikes, genetic bottleneck, mining, acoustic disturbance and coastal development. 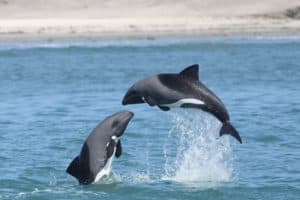 Heaviside’s dolphin is known for their ability to leap vertically out of the water and dive back into the ocean with very little sound or disturbance to the water.

Heaviside’s dolphin is also a fairly social species that enjoys spending time and playing with other dolphins among its pod. Although these dolphins seem to be shy at times, these dolphins love to approach boats, bow ride and follow ships as they pass by. Both male and female dolphins haven’t reached their sexual maturity until the ages of 8 – 10. The average gestation takes about 10 – 11 months. Females give birth to the calve averagely once every three years.

Heaviside’s dolphins encounter several humans threats including accidental bycatch, deliberate hunting, and habitat degradation. Bycatch can occur when a dolphin preys on a captured fish under the net in front of them. Poachers hunt them to sell the meat for human consumption or to use their meat as bait for other preys. It’s also getting more difficult for these dolphins to thrive in their natural habitat. There are high risks of pollution, toxic chemicals collisions with boats and other aquatic vehicles/machinery. 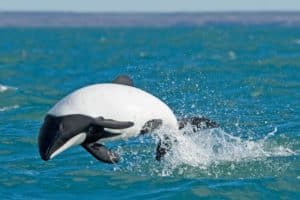 Commerson’s dolphin (Cephalorhynchus commersonii), skunk dolphin, piebald dolphin or panda dolphin is a small oceanic dolphin that lives in the South America. The Commerson’s dolphin has a black head, dorsal fin, and fluke, with a white throat and body. They only reach 1.5 m in length and weigh around 30 kg.

Commerson’s dolphin is a highly active marine mammal. They love to swim rapidly on the surface and leap from the water. They perform various acrobatic stunts and follow the boats pass by in order to observe what’s going on.

These dolphins reach their sexual maturity at around 6 – 10 years of age. Commerson’s dolphin is 11 – 12 months. The calves feed on their mothers’ milk for 9 months long. The threats often come from the poachers that hunted these dolphins to use their meat for crab bait. The fishing net entanglement and the boat’s strike often become their reasons for dying. 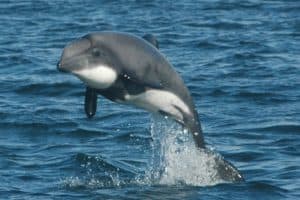 The Chilean dolphin (Cephalorhynchus eutropia), also known as the black dolphin, is only found off the coast of Chile. The Chilean dolphin’s length is around 1.7 m. Their blunt heads make them look a bit like porpoises. Their color is a mixture of varying shades of dark gray with a whitish coloring around their flippers and lower body.Their short beak, rounded flippers, and rounded dorsal fin make it easier to identify them compared to other species of dolphin.

Unlike other dolphins, this species is less socially active. They are more likely to stay distant or flee when coming into contact with humans.

These dolphins become sexually mature between the ages of 5 – 10. While they are fertile, the female dolphins bear single offspring once every 2 – 3 years. The estimated average gestation period for the Chilean dolphin is between 10 – 12 months. On the other hand, one of the threats these dolphins have to face is meat hunting for crab bait. Not only for the crab bait, the meats are also human’s most daily consumption. 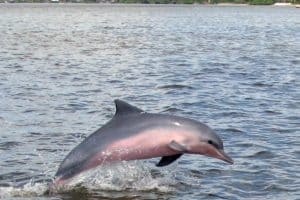 The tucuxi (Sotalia fluviatilis), is a species of freshwater dolphin found in the rivers of the Amazon Basin. Physically, the species resembles the bottlenose dolphin but smaller, that is around 1.5 m long. The color of its dorsal skin is either bluish, gray or dark brown. The lower part of its body is white, light gray or pink.

Since they are a species of freshwater dolphins, this dolphin usually goes to the confluences of bodies of water. It also goes to places near the coasts to search more food.

This dolphin tends to be shy since they are less likely to get close to boats or people. But that fact does not make them not active. They love to spend most of the day doing activities. The way they leap out of the water is pretty impressive.

Researchers believe that the females mate with several males in the same breeding period. Both genders reach their sexual maturity at the age of 6. The gestation period takes about ten to twelve months. The calf is born at some point in the autumn. Tucuxi suffers mainly man-made threats from hunting, accidental drowning in fishing nets, destruction or damage to river banks by human development and pollution along the coasts. The numbers of the total population are still unknown, but it is true that it is vulnerable to the effects of human activities. 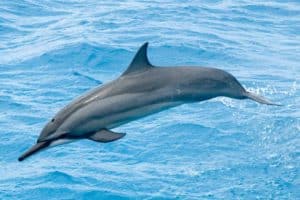 Last Smallest Dolphin in the World is called Spinner Dolphin. The spinner dolphin (Stenella longirostris) is a small dolphin which lives in off-shore tropical waters around the world. Spinner dolphin prefers the open sea and occasionally comes close to the coast only to find food.

Spinner dolphin can reach 1.3-2.3 m in length and 23–79 kg of weight, which males are larger than females. Spinner dolphin’s back is dark gray in color. The shade of gray fades on lateral sides of the body. The belly’s color is light gray or white. Dark grey stripe extends from the eye to the flipper.

Spinner dolphin has a small head, a long and thin beak. There are 45 to 65 sharp teeth on each side of the upper and lower jaw. The dolphin also has a slender body, narrow rib cage and triangular dorsal fin. Spinner dolphins are known as very social animals. They live in groups of 100 to 1.000 animals. Sometimes, they join groups of spotted dolphins and humpback whales while they are migrating. Spinner dolphins like to perform various acrobatics outside the water. They jump, twist and spin in the air. They also ride on the waves produced by boats.

Gestation period in females take 10 months and ends with a calf. Females give birth to the offspring once in every three years. At the age of 6 months, young dolphin starts to eat solid food, but they still feed on the mother’s milk until the age of 2 years. The bond between the mother and her calf is very strong and it can usually last for a lifetime. The number of spinner dolphins in the oceans is declining due to pollution of the sea, stress, commercial and sports fishing and by-catch. The exact number of spinner dolphins left in the wild is still unknown.

Those are 6 types of Smallest Dolphin in the World that you should know. They are cute little creatures that need our protection.