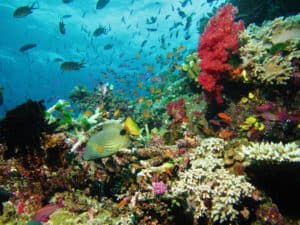 Most of us understand that water fills approximately 70% of the entire Earth. Water has been essential for every aspect. Human, animals, plants, they all need water. Ocean takes up about 97% of Earth’s water. It may be hard to imagine, indeed. The other two percent that is not in the ocean belongs to the glacier and ice caps. Thus, there’s only less than one percent of all the water on Earth is fresh.

Since the ocean has the most water in the earth, what happens to the ocean will somewhat affect the entire living. We can’t just deny that what we do has nothing to impact on the ocean. New science shows us how much our actions may affect much or less the safety of the marine life. It’s nothing else’s duty but ours to protect the life in the ocean. Just because we don’t own responsibility to damage nor save the ocean, doesn’t mean what we do won’t bring any impacts.

You may want to read: Fishes in Atlantic Ocean – Biggest Fish in Amazon

These are 15 Ways to Protect the Marine Life you need to know. You can start protecting the marine’s life from the simplest way you do daily. But if you have more capability, you can take real actions on protecting the ocean and whatever it possesses.

The oil industry causes some threats to cetacean (whale, dolphins, and the others marine mammals) including habitat loss, possible hearing damage, and pollution. Oil exploration and recovery may not include those cetaceans from valuable habitat and disturb feeding, resting and breeding. Researchers have discovered that there are the physical impacts of seismic surveys on whales, dolphins, and porpoises. The use of seismic surveying in undersea has affected heavily on their sense of hearing.

Oil spills that cause the pollution result from the oil tankers which release hydrocarbons, including crude oil intentionally after offloading. The oil spills can also result unintentionally through accidental discharges and leaks. To respond this situation, the government and the company should make a great deal of how to put the right decision that’s safe for anyone.

Ocean dumping throws away all the waste materials from factories and industries, tankers and ships and sewerage waste materials into the oceans and seas. Ocean dumping has been the most used option to throw away the huge amount of waste as it’s cheap and easy.  However, ocean dumping is the main cause of marine pollution. the dumped materials contain poisonous substances that can deplete the oxygen in the water. Non-degradable materials like plastic can’t be absorbed and cycled.

Therefore, it will choke the oceanic creatures if they swallow it and cause them to die. It’s clear that ocean dumping really shouldn’t be the option to dispose of the waste. It only makes the ocean dirty and not healthy for the marine species to live and for the human to swim.

Fish has been one of the main sources of food for human and some animals. Fish are highly abundant in the ocean and we can easily catch them. However, the fish stocks in the ocean have decreased time after time due to overfishing. To be sure, overfishing has some crucial impacts on crashing the life of the marine species. Not only does it work towards wiping out a species, but also the other species of marine animals that feed on those fish to survive. There’s no denying that overfishing can cause marine animals to starve since people are taking food from their areas. The numbers taken are too large for them to be able to get their parts. Hence, banning the overfishing is an assertive action to stop the torture.

Dynamite has been in use for catching huge amount of fish in an easy and quick way. But, the destructive effect of the dynamite is something we can’t avoid. The use of the bomb has destroyed coral reefs, contaminate the water and kill the marine animals savagely. Dynamite fishing is definitely illegal for any reasons. The government must take an assertive step to stop the dynamite fishing. The people must be aware that fishing in such way is harmful, not only for the ocean creatures but also the human. They need to follow the right rule in fishing so there can always be a marine life sustainability.

Driving a more gas efficient vehicle means that you save more energy. Although it’s not very clear, there’s actually a direct connection between the energy you use and the ocean. Most of the fuels used today result from the development of fossil energy, including natural gas, oil, and coal. Mining, logging and material extraction related to the development of fossil fuels destructs habitats on land and in the ocean. The transport of fossil fuels also has a big responsibility on the oil spills. By choosing a more gas efficient vehicle, the amount of energy demand will decrease. When the energy demand decreases, the attempt to exploit the fossil energy will also be reduced.

6. Reduce, reuse, and recycle the plastic

Some species bear the status of endangered. There are many threats to name, but most of them result from human actions. When a species becomes extinct, it will somewhat cause the other species suffocate due to the diet loss. There should be a real action to conserve the endangered species to help them survive and grow back the populations. Some organizations have an authority on the marine conservation. They take care of the protected species, monitor their growth and treat their habitats.

The cruise ship has contributed in such a huge amount of marine pollution. The waste disposal, carbon emission, fuel spills, noise, and striking are the threats from the cruise ship that has haunted the marine species. When you go on a cruise trip, make sure that the cruise ship is ocean-friendly. Ocean-friendly cruise has a better treatment system, reduce the waste, hire environmental officers and staffs. Finally, the marine life will be healthier if boats and ships are going green.

9. Clean the stream and river

The water in the stream and the river will end up to the ocean eventually. If the water is clean and brings no trash, it won’t contaminate the ocean. Clean up the stream and the river regularly to prevent any waste from drifting away into the ocean. You and some people in your local area should make an agreement to schedule the cleaning. Doing it together will make the work easier, so the more people join the better.

In this modern world, make a donation becomes easier. Information about the environmental issues, the program, and how to support it can be found easily on the internet. Anyone in anywhere can get involved in the attempt of saving the nature. The simplest thing you can do to help the program is by donating to the authorized organization. The donation you give will be used to support the conservation program.

World Wildlife Fund (WWF) offers the species adoption to help the conservation of endangered species. It’s not like a pet adoption which you can bring home your favorite animals, but rather a symbolic adoption. When you adopt a species, you have helped a species to survive. By adopting a species through WWF, you will get an adoption kit including an adoption certificate, a plush, a photo and, a bag.

12. Take action on recreational use of marine

The seas and the beaches have been such attractive object of recreations. Many park and resorts are built on the beach and pull many visitors to gain high profit. The company often exclude the marine’s health in their charges. The government has to set the regulation for the company to keep the marine safe.

If you had more time, you can spend it by joining the volunteering an environmental program. You can learn a lot about how to protect the marine ecosystem and contribute to the marine life’s saving. It will be such a precious experience to work hand in hand for a better nature.

The delicious seafood isn’t delicious anymore if by eating them we would only kill the marine species. So, choose the sustainable seafood to avoid decreasing the food source for marine species.

15. Speak up about marine environmental issues

There’s a lot to talk about when it comes to environmental issues. Speak up your restlessness about how the ocean needs our help. It’s our responsibility to protect the ocean. If it’s not us, then who?

Now that you have known those 15 Ways to Protect the Marine Life, there’s no reason for not doing it. Although you think it’s not really significant to do them by yourself, it will bring such impacts if anyone will do the same.

15 Helpful Ways To Save the Dolphins