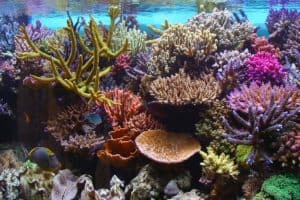 Which means, with that number ocean ecosystem will be so important for the last of living beings live. Coral reef is an important ecosystem in the ocean.

There are exist so many issues about the coral reefs that really need our concern to be fixed. The destruction issues. Destruction it self is an act of damaging something or in this case is coral reefs, until it can’t be repaired. The destruction that is being done by human has so many background. Starts from having a hobby to collect any beautiful things in the sea until the run of coral reefs or fishery business.

Without we realize, coral reef is used in many field. Such as, the use of coral reef for medicine. There are some disease that is believed can be healed by consuming the coral reef. This is why, many people looking for the coral reefs and brave to pay high for it. Besides, there are also fisherman that will just destroy the coral reef to gain more fish to catch.

This problem of destruction of coral reef causing such a domino effect toward all living beings both in the land and in the sea. Another data also stated that about 500 million of people rely on the coral reefs as a way for them to look for some amount of money to fulfill their daily needs. And by 2050, half of the world’s coral reef will extinct if we don’t do something to save it.

a. Losing job as mariner

If it will be happen in the future means, many people will lost their job and suffer during their lifetime. Because, when we can properly manage the coral reef, the people who rely on coral reef as their source of money can yield about 15 tonnes of fish and also another water animal (e.g., prawn, squid) per square kilometer per year and they will not suffer for losing their job and money. So, it will be better for us to prevent an accident happen rather than fixing an accident. It will help us more to have a better management system both for human and environment.

b. Losing Natural Resources of Marine

After the fisherman life is suffer because the coral reefs extinct, later on the travel business or travel potential in some certain places will gone as well. The tourist may come to some certain places to have a holiday. They can go for diving, surfing, fishing, swimming, seeing the beauty of the sea, and etc. When the coral reefs extinct, those kind of activities will never happen, and the tourist for sure will not go to that place anymore. It also means that the inhabitants there will also lost their money because they can’t sell any souvenirs, being a tour guide, and they can’t provide any paid facility that they used to provide before. So, the effect will not only stop in the fisherman but in only getting wider and wider.

The worst case is that, when a certain place that became a tourist destination is vanish because of the destruction of coral reef, government can’t develop the place. When the business is down because the tourist is decreasing until there will be no more tourist come, it means that there will be no income. No income mean no tax and no tax means that the government will lose one more money resource to develop the country especially that place to let the society enjoy the better facility. It is just an extreme example that might happen in the future.

Both Indonesia and Philippines are an archipelago state, and this makes both country has a big diversity of living beings. About 77% population of coral reefs in the Southeast Asia are exist in the Indonesia and Philippines. But, around 80% of the coral reefs population there are threatened. Those two country are also classified as a developing country where the people still rely on natural resources as their source of money. Which means, the people will more think about the money than the impact that may happen because of their action of destroying the coral reefs. Because as you may also see there are still exist so many fisherman and also fish market in both country who sale some endangered species of fish that should not be catch or sold.

We will can still consuming fish if the coral reefs still exist. If it isn’t then we will lost one of our food resources. There will be so many things that should be done just to save the coral reefs, but all the effort will be worth when we can make it together. Starts from the regulation that the government has made to ban some ways of fisheries until the seminar that is held for the society to make them aware of the environment surround them especially the coral reefs ecosystem. When the society finally aware that they also have a role to save the ecosystem and when they also aware no to damaging the ecosystem, earth will be a better place. By working together we can make a better and faster way to save the destruction of coral reefs.

That’s all my article for today, I hope this article inspire you to care and also take an action toward our environment especially about the case of destruction of coral reef. Thank you for keep reading this article until the end and don’t forget to keep following our website development because there will be more interesting article for you to read. Don’t forget to keep trying and saving our beloved earth starts from the deep ocean.