As of now, there are 9 dolphins under the threat of being endangered and some are close enough to go extinct. Dolphins are good indicators for knowing the quality of the waters or the overall ecology so it is important to know why some of them are in danger. So, here are the 9 species of the dolphins.

See also: Ways to Save the Dolphins

The Hector’s dolphins are listed as one of the endangered dolphins in the world. They are considered to be small and rare species of dolphins. The size of an adult Hector’s dolphin is around 1.2 metres and 1.7 metres long. Moreover, their weight can add up to 50 kg. The colour of the Hector’s dolphins is grey but they have a white underbody. Other parts of their body such as the face and the tail are black. They can live for 7 to 9 years.

Furthermore, the Hector’s dolphins are found mostly in New Zealand. It is estimated that only around 7.000 species are left in the waters. There are many reasons why they are endangered. Their habitat is disturbed due to the development of ports. They are also often killed while getting caught in a net meant for fishing. Also, chemical pollution such as pesticides are also disrupting their reproductive system. Thus, hindering the prosperity of their species. 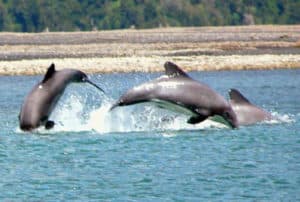 Formerly known as the black dolphin, the Chilean dolphin live in the waters of Chile. They have a grey body with black flippers but their bellies are white. Although they are grey, they turn black once they are dead.

See also: Ways to Save the Ocean

They swim in a group of 10 dolphins. A larger groups can usually consist of 50 dolphins or in higher numbers than that. Chilean dolphins do not exhibit social behaviour. So they usually try to keep a distance when they see humans. Moreover, they can also decide to swim away.

The Chilean dolphins are very small and their meats are used as bait for crabs by the local fisherman. It is now illegal but it is believed that the practice still continues which contributes to their nearly threatened status. Other than that, they are also hunted as food for humans. Since illegal fishing of this dolphin might still continue in unnoticeable ways, their species numbers are threatened. 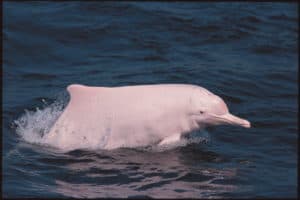 The Chinese White dolphins mostly live in the waters of Southeast Asia. They are famous for their pink whitish colour. However, they are actually black when they are born and gradually changes colour as they transcend into adulthood.

The dolphins turn grey then pinkish during their young years. When they are fully adults, they look more white in colour. The body length of an adult Chinese White dolphin can measure up to 3.5 metres. As for the weight, they can be around 230 kg. Moreover, they can live for 40 years.

These dolphins are known to be very sociable even though they usually swim in a group of four. They like to play around with the young dolphins which enables them to increase their social skills. Unfortunately these dolphins also fall under the near threatened status. It is believed that there are only 2.500 species left and that number keeps decreasing. Increasing number of pollution in the number is a serious threat to these species. Additionally, overfishing and development along the coasts also contribute to their demise. 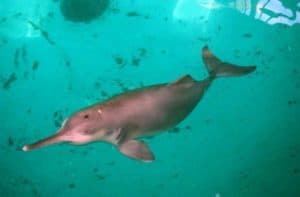 The La Plata dolphin takes the title as the world’s smallest dolphins in the world. Despite their small bodies, they have a very distinctive large and long beaks. The male can size up to 1.8 metres while the females are around 1.6 metres. They weigh around 50 kg only.

See also: Oceans in the World

Additionally, they are grey or brownish in colour. Just like the other previously mentioned dolphins, they also have white bellies. They are mostly found in the waters of South America.

These dolphins do not attract attention while swimming as they move very slowly. A dolphin will either swim by itself or join in a group. The La Plata dolphins are listed as vulnerable species. It is reported that each year, around 500 and 800 species die due to numerous reasons. The fact that they are hunted by killer whales due to their small size could be a contributing reason however, humans are more to blame.

The La Plata dolphins are often caught in nets or other fishing gears which eventually kills them. Their habitat are slowly degraded due to human factors such as pollution and industries. They poison the habitat of these dolphins and also kill off their food. 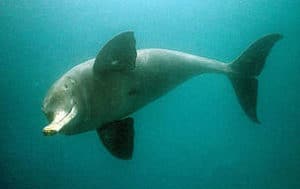 Most of the Ganges River dolphins live in the waters of the Brahmaputra Rivers. It is a river that runs through China, India and Bangladesh. The dolphins have a grey and brownish colour. The young ones have darker tones but as they grow into adulthood, they become lighter.

They have a round belly with a long snout. Also, these dolphins are often called as the blind dolphins although they are not completely blind. It is believed that evolution has made them use echolocation instead to locate their preys in the muddy water. They can grow up to 2.67 metres in size.

The Ganges River dolphins are currently in the endangered status. It is assumed that only around 1.800 species are left. The building of dams alongside the increasing pollution in water are major contributing factors to their declining numbers and habitat. Other than that, they are also still hunted for their meat and oil. 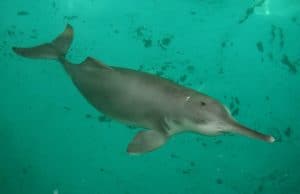 The Indus River dolphins can only be found in Pakistan. More specifically, they live in the Indus river that run through India and Pakistan. It is believed that around 50 million years ago, they used to live in the Tethys Sea. However as the sea begins to dry up, they begin to live in the rivers.They are now completely blind dolphins and survive on echolocation.

The size of these dolphins can reach up to 2.5 meters and they weigh around 110 kg.Their appearance is similar to the Ganges river dolphins. They also have a round belly and a long snout. Moreover, they are brown in colour. Their teeth are also visible even though the mouth is shut.

Also read: Differences Between the Ocean and the Sea

As of now, they are listed as endangered. Currently, there are only 1.100 species believed to exist. However, that number will keep decreasing because of factors that harm their habitat and overall life quality. These factors include pollution in the waters, hunting and entrapment in canals used for irrigation.

Pesticides, human waste or human products are constantly polluting the waters. They are also often caught in nets or trapped in canals which eventually kill them. Deforestation along the river also reduces the quality of the river which ruins the dolphins’ habitat. 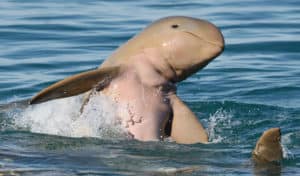 The Australian Snubfin dolphins populate the northern waters of Australia. They are relatively large with size that could reach 2.70 metres for males and 2.30 metres for females. Moreover, their average weight is around 113 kg.

For their body structure, they have no beak but they do have a round head like a melon. As for their colours, they are often grey or greyish blue with a white belly. The young Australian Snubfin dolphins are lighter in colour but gradually grow darker as they get older. These dolphins have a shy personality and only form small groups.

Unfortunately these dolphins rank as near threatened. Their habitat are at risk of being damaged because of pollution. Harmful chemicals such as herbicides and pesticides as well as industrial sewage reduce the quality of the surrounding waters. Incidental capture in nets also contribute to their depleting number of species. 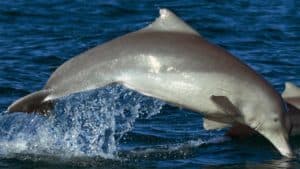 The tropical waters is the place where the Atlantic Humpback dolphins thrive. They are found in the Atlantic ocean and along the west coast of Africa. They are closely related to the Chinese White dolphin species.

The mature Atlantic Humpback dolphins are around 2.6 metres in length and weigh 139 kg on average. Furthermore, they have medium size snout and a round head. Their distinctive feature is their raised hump on their bodies. For their colour, they are grey and their bellies are lighter shades of grey. They move very slowly and swim in a small groups. Since they are very shy, they tend to avoid human contacts or boats.

Their current status is vulnerable due to many reasons. In West Africa, some people still hunt these dolphins as food. They often die or injured when accidentally caught in nets meant for other fish. Other than that, boats that accidentally collide with their bodies cause them injuries too. Another reason is the degradation of their habitat caused by contamination and also mangroves destruction. 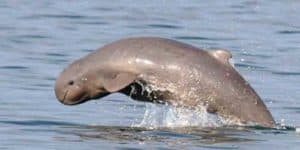 Most population of the Irrawaddy dolphins are found in the waters of Southeast Asia as well as the rivers of Bay of Bengal. These species are closely related to the killer whales. They have blunt, round head like a melon. Mature dolphins can reach 2.3 metres in size and weigh up to 200 kg. In addition, these species are not very sociable and tend to be shy. They avoid boats and swim away when there are human contacts.

These species are in the status of vulnerable due to the fact that their population keeps decreasing. Accidental fishing and degradation of habitat become threats for them. Dam buildings and deforestation majorly lower their life quality. However, the Irrawaddy dolphins are sacred animals to the people of Khmer and Lao. Efforts are being made to prevent further depletion of species.

Indeed, most of the causes of their decreasing number in species are due to human factors. There are conservations and regulations to protect them. But they are not enough because humans need to be more aware and cautious with their actions. The result could be catastrophic and the dolphins are the ones who pay for it.

Those are complete explanation about Endangered Dolphin Species in the world, especially in ocean life. After we know, i hope we can be aware about the existence of those dolphins and keep them life.