Based on the depth there are two types of ocean current which are the surface and deep ocean current. To let you know more about this I will explain it to you one by one. 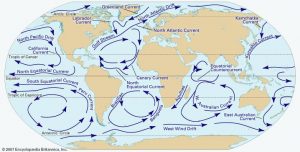 Surface means the current will only exist in the ocean water surface. This current can be affected by wind, weather condition and tides (because of gravity).

Even though the wind became one of the factor that affect the surface current but the effect is quite big. The wind can move about 400 m of the top ocean water and because of this, the wind affect the ocean current.

Because of this, the temperature in the pole is not extremely cold. Through the rotation of the water it self our climate is stay in balance because both side is always rotating and making the temperature in balance. There is one surface current that carries the biggest amount of ocean water in the North Atlantic Ocean which is The Gulf Stream. It can bring 4500 times more water compare to the amount of water in the Mississippi River. 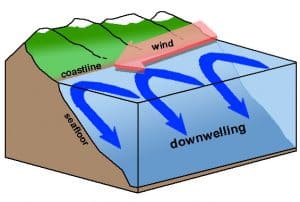 Now, moving on to another deep ocean current type of down-welling. Down-welling is a condition where the water from the ocean surface is going down. This kind of condition of down-welling can be caused by a strong wind and it results ekman transport and the Coriolis effect.

Because I am pretty sure you don’t know yet about how the wind affecting and creating the downwelling effect I would like to explain to you about the ekman transport and coriolis effect. Ekman transport is a theory that explain about the movement of water surface because of wind.

The wind cause the ocean current track shift about 45 degree to the right or left from the normal wind direction. And because of that transport, the ekman transport also creating the ekman spiral where there is a water layers exist with a different direction and speed. Besides that, the Coriolis effect is an effect caused by the wind that makes the ocean current track is shift from its normal wind direction.

Even though down-welling and surface ocean water current look alike but they are two different things. The wind that caused the surface ocean water current is not as big as the wind that caused the down-welling. Ocean current is also important for the last of many living beings. Beside it helps distribute the nutrient through the ocean evenly, it also has another function. Such as, gas cycling, conveyor belt, and etc. The existence of ocean current can occur both local and global. However both of them will have horizontal and vertical movement. Usually, the horizontal movement of ocean current is short. Taking an example of tides current, rip current, long-shore current, and etc and most of them are classified into the surface ocean current.

The ocean current is not only being affected by natural phenomena but it also can be affected by human activities. Human activities that can affect the ocean current such as throwing garbage to the sea, mining, coastal development, and etc. When human throw garbage to the ocean, the garbage such as plastic waste will polluting the ocean and it will be accumulated in the sea bottom and it will create sedimentation in the ocean’s bottom. These sedimentation will change the ocean’s bottom structure.

When the structure is changed for sure it will affect the ocean current. Taking an analogy of a hose. When you put a rock inside the hose, the water will move upward and it flows harder than before because it was looking for a hole to be passed. The condition will be different if there is no rock inside the hose, the water will flow better without the existence of the rock inside it. Through this analogy you can understand better why throwing garbage to the sea will create sedimentation and it will also changing the ocean current. 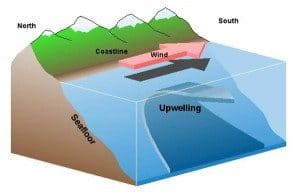 Deep ocean current means the current is beneath the ocean. We might not see it directly but it can also bring impact to us. The good impact that we can feel up to now is that the existence of fish.

That is all about today’s article of types of ocean current. Hopefully now you know more about the importance of ocean current and this will make you want to learn more about it. And also, hopefully through this article you can realize how important our role as a human inside the ecosystem. Because, no matter how small thing you have done can create a big big impact toward our ecosystem.

Both bad and good impact can we do to our ecosystem just like a simple example of throwing garbage to the ocean. It can drives our ocean current into a different track and make it does such a chaos. Anyways, thank you for reading this article until the end and also thank you for following our website. There will be more interesting article that you should not be missed! Do not forget to keep following our website!

17 Plants in The Coral Reef – Characteristics