In the land, animal can be classified into two main categories: vertebrate and invertebrate. But, in ocean most this kind of classification also occur in each of the animals whose living under the ocean. The most obvious differences that this type of animal have are the backbone. Hereby, we will give you 10 list of Marine Invertebrate animals: 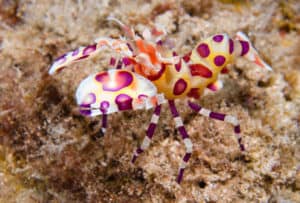 This unique marine creature has a unique name which is Hymenocera picta but in the other hand, they also call this creature as Harlequin shrimp. They are the family of Alpheoidea – Hymenocera. This cute unique creature was originally coming from East Pacific, Central/West Pacific. Their body only can grow maximum until 5 cm.

This shrimp will only eat starfish. And they also can be frozen. In the aquarium, they should be fed a couple of times a week with a small piece of starfish. They are a  good solution for controlling the Asterina starfish who in some cases will damage corals. 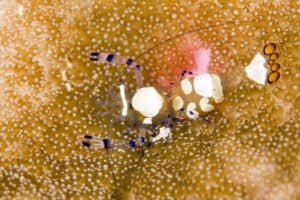 Periclimenes Brevicarpalis or also named The Glass Anemone Shrimp, Pacific Anemone Shrimp, or The White-Patched Anemone Shrimp. It is sometimes hard to see within its host anemone, this creature is the most common of all the imported anemone shrimps.

They have a transparent body has several white spots around the its carapace and tail, which helps them to blend in with the tentacles. They have five black-edged orange spots on its caudal fin. They are really suitable in the tank with anemones or sea cucumbers that can serve as a host.

The shrimp will generally stay close to the sea cucumber. It it doesn’t see any larger fish surround them, it will sometimes Venture out and forage for the foods. Otherwise, they will sahre wih the anemone. Every time the shrimp molts to grow, they have to hide from the anemone since it loses its mucus-covered shell. They also have to slowly approach the sea cucumber and cover its body with the mucus. If there are several Glass Anemone Shrimp in the tank, the males will have the white spots and become larger than the females. 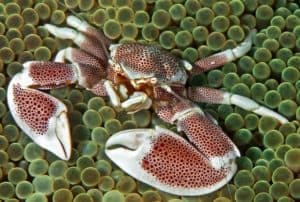 Neopetrolisthes Sp or well known as The Porcelain Crab is a stunning and beautiful smaller crab. Porcelain crabs mostly have a white body with lots of red markings and black spots. Porcelain crabs can grow maximum around 1 inch and need to be kept in tanks.

Porcelain crabs are peaceful crabs. They won’t bother other inverts, coral or fishes. This makes the Porcelain Crabs addition to most reef tanks. Porcelain Crabs spend their time in a hosting anemone that keep them safe from the larger fish and predators.

Sometimes Porcelain crabs and clown fish will fight over an anemone, and the clownfish will come out as the winner. Porcelain Crabs often do best when they are kept in a pair. This creature is carnivores. Their diet are coming from the food they found in the anemone. Porcelain crabs will eat meaty foods like the flake foods or carnivores, baby brine, and Mysis and plankton as their diet. 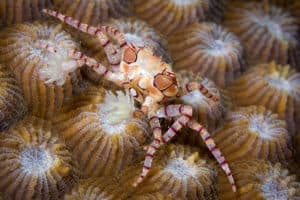 Lybia tessellata is a small crab species in the family of Xanthidae. Normally the can be found the shallow parts of the tropical Indo-Pacific Ocean. Its range extending from the Red Sea and the East African coast to Indonesia and New Guinea.

Like other members of this genus, they are commonly known as the pom-pom crab because they have a habit of carrying a sea anemone around in each of its claws these resembling pom-poms or boxing gloves. This creature may grow around 2.5 cm long.

The differences between males and females in this creature is probably the length of their tails. Females tend to have longer and larger tails because they need to carry their eggs. Most crabs are oviparious. The female will carry the eggs and they hatch it externally. 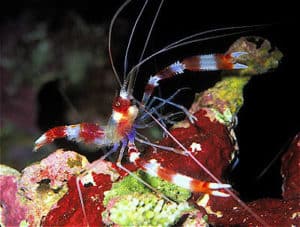 Stenopus Hispidus ia a cosmopolitan creature. They could be found in tropic waters in the Indo-Pacific Region from the Red Sea and Southern Africa to the Tuamotu, Hawai. They can also be found in the western Atlantic from Bermuda and off to the Coast of The North Carolina to the Mexico Gulf and southern Florida to the northern coast of South America.

This creature can be found in many reefs from coral ledges to rocky ledges and crevices, but sometimes found in undercut maths of rhizomes of Thalassia. Stenopus Hispidus has a red and white-banded body and claws, sometimes their bands bordered in purple. Banded coral shrimp have two pairs long, white, antennae. Their claws have the ability to automize or could say break off by natural means when they feel they are being threatened. 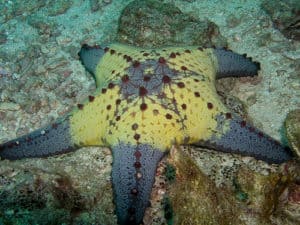 This might be one of the most frequent sea stars you ever saw in the ocean or maybe Spongebob cartoon. These sea stars are the family of Oreasteridare. These starfish are spreading all around Indo-Pacific ocean. This starfish known as Cushion Stars. This might be the most common starfish around the ocean and frequently found in the rock pools.

Their color are various, they might be orange, brown, green, blue or combinations of these color but their underside is pale pink. Normally, they have five arms some maybe four or six. They can grow around 10 centimeters in diameter and as big as an adult’s hand.

Starfish have very extremely fast regenerative power, when they get attacked and damaged their hands. They absolutely will grow new arms. Their mouth is underneath, but they prey will be absorbed into the outside of their mouths by forcing out their digestive organs from their stomach. Starfish are carnivores. Their diet will include molluscs, worms, detritus, etc. 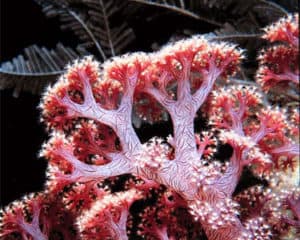 The Carnation Coral is one of the most exotic good looking soft corals in the tropical reefs. They also have many colors and color combinations. Their color is really bright like reds, purples, pinks, greens, white oranges and yellow. They have these filter feeder so their colors made without photosynthetic. This coral doesn’t have any dendrophilia corals and doesn’t have any zooxanthellae.

They will depend on the amounts of zooplankton to keep alive. To live they need the perfect water movement.This creature is aposymbiotic Nephtheids. If you never know what was that? They eat only at night, filter deeseer, and non-photosynthetic. They will catch microscopic foods particles from the water column and absorb the dissolved organic matter.

The Dendronephthya genus is the easiest species to identify in the family of Nephtheidae family because of their bright colors. But, they have a good another characteristic as well. It can grow in a fascicular fashion of bundles or clumps. 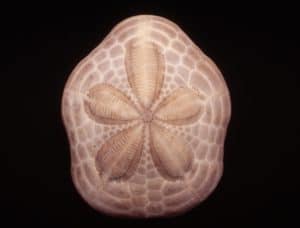 The Sand Dollar Urchin (Clypeaster australasiae) is  species that belongs to the echinoderm family Clypeasteridae. It is commonly found in Australia.

A live sand dollar normally has a hairy dark color like black purple. You can still see that outline of almost a flower on their back but underneath side of them, you don’t actually see that opening the same way. If you take a really close look, you can see that bristles are moving. Their diet is actually microscopic organisms floating on the water. This is the reason why they have fine bristles.

They’ll actually catch plankton move through their bristles towards the center which is where their mouth is?
But, for the dead one. Sometimes they are white. Sometimes they’ll be covered in seaweed. If you see the dead sand dollars, you’ll see clearly see the groove and an opening on the bottom of their body.

See also: Differences Between The Ocean and The Sea – Main Producers in ocean Ecosystem 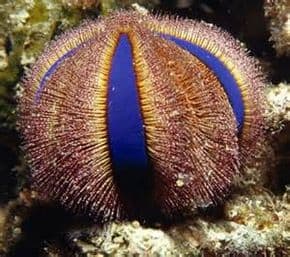 is is a small creature and regular urchin with a spherical shape, whose has a diameter around 5 cm.The spines are thin and fairly short, and not exceeding 2cm, densely arranged and ringed with black or brown color and white tip. These spines are arranged in five well-defined bands called Ambulacraires, all the quills of each band being brushed in the same direction.

These band alternate with ten other strips devoid of sparks with bright colors. But, sometimes they also greenish and almost black, and whose appearance is reminiscent of suede.  They are very similar to its parent Tripneustes Gratilla, which has longer and less brushed spine.

This Sea Urchin commonly found in the Indo-Pacific more speficially in Oceania, between the Maldives and Micronesia and from Malaysia to New Caledonia. It is found on flat and sea grass beds, between the surface and 5m depth, sometimes more. 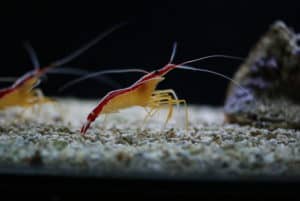 Lysmata Amboinensis is a shrimp that known as Pacific cleaner shrimp. Lysmata Amboinensis is a omnivorous species. It is considered as cleaner shrimp because they eat parasites and dead tissue from fish as the part of their diet. The species is living across the tropics. Normally living in the depths of 5-40 meters from the surface. They commonly be found in the natural part of the coral reef ecosystem.

Lysmata Amboinensis can grow until 6 centimeters with a long white antennae. A mature shrimp nromally are pale in color and have longitudinal bands over their carapace and one central white band with a wider scarlet red band on the other side. Lysmata Amboinensis have a pair a cute stalked eyes but basically they are color blind. This case makes them as a tropical fish.

Those are all types on the list of marine invertebrates which still exist in marine environment.

17 Endangered Species of the Ocean