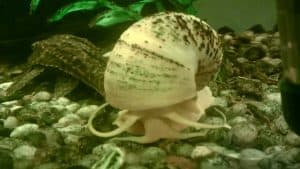 Here are 20 Facts of Water Snails. Snails can be found in all parts of the world. As they belong to the mollusk family, their bodies are soft without any presence of a backbone. Moreover, they are famous for their shells. There are snails that live on lands while there are some that live in water.

This particular article will focus on those that live in water. Water snails can live in freshwater or salt water. The ones that live in saltwater are also known as sea snails. Meanwhile, freshwater snails are a favourite for aquariums. Read on to find out what make these water snails stand out from the other species.

The freshwater snail alone does not have the ability to harm humans. However, danger arise if it comes in contact with a parasitic worm.The worm infects the snail and its eggs. The infection is called schistosomiasis. It can cause serious illness when humans bathe in the water or even drink water with nearby infected eggs.

This occurrence is common in the rivers or lakes of tropical and subtropical region of the world. The infected eggs can penetrate the skin or enter the blood vessel. Symptoms of the infection include fever, vomiting of blood or leg paralysis. Reportedly, this infection kill around 10,000 people every year in the world. It is common where the water quality is poor either because there is no attention to sanitation or dirty water. (Read: Humans Impacts on the Great Barrier Reef)

2. The Deadliest Sea Snail is the Cone Snail

Now that we know infected freshwater snail can kill humans, the saltwater snail can also harm us. But it can do it on its own. There is a specific poisonous sea snail called the Cone snail. It is able to secrete venom to other creatures by using its tooth. Once the Cone snail injects venom through its tooth, it will dispose the tooth and grow a new one.

It is said that one, single sting can cause death. However, the chances of encountering the Cone snail is low. This is due to the fact that this particular species is nocturnal. It mostly hide near rocky areas or in the sand of coral reefs in tropical region. As long as it is not provoked or threatened, it will not attack.

3. Water Snails Use Gills or Lungs

Some water snails use their gills to breathe. The gills is a very thin layer of tissues found around the body of the snail. The layer wraps the snail like an envelope. In other words, the snails breathe through their skin. The gills is used just like how fish can breathe under water. Oxygen is obtain to keep them alive. However, some snails do not have gills. They have lungs instead. Therefore, if they need oxygen, they would momentarily come up to the surface of the water to receive air. (Read also: Threats to Coral Reefs)

Although snails can’t hear, they can smell nearby food source. The lower part of their bodies have cephalic tentacles that are meant to be receptors to scent. They act as a nose. In fact, the snails are more sensitive to smells than humans. This ability helps them to locate food metres away from where they are.

Water snails have tongue named radula. It is shaped like a ribbon. There are actually many microscopic teeth in a radula of a snail. These tiny teeth help snails in consuming their food. They help the snail to break down the food into many small pieces. (Read:  Facts about Starfish)

When snails reach the age of one year old, they can begin to reproduce. The water snails must find other snails so they can produce eggs. The eggs look like blobs of jelly. A water snail can produce hundreds of eggs in one time. But, only a quarter or half of them may hatch successfully. The legs are usually laid on rocks or plants surfaces. (Read also: Causes of Coral Reef Destruction)

During moderate or extreme dry season of the summer, water level may decrease. It means that there are less water available to depend on. However, water snails have a way of coping. They will burrow into the mud of a river, lake or sea. Then they will cover themselves in mucus. That way, they can still retain water in order to survive. A water snail can live this way for three years if needed.

9. Their Shells are Unique in Shape

Most of the shells of water snails are shaped conically. They are spiral with the wide part near the main body. The shells are narrow as they grow toward the edge of a snail’s body.

10. Their Shells Can Grow

The shell of a water snail grows along with the body and age of the snail. However, a snail can increase the size of its shell especially the species found in sea water. To do this, the sea water must contain rich concentration of calcium carbonate. The calcium carbonate will help the shell to grow. (Read: Plants in the Pacific Ocean)

Due to the beauty of water snails’ shells, they are usually scavenged by humans. Most of the shells usually washed up the shores of beaches. They are used as jewellery, decorations and other purposes because of their interesting patterns and textures.

12. Buttons were Made from Sea Snail Shells

In ancient times, the shell of water snails were used as buttons. The Indus Valley Civilization are known to make use of these shells. They are carved geometrically with added holes in them. Threads are put through the holes so that they can be attached to clothing.

Water snails are lucky because their extremely hard shells discourage predators. They can also withdraw into the shells so there are less chances for the predators to come after them. Moreover, there is a compound that makes the shell have a nasty taste for the predators.

14. The Shells Protect Other Creatures Too

Shells provide protection for water snails but they are also useful for other sea creatures. For example, the hermit crabs use the shells they found by holding it on to their abdomens. The shells will protect the crabs from predators.

Many people from all over the world like to eat water snails. In France, the snails are considered as a delicacy. They are called as escargot. Different countries prepare water snails in different ways which may include frying them too. (Read: Types of Jellyfish in the Atlantic Ocean)

17. Some of Water Snails are Nocturnal

Not all of water snails are nocturnal, but some definitely are. This means that they use the day time to sleep and begin their activities only when the night falls. This can actually help the snails to avoid predators since there is less visibility.

The water snails with venoms, especially the Cone snail, are used in the development of medicine as well as the neuroscience field. They give insight to epilepsy drugs which are now in different stages of trials. They are also helpful in developing drugs for chronic pain.

Water snails have the ability to filter the water surrounding them especially the fresh water snails. They eat algae and other microorganisms that have the potential to make water turn muddy. This is a great feature for those who like to collect water snails in aquariums as they naturally help to clean the water. (Read:  Types of Ocean Storms)

Water snails are omnivorous creatures. They eat plants or algae. But they also eat other fish or sea creatures. They feed on whatever food source is the closest to them.

Finally those are Water Snails Facts. Now, we know that there are many interesting features to these small and, often times, slow moving creatures. Other than that, they provide food and greatly contribute to the medical world. Still, precautions should always be noted as they may turn deadly too.

17 Animals in The Great Barrier Reef