Endangered species exist not only in one certain place, but it exists everywhere including Atlantic Ocean. Because of man greediness, many species are hunted for human satisfaction without thinking the impact that might happen. Every species of living being has it own roles in our ecosystem, so if one species extinct our ecosystem will be hampered. If there’s no plants means there will be no herbivore, no herbivore means there will be no carnivore, which means human cannot consume both plants and animals. As simple as that little analogy, I’d like to introduce you to the 15 endangered species in Atlantic Ocean that must be contribute something in our life that needs your protection.

You may also see: 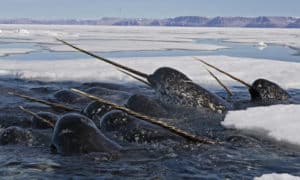 You can find this whale in Atlantic Ocean in five to ten individuals in a group up to 1.500 m depth. This species of whales could have 4.1 m in length and 1.600 kg of weight with females bigger than males. What is so interesting about narwhal is their tusk.

Their tusk is growing through out life and could reach 3.1 m in length and 10 kg of weight. There’s narwhal who has two tusk, but it is only one narwhal in 500 narwhal who has it.

Even though the females body are bigger than males, but their tusk is smaller and only 15% of females grow their tusk. They feeds on halibut, shrimps, polar, cuttlefish, pod, and squid. They could live up to 50 years. Their population is threatened by human and predation by orca and polar. Human usually hunt narwhal for their tusk, meat, skin, blubber, and organs. 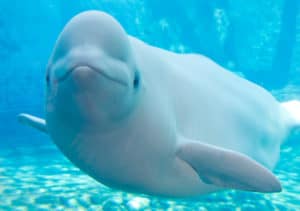 In the Atlantic Ocean you can find beluga or also known as white whales in the nortwest and northeast of Atlantic Ocean. They are a slow swimmers but they could reach 700 m depth.  Beluga’s body length could reach up to 5.5 m with 1.900 kg of weight.

They feed on pod, rose fish, shrimp, salmon, squid, snails, crabs, clams, and octopus.  Belugas are threatened by human because they are hunted for their skin, blubber, and meat. Their skin is used as leather. 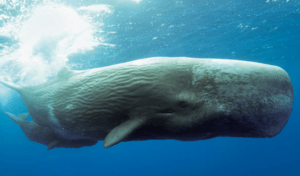 On the other hand, they feed on giant squid, colossal squid, octopus, and fish. The population of this whale is decreasing because human hunt them for their meat, skin, and sperm oil. Their teeth are also used as a carving such as scrimshaw. 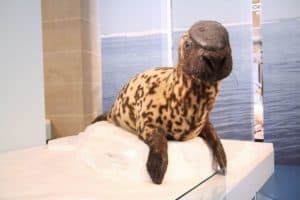 In the central and western north Atlantic Ocean only this species of seal could be found. Their length could reach up to 2.6 m with its weight up to 410 kg, with mals bigger than females. They feed on crustaceans, krill, squid, sea stars, mussels, and fish. 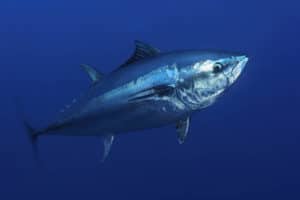 This fish is native to western and eastern Atlantic Ocean. This fish weight may exceed 450 kg. And for mature adult bluefin tuna, their length could reach up to 2.5 m.

They could live more than 15 years and their sexual maturity is late. The decreasing number of bluefin fish is because human hunt them for their meat. People in Japan often eat bluefin tuna as sushi. 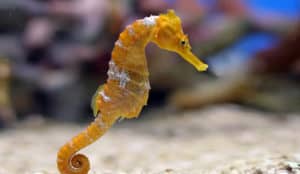 The seahorse could reach its length up to 15 cm with one to four years of life span. They mainly feed on minute crustaceans and brine shrimp. Lined seahorse also became a prey for crabs, rays, skates, seabirds, shark, tuna, and dolphins. They use camouflage tactics so the predators will be difficult to find them. 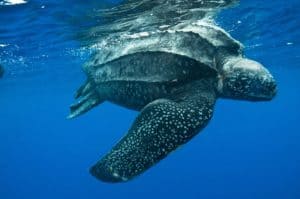 In the Atlantic Ocean the population of this sea turtles could be found in the north sea to the Cape of Hope in the south. Jellyfish are their prey and to hunt their prey leatherback sea turtle could dive deeper than 1000 m beneath the sea.

Their life span is more than 30 years. The population of this sea turtle is decreasing because of predation, and hunting by human. Besides that, the existance of plastic in the sea makes this sea turtle thinks that the plastic is jellyfish so they eat it and they die. 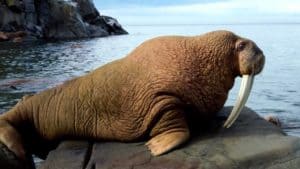 The majority of walrus basically lives in the Pacific Ocean but there is a small number of walrus in Atlantic Ocean. Walrus could dive up to 80 m depth and their weight could reach up to 2000 kg. Walrus could live up to 30 years in the wild and they reach their sexual maturity at the age of seven.

The reproduction of walrus is classified as low because they give a birth once every two years. It feeds on shrimp, crabs, tube worms, sea cucumbers, and other pinnipeds.

Walrus became the prey for killer whale and polar bear. The other factor that makes the population of walrus threatened is hunting by human. Human was hunting walrus for its meat, skin, bones, tusk, flippers, the intestines and gut linings. 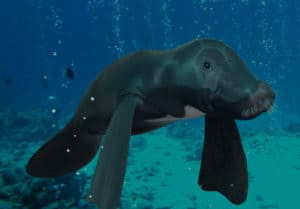 This species of manatee could be found in Brazil, Peru, Bolivia, Colombia, and Ecuador. Their body sized could reach up to 8.1 m in length and 379.5 kg in weight with males bigger than females. They feed on aquatic macrophytes, such as aroids, grasses, bladderworts, hornworts, water lilies, and particularly, water hyacinths.

In the wild, they could live up to 30 years. This species of manatee is the only species of manatee which occur exclusively in freshwater environments. Amazonian manatee is in the 15 endangered species in Atlantic Ocean list because their population is threatened by huntings, climate change, and habitat loss. 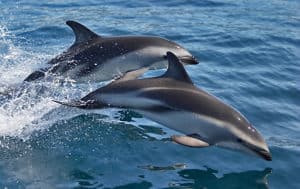 The major population of this dolphin is around South America and southwestern Africa, and New Zealand.  It feeds on fish and squid. They are also prey for killer whale and shark. Their life span could reach up to 25 years. Dusky dolphin reach its sexual maturity in the age of five with the average litter size of one. Their body size could reach up to 2.1 m in length and 120 kg in weight.

In addition, the biggest thread toward dusky dolphin are hunting and commercial fishing. They are haunted for their meat and not only a few of them are injured because of a large boat that hit them. 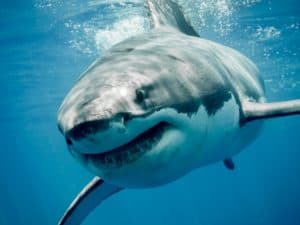 The great white shark could reach its length up to 4.9 m with 1.110 kg in weight. They feed upon fish, pinnipeds, cetaceans, sea turtle, sea otters, and sea bird. They could live up tp 70 years and reach sexual maturity at the age of 26 for males and 33 for females. 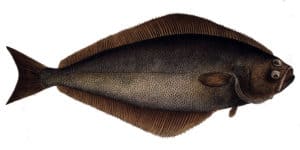 This fish is classified as demersal fish, and you can find them in the northern Atlantic with 50 m to 2000 m depth. They love to love around the sand, gravel, or clay bottoms. The reproduction of this fish is relatively slow but they could live up to 50 years.

Then, their size could reach up to 320 kg in weight and 4.7 m in length. This fish feed on another fish such as cod, haddock, herring, pogge, sand eels, and capelin. However, it willl also eat crustaceans, cephalopods, and benthos organism. The population of atlantic halibut is decreasing due to over fishing because it became an important food fish. 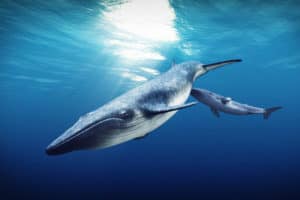 Top 2 as the second largest whale in the 15 endangered species in Atlantic Ocean is fin whale. If you want to find this whale you can go and find them in the north Atlantic Ocean. Their length could reach up to 27.3 m with 114 tonnes of weight. Fin whale feeds on crustaceans, squid, fish, and krill.

Then, just like any other whale, fin whale is threatened because of whaling up to the industrial commercial level. It was hunted for its oil, blubber, and baleen. Another factor is the collision with large fast moving ships that makes serious injured on fin whale.

In the Atlantic Ocean, you can find this species of whale in the north. Sei whale or also known as baleen whale is the third largest whale after blue whale and fin whale. Their size could reach up to 19.5 m with 900 kg of weight. Their foods are copepods, crustaceans, zooplankton, and krill. This species of whale could reach its age up to 65 years.

Meanwhile, in the North Atlantic, during the 1885 – 1984 there were 14.295 fin whales are taken. They were hunted for its meat, becauce its meat became an important food for Norwegian. Another factor that cause the death of fin whale is the endemic poisoning.

See also: Cause and Effects of Tsunami – Climate of the Ocean

Northern right whale or also known as black right whale could reach its length up to 16 m with 70 tonnes of weight. It is believed that this species of whale could live up at least 50 years to more than a century. Then, they usually breed at the age of nine or ten years, their reproduction rate is low.

They also feed on copepods, and small invertebrates. Fin whales were hunted for its oil and meat, their lack of speed through water make them easier to catch even only with hand held harpoons.

Remember that we have to always try to learn the ways to protect the marine life by start it with the ways to save the ocean. Our little help will at least avoid the ocean pollution. Thank you for keep reading this article until the end which means you do really concern about the endangered animals.

15 Endangered Animals in The Ocean