Waves in ocean are phenomena. People in general do not know what means the phenomena. We see the phenomena but we do not provide the best corrent answer. What we know about it is that firstly, we consider that waves are water motion. In fact it is energy motion. Secondly, we do not differ waves from tides, and current. Once again, we fail to understand ocean phenomena.

When tsunamis become shallow water waves, their wavelength and period are far longer. The wavelength of tsunamis is calculated by the distance of one wave crest to the other.

Moreover, what happens when tsunamis come to shallow water? If tsunamis come on beaches, they are destructive. Tsunamis energy does not change and it relatively remains constant despite the water depth decreases and their velocity decreases. Their wave crest can undergo bending when their wave motion changes to different speed.

On the other hand, when approaching ashore, the basin is lower and the velocity is constant, and it increases their wave crest. National Oceanic and Atmospheric Administration predicts the speed of a tsunami to come to shallow water slows 20 or 30 mph and becomes compressed. It grows the crest more than 100 feet. When the through of the wave hits basin it carries great debris and exposes great patches of the sea floor. This destructive cycle may repeat several times as other waves arrive causing additional damage.

Tides are also waves and the longest ones. High tides and low tides are the causes of the gravitational attraction force of the sun, the moon and the rotating earth. As the sun rising in the east and the moon coming out at night, the ocean waters will regularly rise and fall along coastlines. Moreover, different from wind-generating waves, high tides are the highest part of wave, and low tides relate to the lowest part of the tides. It can be definitely seen in shallow water.

The natural phenomenon of gravitational attraction force occurs in universe. On the moon’s surface there is something to bulge. It is occurs because the earth’s great gravitational attraction force to the moon. It is based on data of NASA’s two satellites, the Lunar Reconnaissance Orbiter (LRO) and the Gravity Recovery and Interior Laboratory (GRAIL).

However, current can interact with waves and it can be seen on some beaches throughout the world from rip current, Agulhas current and long shore current. Rip current occurs because powerful, narrow channels of fast-moving water along coastline. It relates to weather, tides, beach shape and waves break offshore. Rip occurs along coastline throughout the world. In the US it occurs in the East, Gulf, and West coasts and the Great Lakes.

Moreover, Agulhas current just occurs in one place, i.e. Cape Agulhas located in the west of Cape Town, South Africa. As arriving in Cape Agulhas, the current speed becomes strong enough. It cannot hold the continental shelf and reverses direction and begins heading back to the northeast. The current speed can reach around 5 knots. Agulhas current is totally the only cause of current. Agulhas current aids the transfer of warm and saltier ocean water from Indian ocean to South Atlantic through Mozambique Channel. It also aids in re-circulation of Agulhas current and feeds Benguela Current in the South Atlantic and Antarctic Circumpolar Current. 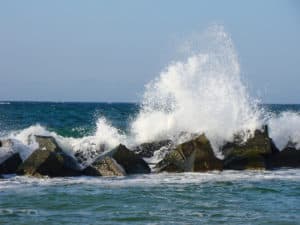 At least three factors can be used to classify waves. These include period, and the opposite forces (the restoring force and disturbance force). At first, we discuss the classification of waves by period. It means the time required by successive wave crests to pass a fixed point.

See also: Climate of the Ocean – Global Warming in Ocean

Functions of Waves in Ocean

At least there are six functions of waves in ocean. Firstly, waves create beaches throughout the world. If there is no wave, there is no beach. Waves bring up sand from ocean floor. Instead, they wash the sand and clean it. Secondly, the waves pound and erode rocks. The process creates a symbiotic relationship between sea organism and nature. The sea organisms make adaptation to the erosion of the rocks. Thirdly, the waves increase the capability of sea organism and creatures to make adaptation.

Waves breaks onto the coast and sea creatures and organism take the hardest hits and they have to adapt to be strong. Fourthly, the waves increase biodiversity in ocean. Some sea organism use waves, tidal and current to spread their larvae throughout the sea. Fifthly, at the surface, exchange of climate gases occur. At the surface, the exchange of oxygen and carbon dioxide occurs when ripples and waves gases. Sixth, the waves stabilize climate temperatures. Together with current, waves moves warmer and cold water, and similarity of temperature throughout the world occurs.

Finally, waves are important. It has the relationship of universe, gravitation and regional factors. Wind-generating waves, tides, tsunamis and current are part of the water motion. These exchange heat, energy, gas and others between oceans and atmosphere. Moreover, human activities get advantages from the water motion, such as recreation, shipping, coastal management and coastal and offshore industry. However, once again our knowledge on waves is relatively minimal.