A term named surface tension could be a special term that we hear rarely. However, it is really exist and useful in our everyday life. Insects walking on water, floating objects, and beading water are just a few examples of surface tension phenomena.

After knowing those phenomena, we are certainly curious with the meaning of surface tension itself. We also want to know how surface tension forms and its existence in our life. Below, we will get a further knowledge about surface tension.

The surface layer between the water and air takes an inward concave shape. As explained before, this happens because a stronger adhesion force between water and the tube than inter-molecular cohesion forces in water. Water wets the tube since it has a tendency to spread towards the greatest surface possible.

1. Helps Insects to Walk on Water 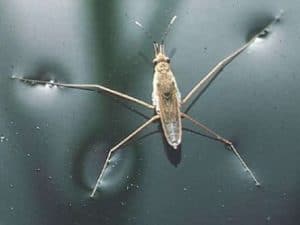 As we already knew, surface tension seems like causing the occurrence of skin effect on water surface.

The surface of water behaves as though it is discovered with an invisible skin. This invisible skin helps several kinds of light-weight insects to walk across it.

Water stride is one of several insects which have ability to walk on water. This insect has hairy legs which are hydrophobic; it resists the contact with water.

The combination between the surface tension of water and the hydrophobic legs of water stride helps water stride to walk on water surface.

If we look closely when a water stride is crossing on water, this insect seems like skating on water, due to the combination of surface tension and hydrophobic legs.

In the ease of walking across water, water strides are at risk of being disappeared from Earth. Why does this thing happen? As we know, we use many kinds of chemical thing in our everyday life, such as detergent and soap. Detergent and soap are similar chemically, except for the oil in them. Many soaps use natural fats while detergents use refined petroleum.

The similarity between soap and detergent is the same kind of molecules inside them. The molecules of soap and detergent have two ends which act as a bridge between water molecules and grease molecules. This allows the soap or detergent to grab onto the grease from a dirty dish and use the other end of the detergent molecule to latch on to water to be washed away.

The ability of detergent and soap to wash dish and clothes are useful for us. However, the molecules in soap and detergent able to break the surface of water. The end of the detergent molecule which attaches the grease cause water molecules broken.

After all of the explanation previously, why water striders are mentioned to be at risk? The problem is when we dump the detergent and soap waste to the source of water, such as river or beach. These waste will be resulting on the decreasing of water surface tension.

The molecules inside the waste will disturb and break the molecules of river or sea water. If this happens continuously, small animals like water striders will lose their way to survive. 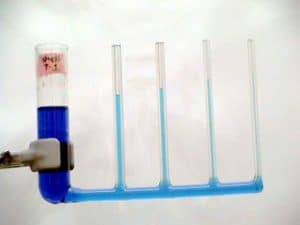 This capillary action is due to cohesive and adhesive forces where water molecules are attracted and stick to other substances such as glass or paper.

Adhesion of water to the surface of a material will cause an upward force on the liquid.

The surface tension acts to hold the surface intact. Capillary action occurs when the adhesion to the surface material is stronger than the cohesive forces between the water molecules.

The height to which capillary action will take water is limited by surface tension and gravity.

It could be difficult to understand capillary action without an experiment. We can use a small capillary tube which is open at the top and the bottom. In this type of capillary tube, water will start to rise up.

This happens because water molecules attracts to other substances, in this case is the straw. The surface tension will push the water up, until the force of gravity prevents further rise.

Capillarity is the result of cohesion of water molecules and adhesion of those molecules to a solid material.

In the case of a glass tube inserted in water with openings at both ends. As the edges of the tube are brought closer together, such as in a very narrow tube, the liquid will be drawn upward in the tube.

The more narrow the tube, the greater the rise of the liquid. Greater surface tension and increased ratio of adhesion to cohesion also result in greater rise.

After we get the understanding about capillary action as one of several effect of surface tension, we also need to know how it exists in our everyday life. Capillary action comes in many forms in our life. Below, there are two example of capillary action phenomena. 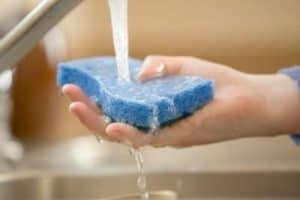 When we talk about the function of sponges and how this thing can absorb water, we also need to know about surface tension.  The nooks, crannies, and holes of sponges have their own function.

Those three features support the function of sponge to absorb water. The inner structure of a sponge leads to the increased surface tension.

This increased surface tension will be brought in moisture and causes molecules to cling to the surface of the sponge.  The ability of how strong a sponge can hold water is depends on the structure of sponges.

Besides, the materials used in the making of sponges also contributes to its ability. Generally, if there are more holes on a sponge and more surface area, the more a sponge can hold water. Certain sponge materials can develop this sense, but for most sponges this will be the main idea.

When dry, these holes are larger and more rigid, but as the block begins to saturate, the holes will shrink as the rest of the sponge swells. Dry sponges absorb water quickly, but there will be more water escapes, due to the big holes.

Contrast to dry sponges, wet sponges which have smaller holes will soak up more water. As the holes shrink, the water has a more difficult time leaving due to narrowed passageways, but it will also begin sticking to the other water molecules as well.

The holes of a sponge act as absorption points as well as storage areas, and when water begins to enter, it will both cling to the vast surface area as well as absorb into the material.

Beside the material of sponges, the thermal energy of water molecules help the process of capillary action. In this case, chemical bonds control the contact between water and a solid surface. It is observed in the contact angle that the water or air surface makes with the solid surface. This angle depends on the strength of the bonds between the solid and the water molecules.

You can see this when you pour water in a glass; the water at the edge of the glass is a bit higher than in the center; it makes an angle with the glass surface.

Now, if there is a lot of solid around the water, such as water in a tiny tube, there are a lot of contact points. Therefore, the water or air interface will be strongly curved. The curvature of this interface modifies the surface tension, which represents the energy contained in that surface.

A good way to interpret the effect of curvature is that you surround a given portion of the interface by more or less water molecules as you curve the interface. The pressure on the interface is thus reduced or increased depending on the curvature.

See also: Climate of the Ocean

4. Supports Plants to Absorb Nutrition and Water from Soil 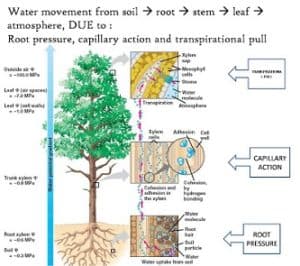 In plants, capillary action acts to bring water and nutrition from soil to the roots and stems to the rest of the plants.

In this case, the capillary action happens because the attraction of water molecules in soils with the molecules inside the stem.

This attraction is used to help force the water up from the ground and disperse throughout the plant. There are 3 forces that we already knew that makes the capillary action in plants happen.

The first one is adhesive force, which means the process of attaching one thing to another. Adhesion in plants allows for the water to stick to the organic tissues of plants.

The second one, named cohesive force, keeps molecules of the same substances together. Cohesion keeps the water molecules together. The last one is surface tension which means the effect of intermolecular attraction that causes liquids to form a top or outer layer. Surface tension is responsible for the shape of water drops and for holding the structures together as plants soak up the water.

5. Make the Round Shape of Bubbles 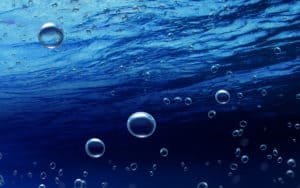 An attractive force named surface tension also causes other effect, which is responsible to the round shape of bubbles.

In addition, sphere or round shape is the tightest possible groupings that any collection of particles can achieve to pack together. A sphere has the smallest amount of outside area among other shapes.

When we release bubbles from bubble pipe or any other thing, surface tension makes a thin layer of soapy water assume the smallest surface area that it can form.

The result comes in the form of sphere. If we do not fill some air within bubbles intentionally, the soapy water would continue to shrink down to a solid spherical droplet, just as rain drops.

However, the air inside bubbles are pushing outward against the water film. All gases exert a pressure on their captors because they consist of freely flying molecules that are banging up against anything in their way.

In a bubble, the inward surface-tension forces of the water film are exactly balanced by the outward-pushing pressure of the air inside.  If they were any different, the bubble would either shrink or expand until they were equal.

If we blow more air to make a bigger bubble, that will make more air pressure inside. All that the water film can do to counterbalance the increased outward pressure is to expand its surface, making more inward-directed surface-tension forces. So it very cooperatively grows in size.

However, it must get thinner in the process, because there is only so much water to go around. If we keep blowing more air in, the film eventually won’t have enough reserve water to spread out into a bigger surface, and the ultimate catastrophe that will occur is the burst of bubbles.

That’s all about the definition and the examples of surface tension liquids, especially water, in our life. Hope this article helps you, our readers, to understand about surface tension easily.