9 Types of Jellyfish in The Atlantic Ocean

Most of you may know this species because of its sting. They mostly have their tentacles and with their tentacles, they hide their venom to sting human or to kill their prey. Jellyfish is an umbrella shaped with a soft bodied ocean animal. They live over million years in every type of ocean. They live since dinosaurs era. You may see them on the discovery channel or in the ocean while you are diving. But, did you know that in the Atlantic ocean, they have a very beautiful shaped or jellyfish? Hereby, we will present you the types of jellyfish in the Atlantic ocean.

The Sea Nettles are normally can be found on the coasts of North America. You can mostly find them in the Coastal waters of California and Oregon. You may also see them in the north to the Gulf of Alaska, west to Japan and South to the Baja Peninsula. But, they won’t appear as much like in the North America.Sea Nettles can grow until 30cm across. They have 24 tentacles which can grow 2m long with their famous sting. Their sting can be crazily painful and leave a painful rash on the skin in more than

an hour. For their diet, they normally eat various of zooplankton, including the tiny crustaceans, comb jellies, small fishes, fish eggs and larvae, and also other jellies.

Read : Conservation of the Great Barrier Reef – Animals in the Ocean Biome 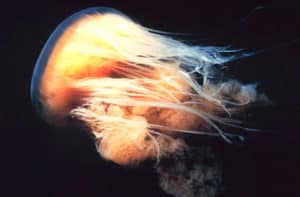 This is one of the largest jellyfish in the world. This species mostly purple or red. Meanwhile, the smallest would be orange. When they grow their size is as big as the Blue Whale, the largest animal in the world. Lion Mane Jellyfish mainly lives in Arctic or North Pacific from Alaska to Washington, Atlantic Ocean, and North Sea region where the waters are cool.

Their tentacles can grow up to 190 feet long and their bell diameter can be up to 7 feet wide. People called it ‘mane’ because of its long and tentacles which are similar to people’s hair. Each of tentacles equipped with nematocysts that contain dangerous poison. With this dangerous poison, they will sting and catches small fishes, tiny crustaceans, and other jellyfishes as their diet. 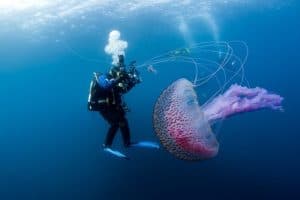 Pelagia adults have separate sexes. They reproduce sexually by releasing gametes from gonads that they have near the center of the body. They will fertilize externally through the mouth of the jellyfish. Currently, this type of jellyfish isn’t in danger. They can keep populating in the Mediterranean. 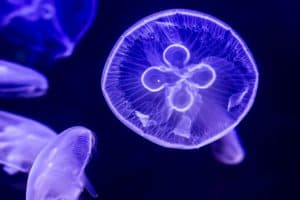 The main prey for Sea turtles, tuna, sunfish, butterfish and spiny dogfish. Moon Jellyfish has been the main diet for sea turtle. This species is unique but also cringe. They have a fringe around the tentacles around the bells, four arms near the center of the bell, and 4 flower-shaped reproductive organs (people called it gonads) which can be orange, pink or red. This species can grow a bell until 15 inches in diameter.

This cringe jellies can be found in tropical and Florida beaches. They may be found in the open ocean or coastal waters.Mainly, they only eat zooplankton, medusae, plankton, and mollusks by their tentacles. This type of jellies also not dangerous and harmful to people. 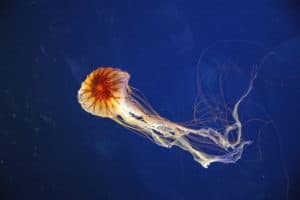 Compass Jelly or in Latin name known as Chrysaorahysoscella is a very common jellyfish that normally lives in Atlantic or Mediterranean, including near the United Kingdom, Ireland, and Turkey. This species also normally can be found in the southern part of Atlantic Ocean from the west coast of South Africa and False Bay.

They normally have around 30cm diameter or more. And they also have 24 tentacles that connected and arranged 8 groups of 3. Their color normally yellow white with some brown marks. They also usually have 15 markings on the bell that resemble elongated v’s nearby the central brown spot. Their mouth is at the bottom center of the bell. Between 4 larger tentacles. Be careful with them because their sting can badly hurt you. 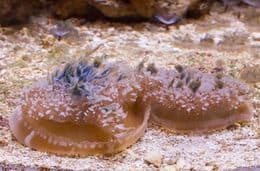 Cassiopeia Andromeda or usually called by The Upside-Down jellyfish is a large jellyfish that can grow up to 30cm in diameter. Their color are brown or olive with creamy white in color. Their underside is covered by some oral arms that branch into thousands of lappets.

On the other hand, the reason why this jellyfish called as upside down because they don’t spend much time to swim but instead flipping upside down, pulsating, on sandy or muddy substrates in mangrove or soft bottom bay habitats.

They have a mild sting since they do photosynthetic, but for sensitive people may effect in a different way. The photosynthesis happens because most of the corals they host zooxanthellae within this jellyfish. 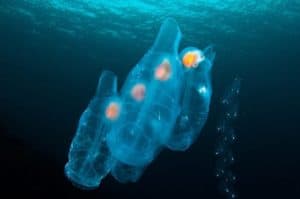 This vagina Apparently gonna be the weirdest name for jellyfish ever. According to the Scripps Institute of Oceanography, this jellyfish is the largest species of salp that lives along the West Coast of US. This jellyfish may live in Atlantic and Indian ocean with typically around 100m from the surface.

They have a unique barrel shaped, mostly clear, and have a defined body form. They mostly eat phytoplankton, including single organisms, such as silicoflagellates, diatoms, and tintinnids. Thetys Vagina can grow around 30cm long.

According to the history, T. Vagina gets its name from the German naturalist Wilhelm Gottlieb Tilesius von Tulenau who is famous for accompanied the first Russian circumnavigation of the globe around 1803-1806. 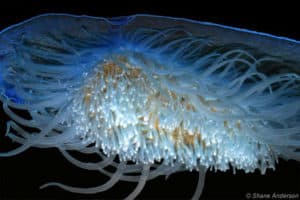 This kind of jellyfish mainly found in Florida beaches. Weird but do not underestimate what they can do to harm the human. When you have an accident contact with the venom, you may have irritation of the skin and eyes. So, be careful!

They normally have dark blue as their characteristic color. They can grow around 7 cm long. Well, pretty small. Their main feature is a small stiff that able to catch the wind and propels them over the surface.

Velella velella lives in warm waters and spread in all world’s ocean. They live with free floating on the surface of the open ocean. Velella velella are carnivorous. They will mainly eat plankton and catch them by their tentacles. Their tentacles are the thing that hangs down in the water. Their toxins in their nematocysts are very effective to catch their prey. 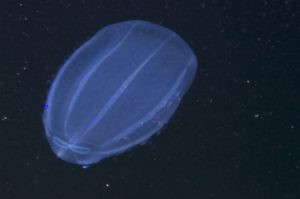 Beroe Cucumis is species of comb jelly from the family of Beroidae. Their body is sac-transparent that can grow to 15 cm or 6 inches. Their body has eight longitudinal rows of cilia that extend from the aboral end.

They are mostly found in the North Atlantic Ocean and the North Sea, including the Skagerrak and the Kattegat. Sometimes you may see them in the Mediterranean sea. They are a pelagic, like an open water species and nobody knows how deep they can swim. They are also a predator. They mostly will eat other comb jellies species. They will eat them alive. Pull them into their mouth and eat the whole body directly.

Finally, here all information about how many types of Jellyfish which exist in marine life. I wish after we know about them, We can increase our knowledge then protect them for not being labeled as one of endangered animals in the ocean.

10 Endangered Plants in the Ocean