Home » Conservation » 15 Helpful Ways To Save the Dolphins

15 Helpful Ways To Save the Dolphins 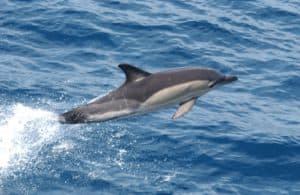 Dolphins are highly intelligent marine mammals. They are part of the family of toothed whales that includes orcas and pilot whales. They mostly inhabit worldwide in shallow seas of the continental shelves. Dolphins are carnivores which mostly eat fish and squid. Dolphins vary in colors, but they are typically gray with darker backs than the rest of their bodies.

There’s no denying that dolphins are one of the most iconic species of the marine world. With their playful nature and high intelligence, dolphins have stolen the hearts of people of all ages from all over the world.

According to their popularity, many countries are researching and monitoring dolphins to ensure their survival. In April 2009, biologists working in Bangladesh found a thriving population of 6,000 Irrawaddy dolphins, which they thought to be critically endangered, off the coast as part of a monitoring project started in 2004.

Nowadays, dolphins all around the world face a variety of impacts that threaten their existence. Ironically, dolphin threats are mainly a result of human activities. Construction of dams and boat traffic, entanglement in fishing gear, pollution of the environment, climate change, and commercial harvest are those threats that have been haunting them to death.

There are plenty ways you can do to save the dolphins whether by taking a real action toward or by reducing the possibility of increasing the ocean damages. These are 15 Ways to Save the Dolphins you need to know to help the efforts on protecting the dolphins as well as the other marine species.

Bottlenose dolphins inhabit tropical and temperate oceans worldwide. They live in groups of about a dozen individuals. They learn at an early age the complex socialization skills that will prepare them for future survival. Surviving on fish, dolphins work cooperatively to herd and corral their prey to the surface for easier feeding. Dolphins are susceptible to toxins, pollution, and entanglement in fishing gear. Due to the rapidly rising ocean temperatures, the dolphin’s primary food sources are searching deeper cooler waters. Scientists are concerned that the dolphins will have difficulty adapting as quickly as necessary to find new feeding grounds to sustain their populations.

What you can do to save the dolphins is by adopting them through World Wildlife Fund (WWF). It’s not that you can take a dolphin home, but rather it’s a symbolic adoption where you can help save real animals in the wild. By adopting a dolphin you will get an adoption kit including adoption certificate, photos, plush, etc.

2. Try to use phosphate-free laundry and dish soaps

Laundry is one of the main things we do to keep our hygiene. Washing our clothes and our stuff regularly will keep us clean healthy. To do the cleaning, we need detergent to wash the dirt perfectly. Most of the detergents in the market contain phosphate. Phosphate detergents help suspend dirt in water and reduce lead dust. Although phosphate detergents make the cleaning more effective, it can harm the water ecosystem due to its poisonous effects.

Then, the detergents ingredients destroy external mucus layers that protect the fish from bacteria and parasites. It can also cause severe damage to the gills. Phosphates in detergents can lead to freshwater algal blooms that produce toxins and decrease oxygen in waterways. So, start choosing the detergent that is phosphate-free to save the water from the toxic contaminant.

3. Use fewer harmful chemicals and pollutants, and dispose of them properly

Chemical waste from home and industries ends up in the ocean. This causes the water pollution that can harm the marine species. The chemical pollution has been one of the main causes of the species extinction. Dispose of the waste properly to avoid the contamination.

There are some ways to dispose of waste properly, but the easiest and most acceptable one is digging a cathole. You can make a cathole by yourself by digging a hole 15-20 cm deep and 10-15 cm in diameter. After you finish digging the hole, cover it with natural materials to hide it in disguise. The cathole will disperse the waste rather than concentrate it (which enhances decomposition). By doing this, you will help prevent the water contamination and save the marine species including the dolphins.

4. Don’t pay to swim with the dolphins

Sometimes, dolphins are illegally caught and sold to parks around the world. Dolphins are separated from their families in the wild—even babies, who typically stay with their mothers for three to six years. In the wild, dolphins swim up to 40 miles each day.

However in captivity, they’re confined to chemically treated concrete pools. This brings a traumatic effect on them since they communicate through sonar. Because of the captivity, many dolphins develop painful conditions, such as stomach ulcers. Some die prematurely from the stressful conditions of captivity. Swim with them will pass the illness from the dolphins to human visitors. So, if you love the dolphins, don’t pay to swim with them.

Marine environmental issue has become a serious issue. People seem to care less about this issue since marine problems haven’t brought any direct harms to human. This issue has only threatened the marine species like dolphins. To improve people’s awareness about marine environmental issues, you can take a part in the group who runs in the efforts to overcome the issues. You can speak up and be a powerful advocate for wildlife.

6. Write your legislators when you have an opinion about pending legislation on environmental, land use and other issues

The legislators are responsible for the law-making including the environmental issues like the dolphin’s life. They represent the voice of the citizens. You have the right to deliver your opinion. Express your concern about the environmental policy that can give a betterment to the marine life including the dolphins. A simple way you can do is visiting the Wildlife Action Center to send a message to government leaders.

7. Use Seafood Watch to choose seafood that’s good for you, and good for the oceans

Nowadays, everyone has a smartphone to hand everywhere with. The use of the smartphone has helped people in every way. There is an application that can help people to get recommendations for ocean-friendly seafood at your favorite restaurants and stores. This application will help the attempt to avoid the depletion of endangered fish species which are the food source for dolphins and any other mammals.

8. Don’t use electrical appliances for things you can easily do by hand

There’s no doubt that technology has made our lives better. Some activities become easier with the help of electronics. But we can’t deny that the use of electronic needs electricity that actually isn’t safe for the environment. For things you can still do it easily by hand, you shouldn’t use the help from electrical appliances. Anyway, saving energy from any source can save more than we think it can.

When you’re going shopping, bring your reusable grocery tote bag. If you must buy disposables package, buy paper products rather than plastic or Styrofoam. The manufacture of Styrofoam destructs the ozone layer. Try to recycle the plastic rather than dump it. If you don’t feel like recycling it on your own, just collect them and supply it to the agency that’s responsible for it.

Some fish species have become endangered over these past decades, including tuna. Start to avoid eating tuna, especially Bluefin Tuna. Since the dolphins are eating tuna too, it means that you have a contribution in depleting the dolphins’ diet source. Rather than eating the endangered tuna, choose the ‘dolphin-safe’ products which have a label on their packages.

By attending the marine park or any places that hold the Dolphin show, it means that you support the efforts to captivate and torture them for commercial purpose. You let the company keep on doing their work on captivating and taking advantages of the dolphins which belong to natural habitat, that is the ocean.

12. Volunteer your time to conservation projects.

If there’s any conservation project in your area, it will be great for you to volunteer. You can participate in stream and beach cleaning programs. To be sure, cleaning the stream and beach can help reduce the trash that contaminates the ocean where dolphins live.

Using the water wisely can actually help many things. Start to conserve the water in your house by reducing the water you waste in the shower, turning off the tap while you’re brushing your teeth and washing your hands, and fixing the leaks in your plumbing system.

14. Donate to the dolphins conservation group

Share some of your money to the conservation group who is responsible for the dolphins. The money you give will be used to support the attempt to monitor the dolphins’ conservation. You can donate for once, monthly, or renew your membership.

15. Become a Defender of Wildlife

To become a defender of Wildlife, you can join the membership. Your defender’s membership includes the quarterly publication with fascinating articles and stunning photos of wild animals in their natural habitats.

Those are 15 Ways to Save the Dolphins you need to know and do. Start doing the simplest one and try to do the real action for good. Whether we realize it or not, marine damages are crucial for living organism on the Earth. Maybe the effects haven’t hit us yet, but sooner or later it will torture any lives. Also, protecting the dolphins and the marine’s life are our responsibility as human.