Overfishing in the Ocean – Causes – Efforts 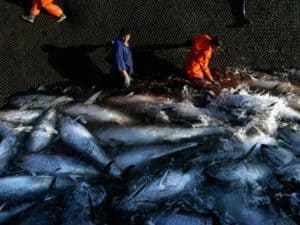 It seems like the idiom of ‘There’s a plenty of fish in the water’ should only be in the literature. Keeping in mind that the fish in the water won’t lose their number no matter how much we catch them is a complete failure. The truth is, the fish stock in the ocean is only decreasing. Humans have a big responsibility for this. Fishing is the main way to fulfill the human needs in food and also for the recreational purpose.

Fish has been an important source of food for people. Most fish are good sources of dietary protein. Protein is necessary for every part of the body, like skin, hair, nails, heart, lungs as well as muscles. Protein is a fundamental nutrient for healthy development. They are also supplying essential minerals and heart-healthy omega-3 fatty acids. All the research reveals that fish is a rich source of many of the nutrients that young bodies need. Fish plays an important role in helping to prevent many of the diseases of later life.

The high intensity of fishing activity due to the global demand for fish has caused overfishing. Overfishing has been threatening the life underwater. There are more endangered fish caught than the effort to replace the populations. The rapid growth in demand for fish and fish products is driving the fish prices to increases faster than prices of meat. As a result, fisheries investments have become more promising to both entrepreneurs and governments. It’s completely detrimental for small-scale fishing and local fishing communities all over the world.

Overfishing is simply a situation where humans catch too much fish from the oceans or the other water bodies in such enormous amount and fast pace than nature can naturally recover. In other words, it is when humans take out more fish than the fish can naturally replace. This promotes to a degradation of the oceans, making it a non-sustainable use of the world’s oceans.

Overfishing plays a role in over-exploitation where the fish stocks number are dropping below the acceptable levels. The significance of the problem of overfishing is often neglected and leads to deforestation, desertification, energy resource exploitation and other biodiversity depletion dilemmas. Food and Agriculture Organization (FAO) estimates that over 70% of the world’s fish species are either fully exploited or depleted.

There are some reasons to mention behind the overfishing:

High demand for fish for economic needs have pulled up the fishing efforts to a higher place. Many modern boats seek opportunities through high capability of catching more fish in an easier way. The root of the problem is there are too many boats chasing too few fish. The more fish these boats take out, the fewer fish there are that can reproduce their offsprings. The further consequence is there are more fishers must turn to stronger tools to find them.

Fisheries rules and regulations are not assertive enough to limit fishing capacity to a sustainable level. This is particularly the case when it comes to the territorial waters, where there are few international fishing regulations. There is no promising guarantee that the fish entering the importer’s country and shops are caught legally and in a sustainable way. Many fisheries management bodies do not pay attention to scientific advice on fish quotas. They even set catch limits above the recommended maximum amount.

Illegal fishing practiced by the irresponsible fishers make the fishing efforts become uncontrollable. They don’t respect the fishing laws or agreements just to gain more profit. The pirate fishers sell many endangered fish at high prices without considering the future impact for the marine life.

Overfishing has drained out the fish stocks into a critical level. In the last decade, in the north Atlantic region, commercial fish populations of cod, hake, haddock, and flounder have dropped as much as 95%, provoking calls for urgent measures. Some are even suggesting zero catches to allow for regeneration of stocks, much to the ire of the fishing industry.

Alongside with the depletion number of the fish, overfishing has caused many problems to the marine life. These are some impacts from the overfishing:

Unsustainable fishing is the greatest threat to ocean ecosystems. The fishing practice from the irresponsible parties destroy the physical environments of marine life and accelerate the extinction of the species. When a species becomes extinct, it will break the food chain in the oceans. Since unsustainable fishing for tuna species has been in a huge number, the sharks which feed on tuna will run out of food and start eating small fish that is actually the mackerel’s food. There can be an unhealthy competition for food.

The majority of all plant and animal life on earth exists in the oceanic ecosystems. The oceanic ecosystems are occupied with a massive amount and diversity of life from the smallest krill to the Blue Whale, the largest mammal. The diversity makes the marine life amazing and balanced with millions of fish species and other marine animals. Constantly fishing for certain species, like the blue-fine tuna, means soon that kind of fish will be extinct.

A new study conducted by the International Union for Conservation of Nature (IUCN) discovered that 5 out of the 8 tuna species are at risk of extinction. All three species of bluefin tuna are threatened with extinction. They are in a population that makes their recovery practically irreversible.

Another impact that is hard to deny from the illegal practice of fishing is the marine pollution. Oil and liquid spills, chemical, and solid elements leaked into the water by fishing boats, vessels and trawlers often hurt marine life. It is not hard to think that the oceans are so big and these won’t bring bad influences, but a bit of pollution by thousands of trawlers every day contribute to something huge and disturbing. Water pollution can’t be a simple problem cause it has very devastating consequences.

Wherever there is fishing, there is bycatch. Bycatch occurs because the modern fishing gear is very strong and powerful. They often cover an extensive area and can be highly unselective. This means the fishing gear catches not only the target species but also many other creatures like dolphins, whales, sharks, sea turtle, as well as the juveniles.

Many large fisheries stay for weeks and months in deep seas. They sometimes loose their nets to trap and catch fishes under the water. These discarded nets stay there for many decades and give more chance to kill more species. The destruction they cause is fairly significant since the practice is out of control.

Sustainable fishing ensures that people’s livelihoods are protected and the fishing business is sustained for the longer term. Overfishing does not guarantee that. Soon, big investments will go waste and people will be out of work.

For many years, there have been many efforts to manage the uncontrollable fishing practice and stop the overfishing, but many of them have not worked well. These are a few of what has been running in many fishing regions of the world:

Those are some things you need to know about Overfishing in the Ocean. Many people still have no idea of overfishing. Protecting the ocean is everyone’s responsibility and it’s important to educate others about the overfishing issue. To be sure, learning about it is the greatest start to solve the problem. You can join to help the problem solving by joining the organization, movements, and discussions about the issue. We can lower our demand for fish, and supplement with other protein sources, so there will be a lower demand for the fisheries.