In this century, we know that sea level rise has been one of the most topics discussed over the world. There are so many studies and conferences which are talking and discuss the solution to decrease the rising of sea level. News portals around the world are also generally updating the information of sea level development. Then, what is sea level rise meaning actually?

After we remember the meaning of global warming, we got the point that it is all about a very quick heating. There are two well-known actions that we certainly know, which causes the heating. Those acts are green-house effect and pollution caused by often vehicle use. The effect of these two acts will result on dangerous gasses, which later collect with carbon dioxide (CO2), and then increasing the Earth’s surface temperature.

[box title=”” align=”center Take a glass, fill it with just a bit water, then add some ice cubes too. Place it outside, maybe around yard. Little by little, the ice cube melts, and the amount of the water we add before, is increasing too. The ice cube keeps melting until it disappeared, and in the end the amount of the water is in higher quantity than before. That is a very simple experiment which proofed that the increasing of Earth’s temperature results on rapid ice-melting process. [/box]

The example before shows that high level of temperature caused a quick ice-melting. Now try to imagine the huge chunks of ice in polar ice caps with global warming we encounter these days. The huge ice chunks will also produce a very big amount of water. Normal ice-melting amount in past centuries have generated water disasters sometimes. What kind of massive disaster will we experience if rapid ice-melting in our century keeps continue? No need to mention, we will lose our island one by one. 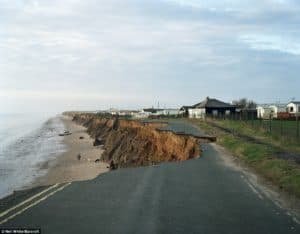 Erosion is an act where the surface on Earth goes worn away caused by water, wind, and ice.

In this case, water is the catalyst why the erosion happened.

The water, the movement of sea water exactly, makes soil and rocks moved from one place to another.

The more increasing of sea water, the more soil and rock movements will continue. It will change the shape of coastal place into more less space.

The sea water movement, which is the waves, crash against the beach area regularly and decrease the beach are into smaller space. This erosion, become more a serious dangerous erosion by human worse activities.

What we discussed now is something well-known as reclamation. Reclamation could have good outcomes, such as establishing more area for working spaces as well as decreasing the unemployment number. However, on the other hand, it is increasing the erosion act too. Erosion comes constantly, and now it is worsen by the island reclamation. It does not have to be explained, sea level rise will go up continuously. 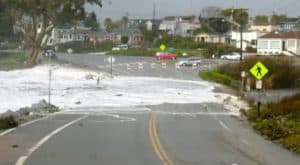 A study which was written by Milly (2002), states that flood disaster is gradually increasing in these decades. The flood contributes in the decreasing area of coastal places.

The flood carries away the beach sand little by little. Soon, we will lose our beach area as one of great entertaining places to refresh ourselves. Business established around coastal area will also lose their work spaces.

If the sea level keeps rising, the damaging floods will also comes in a bigger amount. It will destroy buildings and houses around coastlines. The building and house decay causes material losses. Besides, our environment become a mess one. Flood drowned our environment, and what is next? We will infected by diseases such as diarrhea, cholera, and dengue fever.

Coastline’s soil is in danger of the increasing salinity rate due to sea level rise. A study written on European Commission news in 2016 state that sea level rise causes coastal area to be more saline. The study did an experiment to test whether the increasing of soil’s salinity really affect the organism lives in soil. The result of the study is that salinity in soil made a 20% and 50% reduction of the organisms.

The contamination by sea water impairs the soil organisms which have role in maintaining the soil condition. If sea level rises constantly, the reduction of soil organism will get higher and we will no more have good soil condition. What is the effect of this condition to human? We will no more eating plants and crops in good qualities. Unconsciously, we keep eating these kind of plants of crops in these days. We may not feel the bad effect of the unhealthy plants and crops we have eaten, but later our health will go down deliberately. 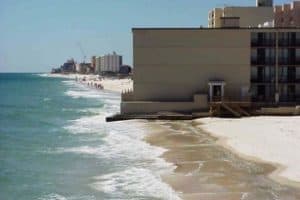 Sea level rise in today’s age causes the diminished of our recreation places. Beach, one of the most recreation place which is beloved by many people, will lost their attractive side.

The sea level rise increases the dangerous erosion. It removes the rocks and sand to other places, making the coastlines into a smaller space. Beach visitors will no longer have enough space on beach area. Stronger storms exist, and it is getting closer to the coastlines. As the beach becomes dangerous due stronger storms, it is clearly seen that business around coastlines could be closed.

The lost of beach area will go faster because of another catalyst, which is greenhouse gases. These gases are also contributes to the rising sea level. The concentration of greenhouse gases has increased in Earth’s atmosphere. Researchers believe that the increasing process of the gases is supposed to raise the temperature on Earth in 21st century. The gases contribution boost the Earth’s temperature from 1.5 percent to 4.5 percent and will be resulting on faster rising sea level.

If the faster rising sea level expands, it will escalates beach area condition. In today’s era, beach are already having erosion problems. Moreover, now it is worsen by the greenhouse gases which give contribution to sea level rise. Consequently, beach over the world could be really lost its attractiveness. We will lose our one of our best recreation place sooner or later. 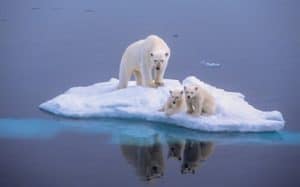 This rare animal is the one which got the bad impact of sea level rise. These kind of bears really need ice to sustain their live. However, their habitat is in danger to disappear. The water keeps warming, and the ice continues to melt.

This event is happening until these days, even in a worse way. So many factors could fasten the process of ice-melting process in polar bears habitat. These bears use ice for their every day life. They need ice to travel and for living place.

Meanwhile, Female polar bears make dens on their sea ice habitat to stay during their birth. Moreover, these bears need sea ice platforms to make the reaching seal prey easier. So, if ice does not exist, polar bears are in the same condition; harm to be disappeared. 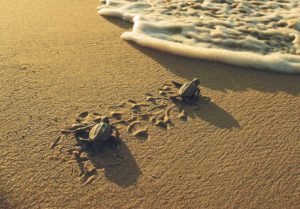 Another coastal species which is having bad impact of sea level rise is sea turtle. They need beach sand as the place to lay their eggs.

Moreover, they also have a habit to go back in the same beach, to lay another next generations of them.

However, beach in today’s age is not the same as previous centuries. Beach is eroding, losing many of its area, as well as its sand.

Therefore, this means that the next generations of sea turtles could not live. It will end up in mortality. 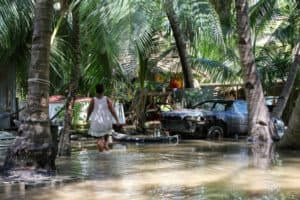 This creatures are also in danger of sea level rise. Sea level keeps rising and it could be predicted that sea water will drown the environment around coastlines in unexpected time.

If that prediction happened, other creatures like human or animal could just move to find other place to live. On contrary, plants cannot do the movement. Plants only wait for their seeds or pollen be brought by insects to other place. So, if sea water reach the place where plants live, the plants will just receive the contamination and waiting for their death.

After knowing several effects of sea level rise, what environment that is harmed the most? It is coastlines, definitely. Erosion has decreased the coastline spaces and makes it no more interesting to visit and difficult to live. The coastline spaces are getting smaller, and people who live in there lost their living place also. If the people are having business which mainly used the beach area, no need to mention, they will lose their business too. Moreover, storm surge has the opportunity to harm people who live around coastlines.

Coastlines’ people are also forced to do migration due to the bad soil quality. The increasing of coastlines’ soil salinity makes the soil no more suitable for plants and crops. The plants and crops could not grow in appropriate way, and the result is lacks of food sources. As already mentioned before, people who eat plants and crops which its soil contaminated, will decrease people’s health. They will not eat nutritious food because of the soil contamination in their foodstuffs.

Regarding to this case, people live in coastal regions is forced to move to other living places. This will burden their live continuation. When they get a new place to live, they likely need to start their live from the beginning. They need to buy or rent new living place, which is not easy to do. They also have to find other job which suits their ability. Furthermore, they should adapt with the new environment; people around them, new workplace, criminal events, and many unexpected things.

Storms in these days are also getting dangerous. Seems like the storms getting easier to attack human and its environment. This storms power rise is caused by sea level rise too. When the sea level gets higher, storms are also rising up its power. As the result, another effect of sea level rise occurred, which is storm surge.

Storm surge is when the sea water level goes abnormal during a storm. Storm’s winds is the main point which formed the storm surge. The storm winds push the water on the sea, and then resulting on storm surge. This disaster will make human material and environment loss become worsen. Human will lose their environment immediately if these storms occurred.

Great storms will also rising the level of other sea level rise effect, which is erosion. Two researchers named Morton (1994) and Galgano (1998) specified that a great storm can cause erosion act into a quick movement than before. The erosion process will happen only in few hours or days. This erosion becomes more dangerous owing to the slower recovery process of environment than the great storm attacks.

Studies, Reports, and Predictions about Sea Level Rise and Its Effects

In December 2015, Special Staff of Coordinating Economic Minister named Lin Che Wei, shared the information that Indonesia will lose around 2,000 islands in the future. She was not waffling, it is a fact. She stated that information based on the data from the Ministry of Marine and Fisheries. The government in Indonesia has a belief that sea level will keep increasing and Indonesia will lost many of its islands.

What is being afraid by the government is really happening now. Bali, one of tourism regions in Indonesia, is encountering the phenomenon of sea level rise. There is a prediction that sea level rise in the Island of God will result the island to become a smaller one. Because of the rising sea level, this island will lose approximately 8.6 percents of its area in 2050. Later, this worse condition will surely harm the life sustainability of the island. If sea level rise keeps continue, Indonesia will lose one of its pride.

4 Effects of Ocean Currents on Human and Marine Life