The whale shark is one of the greatest fishes to have ever known. The whale’s whole body length reached up to 12 meters, with a weight up to 34 tons. Then, whale shark also have a big mouth. Two small eyes lie in the front of end his flat. As well as has wide head. On the other hand, whale shark believed already existed since 60 milion years ago.  These 15 facts of whale shark will give you some important information to know and reveal why this species can be the best thing the ocean can have.

1. Animal which act as filter feeder 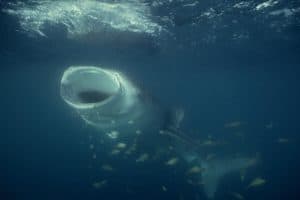 Filter feeding means that the animals feed by straining suspended matter and food particles from water, typically by passing the water over a specialized filtering structure. Filter feeders play such an important role in clarifying water and are therefore considered as ecosystem engineers.

The whale shark also feeds by active suction feeding. This occurs when they are in a vertical position. The animal opens and closes its mouth, sucking in volumes of water, then expelled them through the gills. Information on feeding behaviour, when correlated with sighting data, may help researchers understand how shark appearance is connected to natural events in the marine environment.

The whale shark’s most common diets are plankton, copepods, krill, fish eggs, jellyfish, red crab larvae and small nektonic life, such as small squid or fish. To eat, the whale shark juts out its formidably sized jaws and passively filters everything in its path. This technique, called as “cross-flow filtration,” is similar to how some bony fish and baleen whales feed.

2. Animal that existed longer than it actually scientifically learned 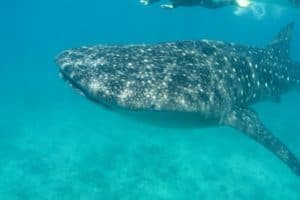 The whale shark is a relatively recent introduction to the human record of the ocean’s inhabitant.

However, the ancestry of this shark jumps back to the Jurassic and Cretaceous periods 245-65 million years ago when the present groups of sharks started to exist.

The first whale shark specimen came into sight in 1828. The discovery took place off the South African coast.  Later that year, Dr. Andrew Smith formally described this species as the largest living shark in the ocean.

This species barely come to view. In the mid-1980’s, there had been less than 350 confirmed sighting of whale sharks all over the oceans.

3. There are plenty best spots to dive with them 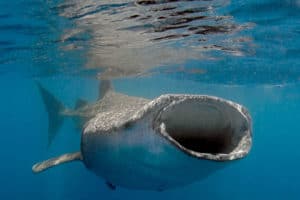 Whale shark encounters rank is nearly at the top of any diving bucket list. Instead of using a regulator, the people are most likely wearing snorkeling stuff while meeting this giant fish. That’s because the whale sharks are often near the water surface. Somehow, it gives such a sensational vibe to the diving lovers.

There are some best spots in the world where people can swim with this species. In Holbox, Mexico, the local fishermen paid no attention to the whale sharks that came across their waters every summer, since they didn’t consider the animals a food source.

The whale shark becomes one of the town’s prime attraction since the tourist spread the words of swimming with the whale shark. For the best encounter, the tourists shall come in mid-July to August.

In Gladden Spit, Belize, the spawning of cubera snappers draw the whale shark to the sight. Three days either side of the full moon gives tourists the best chance at seeing the giant fish. The tourist can plan their visit between April and May, where the snapper spawning lures the mammoth fish to Gladden Spit.

4. Animal who has gentle characteristic 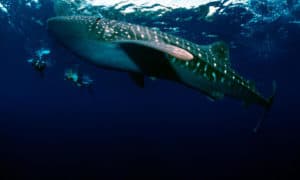 Despite the fact the whale shark is a shark, which scares us to just hear its name, it’s actually safe to dive around with the whale shark. They’re not the man-eater type like the other sharks we know on TV.

Human is not on its menu that mostly consists of tiny micro-organism food. Its enormous row of teeth brings no risk for human. Its average speed is sort of low that makes it safe to swim alongside the humans. Hence, the whale shark is a very docile and gentle giant. 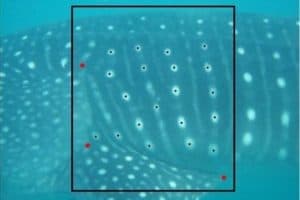 Whale sharks have five large pairs of gills. Their head is wide and compressed with two small eyes at the front. The body colors are gray with a white belly. Their skin is marked with pale yellow spots and stripes.

Like human fingerprints, these spots and stripes are unique to each individual. This allows people to identify them. By taking pictures and cataloging them, World Wildlife Fund (WWF) has identified 458 different whale sharks found in Philippines.

6. A loner that love to gather in dinner 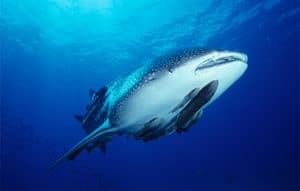 Whale shark often seems to live its life alone. As a filter feeder, the whale shark is an unusual kind, because they prefer warm tropic and sub-tropic which produce less plankton. This is why the whale shark has to travel a great distance alone to find the sufficient food.

Although this species prefers to wander the ocean by itself, it loves to dine together with a large group of its species. This gathering occurs where there are plenty of plankton for them to feed on. Each year, when the coastal areas bloom and the coral reefs spawn, the whale shark will find more food than usual.

Beside some facts above, there are also some interesting facts of whale shark that maybe you don’t know before. As follows:

Meanwhile, The table below shows the taxonomy of whale shark, as follows:

8. It’s common to find it around Australia

Australia is one of the most reliable locations to discover whale sharks. There are also many regular sighting’s reports from many other regions including India, the Maldives, South Africa, Belize, Mexico, the Galapagos Islands, Southeast Asia and Indonesia.

In Australian water, the whale shark most commonly appears at Ningaloo Marine Park (and to a lesser extent at Christmas Island and in the Coral Sea) and further south than Kalbarri (on the mid-west coast of Western Australia) and Eden (on the New South Wales south coast). There are also reports from Commonwealth waters between Australia and Indonesia.

The whale shark is the largest among all the fishes and the sharks in the world. Their average lengths range from 4 to 12 meters. They can weigh about 10 to 20 tons. Their mouth alone is about 1 meter in width.

Some of the largest specimens have existed in records. One of the largest verified specimens got caught on 11 November 1947, near Baba Island, in Karachi, Pakistan. Its measured length was 12.65 m and weighed about 21.5 tons. Although there were few rumors about the larger and heavier specimens found somewhere else, there were no scientific records to support them. The lack of accurate measurement made it hard to verify the actual weight. No reliable documents for these claims.

10. It gives birth to live young inside the eggs

The whale sharks are ovoviviparous. The embryos that develop inside eggs remain in the mother’s body until they are ready to hatch. The indication of the shark’s ovoviviparity got capture in July 1996 while a female was pregnant with 300 pups. It gives birth to live young which are 40 to 60 cm in length. Proof indicates that pups are not all born at once, but rather the female retains sperm from one mating and produces a steady stream of pups over a prolonged period.

11. Human is its only predator

Human activities have caused some kind of threats for the whale shark. Its vulnerability rises as this shark swims near the surface where it can easily get struck by the ships, hunted for its skin and meat or accidentally tangled by the fishermen’s fishing gear. Whale sharks are pretty valuable on international markets. In Pamilacan, Philippines, dried whale shark meat has been one of the main sources. Because of these threats, The International Union for Conservation of Nature (IUCN) listed this species as vulnerable.

Whale sharks can dive to such extreme depths. In fact, they can dive up to 1,500 m deep. One tagged shark in the Gulf of Mexico was recorded diving up to 1,927 m. Though scientists aren’t sure why they do this, some believe that it’s how they regulate their body temperature, keeping cool while still staying on the move. They just have to be sure to get back to the surface to warm up afterward.

The whale shark inhabits all tropical and warm-temperate seas, usually between latitudes 30°N and 35°S. It swims in both deep and shallow waters and the lagoon of coral atolls and reefs. This species seems to prefer surface sea-water temperatures between 21 – 25°C. The sharks regularly make appearances at locations where seasonal food ‘pulses’ rise

Whale sharks are highly migratory, although these ‘migration patterns’ are hardly understood. Satellite tracking of whale sharks in US waters and in the South China Sea uncover the distances the whale sharks can reach, which exceeds 1000’s kilometers. These migrations may take years to achieve.

The average whale shark can live for 100 years. Nevertheless, they only become sexually mature at their early 30 years of age. Although they can give birth to 300 pups at one time, their survival rate seems to be low. If they do survive, they can live for 100-150 years.

8 Types of Algae in the Ocean – Classification