Coral reefs are home to any creatures. These are Herbivores in the Coral Reefs including the types, characteristic and conservation.

Parrotfish are colorful and voracious herbivores. They spend up to 90% of their day eating algae off of coral reefs with their beak-like teeth. They poop sand up to 200 pounds of it per year keeping beaches beachy. These are some species of parrotfish. 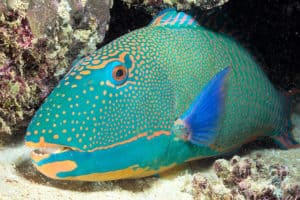 Bicolor Parrotfish (Cetoscarus bicolor) lives in the Red Sea.  This species usually can be found in lagoons and seaward reefs at depths between 1 and 30 m. Bicolor Parrotfish is one of the largest parrotfishes, growing to a length of up to 88 cm.

Since this fish is a sequential hermaphrodite, it starts as female (known as the initial phase) and then changes to male (the terminal phase). For the initial phase, its color is dark brown with a large cream patch on the upper part of the body.

The terminal phase is quite colorful, it’s overall green with pink spotting to the body and edging to the fins. The color of the juveniles is white with a black spot on the dorsal fin and an orange band through the eye. This parrotfish primarily feeds on algae. 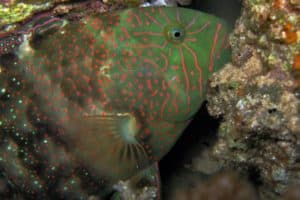 Dotted or viridescent parrotfish (Calotomus viridescens) is a species of parrotfish native to the waters of the Maldives, and the Red Sea, from the Gulf of Aqaba to south to the Chagos Archipelago. The head and body colors are gray-brown with darker scale edges, paler ventrally. The dotted parrotfish can reach the length 21 cm at maximum.

The species inhabits coral and rocky reefs and grass bed areas to depths of about 30 m. It grows singly or in small groups. The main feeds are marine angiosperms and epiphytic algae. They are caught mainly with traps, nets and other types of artisanal gear. 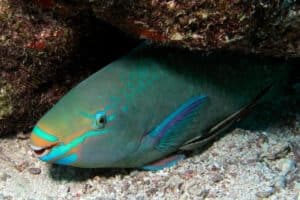 The queen parrotfish (Scarus vetula) is a medium sized parrotfish that inhabits coral reefs in the Caribbean Sea and its adjacent waters. The parrotfishes have powerful beaks, formed from the fusing of the teeth into biting plates. The largest queen parrotfish are brightly colored (blue, green, orange, etc.). The species gets its name from a series of markings on the head, above the eye, that looks like a crown.

Juveniles and young adults colors are a somewhat drab and brownish. The unique behavior of this species is broadcast spawning, where females release eggs and males release sperm into the water column above the reef, at the same time.

Until today, parrotfish’s number has decreased due to overfishing. The Caribbean reefs where the parrotfish belongs have gotten increasingly furry with algae over the past for decade, resulting in a far less magnificent picture, and a far less productive and resilient ecosystem. Protecting parrotfish and urchins can help restore coral reefs. It can be done locally and does not require global coordination and cooperation. Algae prevent the growth of coral, so making sure there are plenty of parrotfish grazing the reefs can help coral recover.

The damselfish family contains a great number of species living in warm seas worldwide.  They play various roles including territorial algal farmers, planktivores, and partners living commensally with sea anemones. Below are some species of damselfish. 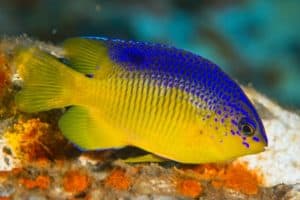 Cocoa damselfish live at the front of reefs rich in coral growth around 1 – 30 m widespread the Western Atlantic & Caribbean.  They are sometimes aggressive when guarding their eggs.

The color varies usually with a dark tail spot. They reach up to 13 cm in length. Adults feed primarily on benthic algae but also on sponges, ascidiacea and anemones, while juveniles’ diets are invertebrates such as harpacticoid copepods and nemerteans.

Meanwhile, in the breeding season, the female lays eggs on the empty shells, stones or other objects and fertilized by the male. This species tends to live solitary.

Bright-eyed damselfish (Plectroglyphidodon imparipennis) is a species of damselfish that lives in the Indo-Pacific. Adults can grow up to 6 cm. The color of this fish is white with a yellow caudal fin. The dorsal fin has 12 spines and 14-15 soft rays, while its anal fin has 2 spines and 11-12 soft rays. Adults live exclusively in the surge zone of seaward reefs. They always stay close to the shelter of small holes or sea urchin furrows in bare rock. This species mainly feed on benthic algae and small invertebrates. Eggs are demersal and stick to the substrate. Males protect and aerate the eggs.

Although the conservation status of damselfish is barely known, it is likely not at any risk of extinction at this time. Nevertheless, according to estimated negative changes to reef health throughout the Caribbean in the next decades, it is important to continue to monitor damselfish and other species that rely on reefs as their primary habitat. 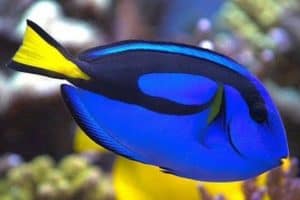 Adult regal blue tang fish typically weigh around 6 kg and are 12 to 38 cm long. Males are typically larger than females. Their oval bodies are bright blue in color with yellow pectoral fins and yellow, flag-shaped tails.

On the other hand, these fish are usually found in pairs or in small groups with 10 to 12 members. Fertilization occurs externally. Females expel their eggs into the water above the coral, and the males expel sperm. 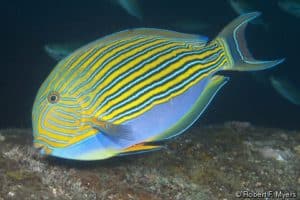 Clown tang (Acanthurus lineatus), lined tang, or blue-lined surgeonfish inhabits throughout the Indo-Pacific from East Africa to the Marquesas at depths up to 15 meters. They mainly feed on filamentous algae. This species reaches about 38 cm in length. The body has black-edged blue and yellow stripes, and yellow stripes at the top of the head. The fish is territorial. A large male protecting a feeding territory and a harem of females.

The adults may also school, and they form groups during spawning. Juveniles are solitary. The fish is mostly herbivorous but sometimes may eat crustaceans. Since this species is very beautiful, it’s high in commercial and ornamental value. In some areas, it is highly exploited, but it lives in many protected zones. 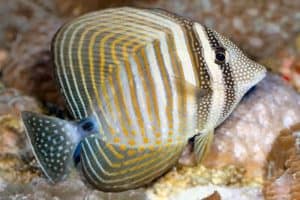 Rabbitfish is closely related to surgeonfish family. They both have a laterally compressed body and small mouths. The rabbitfish is only native to the Indo-Pacific. But there are species that have immigrated, through the Suez canal, from the Red Sea to the Mediterranean. Below are some species of rabbitfish. 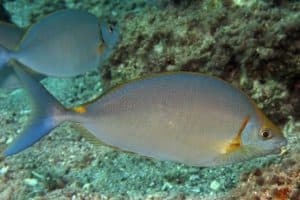 Brown markings become more important when it is threatened, and its fins will become rigid and erect. They are commonly in groups of 10 to 15 grazing on algae in shallow rocky areas and reefs. 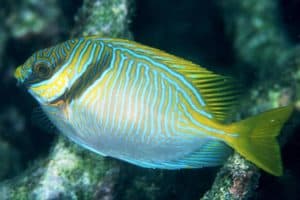 Barred spinefoot (Siganus doliatus), scribbled rabbitfish, pencil-streaked rabbitfish, barred Spanish mackerel, blue-lined rabbitfish or two-barred rabbitfish, is a species of rabbitfish native to the western Pacific Ocean where it occurs on reefs and in lagoons. This fish grows to a length of about 25 cm. This fish is yellow with a network of fine blue lines on the body, giving it a pattern that looks like a printed circuit board.

A pair of barred spinefoot spends about 80% of their time together and are seldom out of visual range. Juvenile form schools, but when they reach a length of about 7 cm they start to divide up into pairs, which may remain in the schools alongside smaller fish.

Those are the Herbivores in the Coral Reefs you should know. Herbivores are very important for the reef as they keep thick mats of filamentous and leafy algae from smothering the corals. They keep the mat only 1 to 2 mm thick and can remove vegetation from a 10 m wide ring around the reef. These fish store feces in the small crevices where they hide, which is important in supporting the growth and diversity of corals.

Coral reefs are very complex ecosystems, but luckily keeping the safe is not. Just don’t catch fish faster than they reproduce, don’t destroy the corals or pollute the water, reduce atmospheric CO2, and protect some areas as marine reserves.