Ocean birds live their entire or part of lives within the ocean environment. Most ocean birds nest in colonies, which can vary in size from a few dozen birds to millions. They feed both at the ocean’s surface or below it. The ocean birds can be highly pelagic, coastal, or in some occasions spend a part of the year away from the sea entirely. There are many birds inhabit in ocean ecosystem and these are 15 Types of Ocean Birds that you need to have a look at. 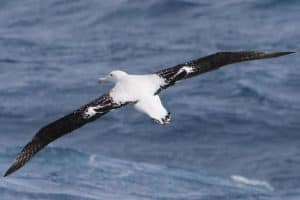 On the other hand, the birds breed on South Georgia Island, Crozet Islands, Kerguelen Islands, Prince Edward Islands, and Macquarie Island. The wandering albatrosses are night feeders. They feed on cephalopods, small fish, and crustaceans and on animal refuse that floats on the sea. 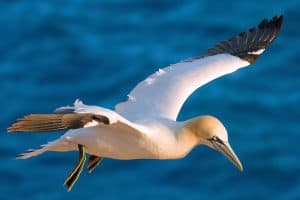 The Northern Gannet (Morus bassanus) is a seabird native to North Atlantic on coasts influenced by the Gulf Stream. They commonly nest in large colonies, on cliffs around the ocean or on small rocky islands. The summer temperature of the waters at the surface near to these cliffs are between 10 and 15 °C. The structure these birds are adapted to dive vertically into the sea at velocities of up to 100 km/h.

Furthermore, their diet consists of Sardines, anchovies, haddock, smelt, Atlantic cod and other shoal-forming species. This type of ocean birds also take the remains thrown into the sea or fly around the boats to catch fish from the fishing nets. 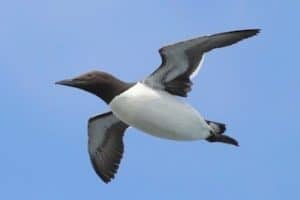 The common murre (Uria aalge) is a large auk that has a circumpolar distribution, including low-Arctic and boreal waters in the North Atlantic and North Pacific. These ocean birds spend most of its time at sea. They only come to land to breed on rocky cliff shores or islands.

Common murres have fast direct flight although not very agile. They move better underwater, usually diving to depths of 30–60 m. Unlike the other birds, common murres make no nest. Their single egg is incubated on a bare rock ledge on a cliff face. 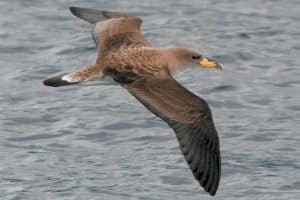 The Cory’s shearwater (Calonectris borealis) is a large shearwater that breeds on Madeira, the Azores and the Berlengas Archipelago in Portugal and the Canary Islands in Spain. This shearwater grow into 45–56 cm in length and with a 112–126 cm wingspan. The upper-parts body color is brownish-grey , while the underparts are white and yellowish bill.

In addition, these birds feed on fish, molluscs and offal. They can dive intodepth of 15 m or more in search of prey. Cory’s shearwaters like to follow fishing boats, where it indulges in noisy squabbles. 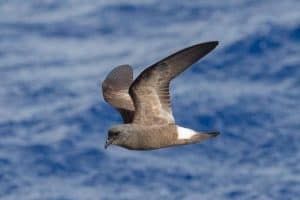 The band-rumped storm petrel (Oceanodroma castro) is of the storm petrel that breeds on islands in the warmer parts of the Atlantic and Pacific Oceans. These birds are strictly nocturnal at their breeding sites to avoid predation by gulls and peregrines. They will even avoid reaching land on clear moonlit nights.

On the other hand, the females petrel lay a single white egg per breeding attempt in the nest colonies close to the rock crevices. at sea. The birds feed by picking up invertebrates, small vertebrates and sometimes carrion from the water surface. 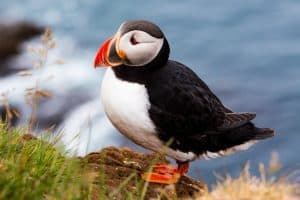 The Atlantic puffin (Fratercula arctica) is a species of seabird which is the only puffin native to the Atlantic Ocean. The bird has a black crown and back with pale grey cheek patches and white underparts. This puffin spend the autumn and winter in the open ocean of the cold northern seas and come back to coastal areas in late spring to start the breeding season.

Meanwhile, the nests take place in clifftop colonies. To lay a white single egg, they dig a burrow. When the chick is mature, it makes its way at night to the sea to swim away from the shore and does not return to land for several years. 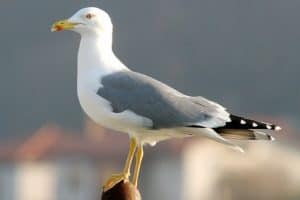 The yellow-legged gull (Larus michahellis) is a large gull of Europe, the Middle East and North Africa. They have a grey back and have more extensively black wing tips with few white spots. There is a red spot on the bill as adults, and a red ring around the eye.

Then, since these birds are omnivorous, they pick up rubbish tips, seek suitable prey in fields or on the coast, or robbing smaller gulls and other seabirds of their catches. This type of oceans birds commonly breed in colonies and the nest is a sometimes sparse mound of vegetation built on the ground or on cliff ledges. 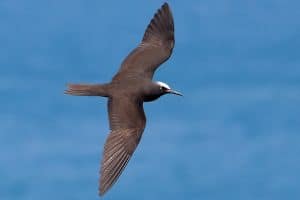 The black noddy  (Anous minutus) is a seabird which has a worldwide distribution in tropical and subtropical seas. They have colonies widespread in the Pacific Ocean and more scattered ones across the Caribbean, central Atlantic and in the northeast Indian Ocean. Its plumage is dark and the crown is pale. They gather fish and squid by flying low over the surface of the sea to pick them up.

Furthermore, at sea, this bird usually inhabits close to its breeding colonies within 80 km of shore. In order to roost, they return to their colonies, or to other islands at night. 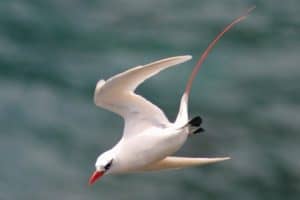 The red-tailed tropicbird (Phaethon rubricauda) is a seabird that nests in colonies on oceanic islands including the Indian and Pacific Oceans. Generally, the bird has a white plumage, often with a pink tinge, a black crescent around the eye and two thin red tail feathers. The bird also has a bright red bill and black feet.

In addition, they mainly choose coral atolls with low shrubs as breeding spots and nest underneath them. These birds feed offshore away from land, individually rather than in flocks. The red-tailed tropic-bird feed on fish, mostly flying fish, and squid. 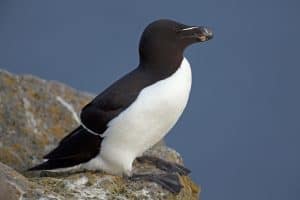 The razorbill (Alca torda) is a colonial seabird that has distribution around North Atlantic. The bird’s body color is black with a white underside. They only comes to land to breed. The razorbill is a type of ocean bird mates for life, meaning they only choose one partner their whole life. These agile birds nest along coastal cliffs in less exposed crevices.

Meanwhile. during breeding, both male and female keep the nest safe. Females choose their mate and there will be a competition between males. Once the female choose the right male, the pair will last for their entire life. 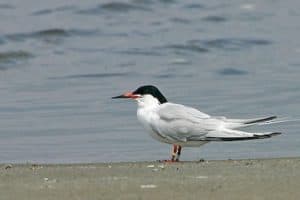 The roseate tern (Sterna dougallii) is a tern that breeds on the Atlantic coasts of Europe and North America, and winters south to the Caribbean and west Africa. The bird has a black thin sharp bill, with a red base which develops through the breeding season. The adults have orange-red legs and very long, flexible tail banners. The get thair diet by plunge-diving fish from the sea.

Unlike the other terns, the roseate tern shows some kleptoparasitic behavior, stealing fish from other seabirds. The bird nests in a ground scrape, in a hollow or under dense vegetation to lay one or two eggs. 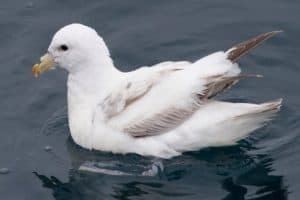 The northern fulmar (Fulmarus glacialis) is a highly abundant seabird that occurs primarily in subarctic regions of the North Atlantic and North Pacific oceans. The color of this bird is gray and white. It has a pale yellow, thick, bill and bluish legs. Their walking ability is limited, but they are strong to fly. Theses birds live long, with a lifespan of about 31 years.

This fulmar’s diet includes shrimp, fish, squid, plankton, jellyfish, and carrion. The northern fulmars nest in large colonies, with the nest in form of a scrape on a grassy ledge or a saucer of vegetation on the ground. 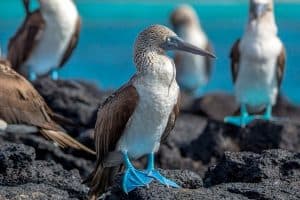 The blue-footed booby (Sula nebouxii) is a marine bird inhabits subtropical and tropical regions of the eastern Pacific Ocean. This bird has bright blue feet, which is a sexually selected trait.

Meanwhile, males show their feet in an elaborate mating ritual by lifting them up and down while strutting before the female. It feeds mainly on fish by diving and sometimes swimming underwater in search of its prey. These birds usually hunts in groups, but sometimes hunts alone. 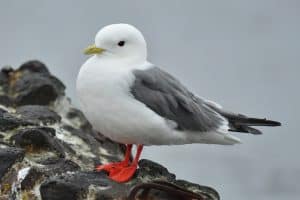 The red-legged kittiwake (Rissa brevirostris) is a seabird that breeds in the Pribilof Islands, Bogoslof Island and Buldir Island in the Bering Sea off the coast of Alaska, and the Commander Islands, Russia and spends the winter at sea. The red-legged kittiwake has a well-developed hind toe and reddish legs. The bird feeds on fish such as lanternfish, squid and invertebrates.

On the other hand, these birds spend the summer at the cliff breeding colonies. They nest on ledges and migrates out to sea in September to overwinter in the north eastern Pacific Ocean and the Gulf of Alaska. 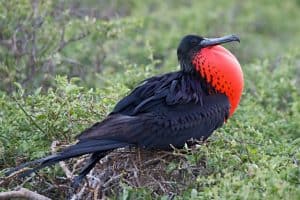 The magnificent frigatebird (Fregata magnificens) is a seabird occurs over tropical and subtropical waters off America, between northern Mexico and Ecuador on the Pacific coast and between Florida and southern Brazil along the Atlantic coast.

Furthermore, this bird has a large, lightly built body with brownish-black plumage, long narrow wings and a deeply forked tail. It feeds on fish taken in flight from the ocean’s surface and sometimes indulge in kleptoparasitism, disturbing other birds to force them to give up their food.

Those are 15 Types of Ocean Birds that will improve your knowledge about animals in ocean ecosystem. These birds depend on ocean for feeding by picking up what they find on the water surface. So, if we keep the ocean healthy, these birds will have healthy diet.

17 Endangered Species in The Ocean Biome

17 Herbivores in The Pacific Ocean