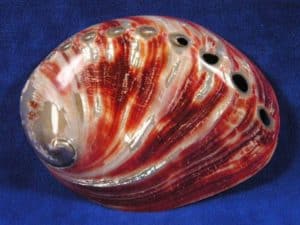 The Red abalone currently holds the title as the biggest abalone there is in the whole world. These abalones can be found in places such as Canada, Mexico and California. However, a lot of them are mainly in California. (Read more: Endangered Species in Pacific Ocean)

They are considered as big because their shells can reach up to 31 cm. Moreover, they are very thick and also tough. They are shaped like a dome and naturally red. Other than that, there are small holes on the shells at the amount of three or four. These holes help them to breathe. These creatures do not contain poison. They cannot harm since they have no teeth and they cannot sting either. The Red abalones are actually quiet creatures. (Read more: Endangered Species in Atlantic Ocean)

Besides being famous for being the largest abalone, they are also famously known for their tasty meat. Red abalones are farmed for commercial purposes especially for food. 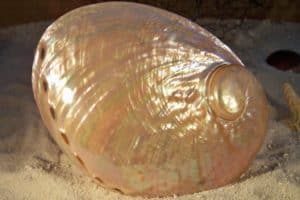 Similar to the Red abalones, the White abalones population are mostly in California and Mexico. However, their population is small. Their shells are oval with up to 5 holes. Furthermore, their size can reach 25 cm.

For colours, they are yellow with a shade of green and others are also beige. These sea snails are also very well known for their meat as they are tender and gives off a lot of flavour in comparison to other Types of Abalone. (Read also: Largest Clams in the World)

The sad news is that according to IUCN Red List of Threatened Species, the White abalones are endangered species. Various reasons that contribute to their status include overfishing and insufficient numbers of adult White abalones. However, efforts are continuously made to recover their population. 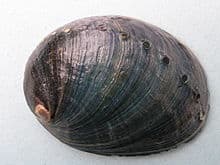 The Black abalones are mostly distributed on the United States, specifically the Pacific coast. These creatures are quite small with size ranging from 10 cm to 20 cm. Additionally, their shells are a mixture of black, dark blue with green and brown undertones. (Read more: Endangered Dolphin Species)

They are also smooth in the shape of an oval. Moreover, there are around five or seven holes along the shell. Sadly, activities such as overfishing have made these sea nails to become critically endangered. Other than that, diseases, illegal harvest and the destruction of their habitat continue to reduce their population. For years, the Black abalones are used for food, all sorts of ornaments and also fish hooks. 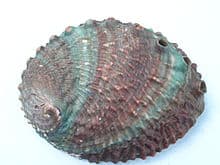 The Pink abalones are also commonly found on the Pacific coast of North America. For the colours of their shells, light turquoise and red tones are visible. Unlike the Black abalones, their shells are not smooth. They are the opposite since the surface is jagged and irregular.

Moreover, they are round and elevated. Around 2 or 4 respiratory holes are present on the shells. The Pink abalones are species of concern because they are negatively affected by climate change and increased harvesting. Therefore, their population continues to be less and less. 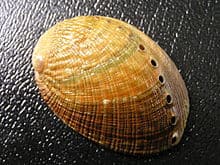 The Flat abalones are also common in the Pacific coast and the Pacific Ocean. Their size can reach up to 17 cm. The shell is oval in shape and quite flat. However the edges of their shells are smooth. (Read more: Endangered Tuna Species)

The colours of their shells are yellowish red, similar to a brick, with blue, green and white tones too. As for the respiratory holes, they own four up to eight holes. There has been no reports whether these abalones are edible. The shells of these sea snails are majorly used for ornaments or beads. 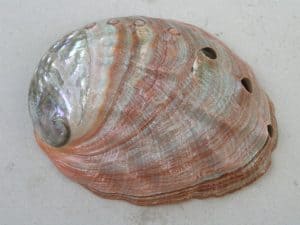 The Green abalones are quite large as they grow to a big size. It is said that a grown Green abalone can reach the size of 25 cm. Found mostly in Californian waters, these sea snails have brown greenish shells. They are shaped in oval with 5 to 7 respiratory holes. (Also Read: Smallest Dolphins in the World)

Furthermore, the respiratory holes that they have are actually a bit higher than the surface of the shells. The Green abalones are mostly sought after by jewelers . The reason for this is because of their interior shell. Inside their shells, it is a beautiful blue greenish colours. Just like the Pink abalones, these green ones are also species of concerns. Research and studies are continuously carried out to further understand their species. (Read more: Effects of La Nina) 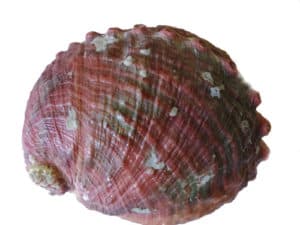 The Northern abalones are one of the oldest species of abalone out there. It is recorded that they have existed on this earth for approximately 500 million years. They can grow up to 8 cm. Some can even reach 15 cm although that is rare. Their shells are flat and thin with coarse surface. (Read more: Endangered Sea Lions)

Other than that, there are also spirals present on the surface. There are around 6 respiratory holes on the shells. Furthermore, they are greenish brown with blue and white tones too. Currently, the population number of this species is under threat since they are endangered. Causes include over harvesting, climate change, disease and habitat destruction.

One can find the Elegant abalones in the Western Australia waters. Their size is quite small as they often measure up to 7 cm or 10 cm. Their shells are long and narrow.

They are also bright orange with shades of white in a marbled pattern. Along the surface of the shells, there are repeated half spiral lines. These sea snails are hailed for their beauty even though they are rare. Thus they are called as the Elegant abalones. 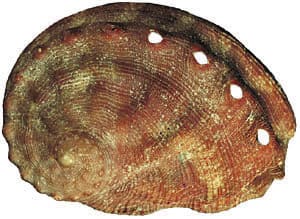 This particular abalone is very rare and can only be found in the waters of the Galapagos Islands as well as the Western parts of Colombia. Other than being very rare, they are also extremely small with size only reaching up to 2 cm.

The shells are light red, similar to the colour of a brick. There are also some white dots. Furthermore, the surface of the shells is not smooth. It is a bit uneven as some areas are more elevated than others. There are 25 respiratory holes on the shells and can be clearly seen lined up on the surface. The shape of the shell is a long oval with quite smooth edges. These sea snails only live in the deep waters as some are found 60 meters deep. 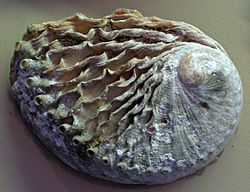 The South African abalones are exclusively found in the surrounding waters of South Africa. The average size for these creatures is around 12cm up to 20 cm. The shell of a fully grown abalones can take the shape of an oval. The colour of their shells is pale yellow with grayish undertones. (Also read: Ocean Seashells)

Some surface area are more elevated than others and there are wrinkles as well. Along the wrinkled lines, there could be some hint of red colouring. The shells do not look quite attractive as they are dull. However, these abalones are highly valued in the market. People have high demands for them because the Asian consumers are willing to pay a lot of money to eat them. Thus, their population are highly exported to other countries. 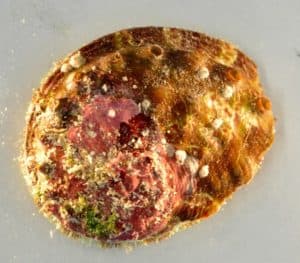 The Sheep’s Ear abalones can be found in various waters of the world. They include Southern Japan, Western Australia, Malaysia, Fiji, Tonga, Thailand and the Pacific Ocean. Some of these sea snails are around 10 cm. (Also read: Types of Sea)

But, some are so small that they can only reach the size of 2 cm. Generally, their shells are oval in shape. Their surface is also not the smoothest. It is jagged with uneven elevation.

There are lines and folds on it. The colour of the shells is red with green undertones and a little bit of white also. These abalones are edible and mostly reside on corals. Other than that, they are usually found around rocks or shallow waters. 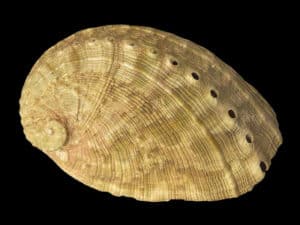 The Green ormers or abalones are commonly found on shores that consists a lot of rocks. They are namely found in European waters such as the Mediterranean Sea, Chanel, Azores and Canary Islands.

There are also reported sightings in some parts of the West Africa. The sea snails can reach the size of an average 10 cm. The shells are oval or commonly said to be shaped like ears. Moreover, they are dominantly pale yellow with a bit of a red undertone.

These abalones own 5 to 7 respiratory holes. As they grow older, the holes shut and new ones are created. These sea snails are famous for their delicious flesh. 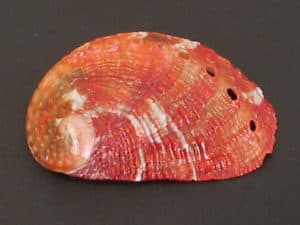 The Squamose abalones can be found in the waters of the Southern parts of Madagascar. They are also found in the Indian Ocean. The size of their shells average size is around 4cm. (Read more: Conservation of Tortoise)

However, some can reach up to 9 cm. The shape of their shells are oval and they are quite long. The surface of their shells is jagged, uneven and there are wrinkles too. The shells have up to 7 respiratory holes. As for their colours, they are dominantly orange with a yellow and red undertones. Some can even look a bit brownish. 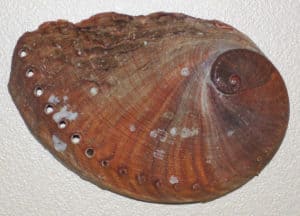 These specific species of Abalone can be found in the waters near South Africa. They are quite the average size since they can grow up to 7 cm. On their shells, there are around 5 or 8 respiratory holes. (Also read: Types of Algae)

These abalones are also oval but the shell is quite thin. Moreover, the colour is red with a hint of purple. There are also white spots on them making the shells look as if there are blood blotches. Thus the name, Blood-spotted abalone. A lot of people consume this abalone. However, these abalones are now protected and people are restricted from eating them. 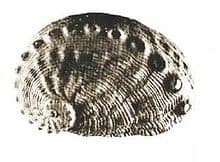 This last species of abalone is extremely unique and rare. It can only be found in the deepest parts of water. Approximately, they are found around 25 to 230 metres deep. The deepest distance ever recorded is 366 metres.

These abalones are really small as they are only 3 cm. The shells are pale red with a number of white spots on them. Moreover, there are also red and orange tones too. They have around 25 respiratory holes but only 5 of them are open. Since these abalones are so rare, people usually offer other Types of Abalone under the name of the Pourtale’s abalones.

The abalones are special oceanic creatures. Even though they are used for different reasons, people are making efforts to conserve them as it is always important to protect every creature on this planet.