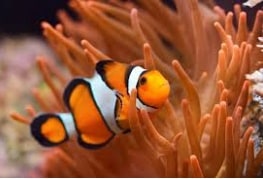 Do you know Finding Nemo? Yeah, this ocean fish is a clown fish. It called as clown fish because the color is like clown. Most color of  clown fish are orange with three white bands on the head and body. The white bands are outline in black.

Their bodies are a bit more than 3 inches (88 millimeters) long on average. Clown fish live in the coral reefs. They are found mainly around certain kind of anemones. The anemone’s tentacles have stinging cells that release a toxin when predator touch it. 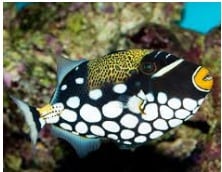 Clown triggerfish has large a white spots on its black belly and small black spots on its yellow black. It has yellow lips and its sharp teeth help it consume a diet of shelled animals.

Clown tiggerfish can grows up to almost 20 inches. This fish resides in many areas of Indian and Pacific Oceans, including Africa, Indonesia, Samoa, Japan and New Caledonia.These fish can be found in clear, coastal waters and around coastal reefs. 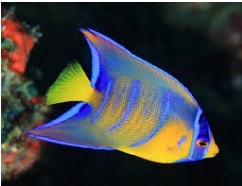 Queen angle fish has a bright colors like bright yellow, green and blue. Queen angle fish type fish with disc shaped body, it makes difficult to see head on but very easy to see from side.

On the other hand, these fish are typically observed alone or in pairs. Queen angle fish are foragers and eat a variety of sessile invertebrates and plants, including sponges, algae, corals and others. 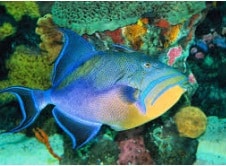 Queen trigger fish has suitably regal colouring; it’s a flamboyant and variable mixture of blue, green and yellow which can be light or dark depending on the fish’s mood. Queen trigger fish lives in coral reefs, nearby sandy and rubble areas.

Meanwhile, Queen trigger fish body can reach up until 60 cm. This fish can be found in the Atlantic ocean and eastern Atlantic. 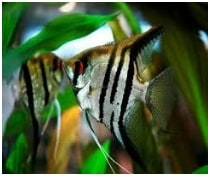 Zebra Angel fish has zebra pattern of multiple thin, dark and vertical stripes. Both of male and female zebra angel fish have a long forked tail, a small mouth and a spine located on the lower curve of the cheek bone. These fish are grows to a length of up 10 inches. Zebra Angel fish live in pairs which like the other angle fish.

Beside that, these fish eat zoo plankton that float freely in water. Their day are spent swimming freely in open waters and taking refuge in the coral reefs at night. Zebra angel fish are found only in the Read Sea and the western  Indian ocean. 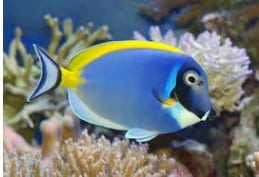 Powder blue tang has a round body with a maximum length up to 23 cm. It whole body is soft blue color, somewhat blackish, while on the fin area is white. Yellow dorsal fin and a long starting from the higher parts of body to the base of tail.

On the other hand, The type food of these fish are moss, rebon shrimp and grass. Blue tang fish spread in the water of Indonesia, like Aceh,Lampung and also Medan. 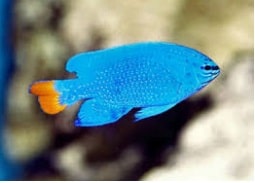 Blue devilfish has body of length 3.3 inches. Most of the body of this fish is blue. Blue devil fish already found in western Pacific and eastern Indian ocean. These fish are associated with warm waters of reefs. The ideal temperature between 74 until 78 degress.

Meanwhile, Blue devil fish is omnivores, they will eat just about anything . Blue devils are also mellow fish  when they are juveniles. When these fish are scared, they’re like to hide in nearby rubble or caves. 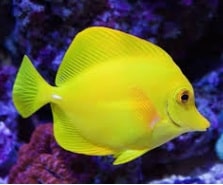 Yellow tang fish also known as Lemon sailfin and Somber surgeon fish. Yellow fish has a body of  length 20 cm. Color of this fish is bright yellow colour. These fish live in Pacific ocean and may live off the coast of Florida in the Western Central Atlantic.

Yellow tang fish also live alone or form loose groups. These fish can be found in areas of lagoons and seaward reefs with prolific coral growth. Yellow tang fish is like to eat fish eggs and small invertebrates that live among algae. 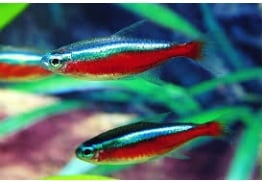 Neon tetra is a small fish with slim body and this fish will reach about 1.5 inches in length. It has red coloring that runs the whole length of its body rather than just the back half.

These little tetras are active schooling fish. They are mor comfortable and show their best colours when kept in a school 6 or more fish. They are one of the most peaceful tetras and a very desirable community fish.

On the other hand, these fish are found in South America in the Paraguay basin, Brazil, Rio Taquari and Pantanal of Mato Grosso. These fish are also omnivorous. 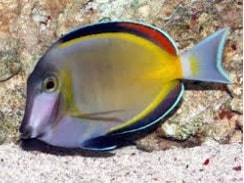 Powder brown tang is deep bodied with an oval disk shape. It lenght can reach up to 8.26 inches. This fish has varrying brown to blackish blue coloring on the body. Powder brown tang is primarily that of an herbivore. These fish are live in a community with reefs. 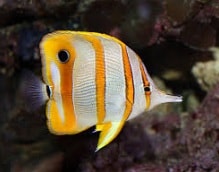 Butterfly fish has amazing array of colours and patterns are among the most common sights on reefs through out the world.  It also has thin body with disk shaped bodies and has round tails too. Butterfly fish can be found in tropical and sub tropical regions of Indian, Pacific and Atlantic ocean.

Butterfly fish live near the coral reefs which serve as hiding place from predators and as the source of food. This fish has vary in size from 3 until 6 inches in length. It named butterfly fish because of the attractive coloration of their body.

They can be black, yellow, orange, red, silver, white in color with different kind of spot and patterns of their body. Butterfly fish is an omnivore. It eats different types of algae and seaweeds, worms also zooplankton. These fish are live in larger groups and these fish are most active during the day, they taking rest in the corals during the night. 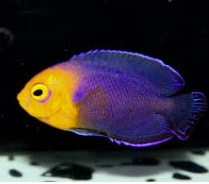 Cherub angel fish is also known as pygmy angel fish. This fish has a body of length  3.2 inches. This fish also has the typical of oval shape body. The body of this fish is a blue to a deep blue colour. Cherub fish can be found in the western Atlantic from Bermuda to Florida to French Guiana, Gulf of Mexico and Caribbean Sea.

Meanwhile, These fish are omnivore, they eat on different algae, brine shrimps and mysis shrimp. Cherub fish  are known as an aggressive fish. 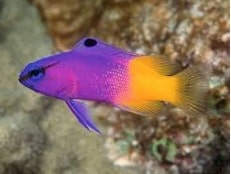 Fairy basslet are tropical members of the sea bass family. They have variety of colours and patterns. Their colour combination of magenta, purple and yellow. Fairy basslet has a body of length 1.5 to 3.1 inches. This fish live in tropical coral reefs from Bermuda to Bahamas and the south of to the west Indies and off the coast of Venezuela.

On the other hand, Fairy bassleat eat mostly plankton, but also catch small marine animals and fish. Fairy basslets gather in groups of up to a dozen. They can be found in  around large coral reefs, as well as ledges and caves. They are generally peaceful and non-aggressive fish. 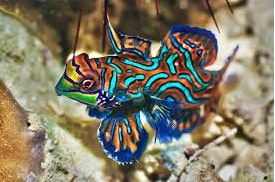 Mandarin fish is also known as Mandarin Dragonet. It has small sized with very little weight and reaching only around 6 cm in length,bright and multi coloured sea fish. These fish are live in mostly under dead corals or near the rubble beds of the ocean.

Meanwhile, Mandarin fish can be found in the Weastern pacific and in the coral triangle of biodiversity including Indonesia, Malaysia and others. Mandarin fish is a carnivore, it likes to eat worms, protozoans and curtaceans like munid isopod. 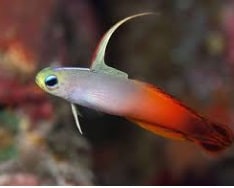 Firefish goby is a little fish that have bright colors. The firefish goby can be found  in the waters of Africa, Coral Sea, Indonesia, Maldives, and the Indo-Pacific. This fish has a yellow head, white anterior and pinkish to orange-red posterior. The length of its body is 3 inches.

On the other hand, Firefish goby known as a carnivore. It like to eats mysis shrimp and brine shrimp. This fish should be kept singly or in mated pairs. 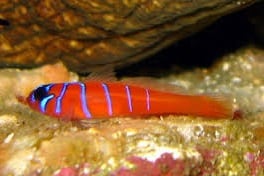 Blue-banded goby is small fish with brightly colored fish that lives on rocky reefs in eastern Pacific ocean. Blue-banded goby as known as micro carnivore. They eat small crustaceans on the reef surface and from the water column directly. 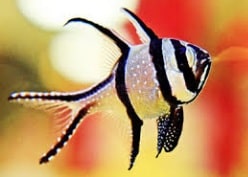 Banggai cardinal fish is marked with white dots with silvery body and there is vertical black bars. One running down the head and other two down the fish’s flanks. Banggai cardinal fish live in small groups of usually between 1 and 6 individuals. This fish is like to eat marine worms, mollusks and fish larvae.

Banggai cardinal fish can be found in around the coasts of 33 islands in the Banngai archipelago, an island group in Indonesia. These fish are living near seabed or around coral reefs but also around sea-grass beds too. 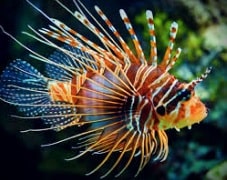 Lion fish also known as dragon fish, tiger fish and turkey fish. Size of lion fish only 2 inches long and that will be reach up until 16 inches in length. Lion-fish are famous by their beautifully colored bodies, covered with red, white, orange, black or brown zebra stripes. This fish can be found in the Pacific ocean. 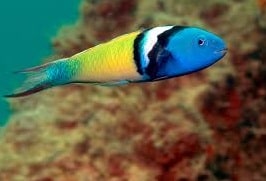 Bluehead wrasse is a small fish that lives on coral reefs and also found in beds of sea grass and they live singly or in groups. Blue-head wrasse has a small body with maximum size 9.8 inches.

On the other hand, This small fish known as a carnivore, it like to eats zooplankton. This fish can be found in Caribbean sea and in the tropical Atlantic. 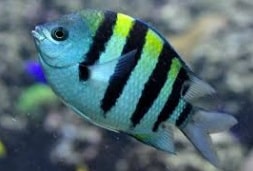 Sergeant major damsel is a very deep bodied fish. The tail fin is deeply forked. It commonly grows to 5.9 inches in length. The body of sergeant major damsel is silver to greenish gray color with a slightly darker head and five vertical black bars. This fish known as omnivore, they will eat all sorts of foods including small fish, fish eggs, may types of algae and many more.

These fish can be found in range of Atlantic ocean. As you know about these fish are very aggressive and this aggression increases as they got older.