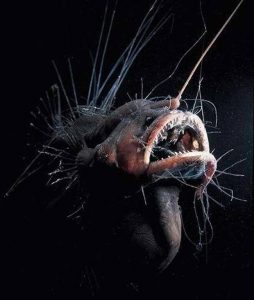 Unlike the ocean animal that live in the upper part of the ocean that we know, these animals also have some characteristics of deep ocean animals.

Because only a little is known about these animals so here are some information that I can share you with that is hopefully can help you to know the animals that live in the deep ocean level.

In the deep ocean, almost all animals are having this transparent body which makes them able to camouflage. With this ability, the animals in the deep ocean will be easier to catch their prey.

5. Feeds on others or act as a water filter

6. Not a good swimmer

Since the body of deep ocean animals contain less proteins and more water, this make them become a bad swimmer. They can swim but not as fast as the animals in the upper part of the ocean. Since swimming and moving your body will require more energy and proteins.

Another facts is that mostly, the animals in the deep ocean are blind. So in order to know their predators or their prey, they will use the other senses aside their vision.

8. Some species was born in the shallow water

Most of the deep ocean animal is classified as nocturnal animal. Having a transparent body and trying to look for food will be easier for them to do it at night. During the days if they are going up to follow zooplankton as their prey, they will mostly hide.

Because of the condition in the deep ocean that is so dark because there is no sunlight, this lead the deep ocean animal to have a large eyes. Larger eyes will help those who has vision can see better. One deep ocean species known as the Colossal Squid has the biggest eyes compared to any animal.

The deep ocean animal also has sharp teeth which enable them to ripped their prey. Since they are a slow swimmer, having a sharp teeth such as viperfish will benefit them to eat their prey.

Another characteristics of deep ocean animals that you surely know is that the animal beneath the deep ocean has a weird shape. Even it is the same shark or squid but some of them has a really weird shape. Their weird shape is somehow being affected by the environment where they are being forced to adapt with the condition of the deep ocean.

Even some species in the deep ocean have no eyes. This may due to the condition of the deep ocean that will make animal who can’t produce light will be useless to have visions. One of the animal that has no eyes is Yeti Crab. To help it survive, it will use another senses to sense everything surround it.

Most of the animal in the deep ocean will have this flexible and soft skeleton. Due to the scarce resources, the animal won’t get proper nutrition that can help them to have a strong and hard skeleton.

See also: Uses of Sponges in the Ocean

If you see the deep ocean animals that has so many small, long, and sharp teeth just like angler fish. Because of it has so many sharp teeth that also has a long size, it won’t be able to close its mouth perfectly. But even if so, it help the fish to consume its prey better.

Every deep ocean animal has develop their stomach and digestion system to be stronger. Surely if the same thing or condition happen towards the animal in the upper part of the ocean or toward the animal that lives in the land, this will be a problem.

And surely there are more characteristic of the sea animal that I don’t mention here but hopefully this can be a good introduction for you to know the deep ocean animal better.