Fish contains many health benefits that humans need, such as omega-3 fatty acids and vitamins such as D and B2 (riboflavin). Fish is also rich in calcium and phosphorus and a great source of minerals (iron, zinc, iodine, magnesium, and potassium). The oceans are the greatest source for catching fish. Overfishing has caused the depletion of the many fish populations. The decreasing number will soon let the fish become extinct. These are 15 Most Endangered Fish Species that you need to know so you can stop eating them to save them from getting close to the extinction. 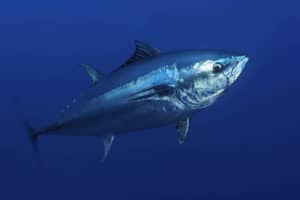 Bluefin tuna is a species of tuna in the family Scombridae. It is the largest among the other species of tuna. There are some species of bluefin tuna based on their native. Southern Bluefin Tuna (Thunnus maccoyii) inhabits in southern hemisphere waters of all the world’s oceans.

Bluefin average lifespan can reach to 40 years. They travel across oceans and can dive more than 4,000 feet. Bluefin tuna swims in high speed. They are like torpedoes. They have retractable fins and their eyes are set flush to their body. This tuna is tremendous predator since the first moment they hatch. They seek out schools of fish like herring, mackerel, and even eels. They hunt by sight and their vision is the sharpest of any bony fish. 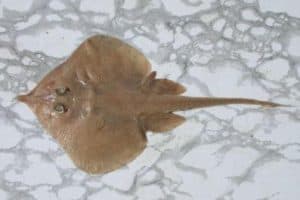 Maltese ray or Maltese skate (Leucoraja melitensis) is a species of fish in the family Rajidae. They inhabit open seas in Algeria, Italy, Malta, and Tunisia. This ray’s body has a brown coat with a white underbelly. Its body is flat and the thinner at the right and left side make it look like it has wings.

The Maltese Ray have thorns around their eyes and a long tail. The tail is typically 10 cm long. The Maltese Ray lives at the bottom of the ocean, around 6000 m in depth. Adults can reach up to the length of 40 cm. Females lay about 10 t0 56 eggs per year.

The Maltese Ray’s prime food is crustaceans such as crabs, lobsters, and shrimps. To get the food, they flap their wings up and down kicking out the dirt and sediments that cover the food.Their major threats are habitat loss and commercial fishing for use and food. Increasing temperature in the water due to global warming causes them to die rapidly. They also commonly swim where the fishermen drop their net to catch fishes. 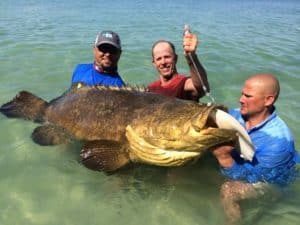 The Goliath Grouper, like most groupers, is an ambush predator. It eats fairly large fishes and invertebrates and even small sharks. It reaches lengths of at least 2.5 m and weights up to 320 kg.

This species is one of the largest predators on coral reefs and along mangrove forests in the Atlantic Ocean and one of the largest groupers in the world. Goliath groupers feed on crustaceans, other fish, octopuses, and young sea turtles. The scientists believe that destructive fishing practices have been their major threat to cause the decreasing number of the species. 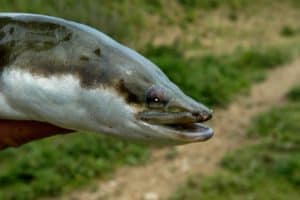 The eel inhabits in the rivers of the North Atlantic, Baltic and Mediterranean Seas. They also occur along European coasts from the Black Sea to the White Sea in Russia. Their spawning takes place in the Sargasso Sea in the western Atlantic.

The population of the European eel is currently under the threats. The eel stocks have dropped in recent years. The threats facing the species are probably pollution, overfishing, habitat degradation, parasite infection and changes in climate. Recent work suggests polychlorinated biphenyl pollution may be a major cause of the depletion. 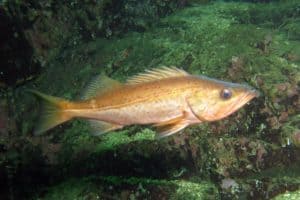 Bocaccio (Sebastes paucispinis) is large Pacific coast rockfish that reach up to 1 m long. They have a long jaw elongating to the eye socket. Their body color ranges from olive to burnt orange or brown as adults. Young bocaccio is light bronze in color and has small brown spots on their sides.

Although its elongate and compressed body form is less bulky, the bocaccio has a large mouth. Bocaccio feeds on fish, including on other rockfish, surf perch, mackerel, sablefish, anchovies, sardines, deep-sea lanternfish, and sanddabs, as well as squid, octopus, and crabs.

The threats for this species are direct fishing, bycatch in other fisheries, and adverse environmental factors. 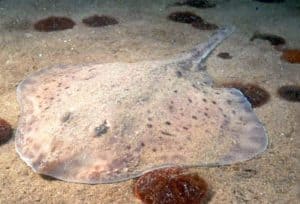 The winter skate (Leocoraja ocellata) is one of the largest species of skate in Atlantic Canada waters. It can reach a maximum size of about 109 cm. The winter skate is a benthic species. It lives over sand or gravel bottoms, usually in depths less than 111 m. However, there’s a report of winter skate captured at depth of 371 m in the Gulf of St. Lawrence.

The orange roughy, red roughy, slimehead, or deep sea perch (Hoplostethus atlanticus) is a deep-sea fish that belongs to the slimehead family (Trachichthyidae). It lives around 180 to 1800 m deep in the waters of the Western Pacific Ocean, eastern Atlantic Ocean, Indo-Pacific, and in the Eastern Pacific. The over-fishing is the major threat for this species. Historically, the United States has been the largest consumer of orange roughy. In 2014, the USA imported around 1,455 tonnes (mainly fillets) from New Zealand, China, Peru and Indonesia. China, in 2015, imported at least 4,000 tonnes (mainly whole fish). However, in recent years, the market for orange roughy in China has raised significantly. The fishery started in the mid-1970s, but full exploitation did not begin until 1979. 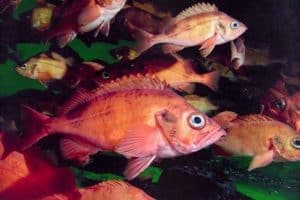 The Acadian redfish (Sebastes fasciatus) is native to the waters of the northwestern Atlantic. This species is a marine deep-water fish that belongs to the family Sebastidae. It swims near the seabed in areas with clay-silt or rocky bottoms at depths 70 to 500 m. The Acadian redfish body color is reddish-orange. It can live up to 50 years or more. Its length can reach up to 50 cm.

Since 1996, IUCN classified the redfish as endangered due to its slow growth rate, low fecundity, harmless nature, tendency to “hit almost any bait,” and is considered a great food fish. 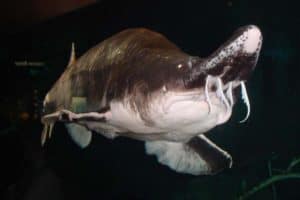 The Beluga or European sturgeon (Huso huso) is a species of anadromous fish in the sturgeon family (Acipenseridae). It can reach the lengths of 7 m and weights of more than 1500 kilos.

The beluga sturgeon is the largest sturgeon and one of the largest bony fishes in the world. Its life cycle resembles the Salmons in that it hatches in freshwater rivers, spends most of its adult life in saltwater seas, and returns each year to spawn upriver.

Overfishing of Beluga Sturgeon is due to its abundant and delicious taste of caviar from the eggs. Moreover, It’s the most desirable caviar in the world. Even though there is a limited legal protection in many areas, its numbers are dropping everywhere that it lives. 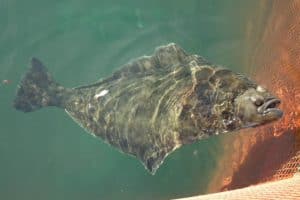 The Atlantic halibut (Hippoglossus hippoglossus) is a flatfish that is a member of the family Pleuronectidae. The Atlantic Halibut usually lives on the ocean floor at depths between 50 and 2,000 m, but it occasionally comes closer to the surface. The native habitat of the Atlantic halibut is the temperate and arctic waters of the northern Atlantic.

As the largest flatfish in the world. it can reach the lengths of up to 4.7 and weights of 320 kg. Its average lifespan is about 50 years. The endangered status of this species is because the Atlantic Halibut is fish that is commonly sold in supermarkets around the world, and which have a very high risk of being sourced from unsustainable fisheries. 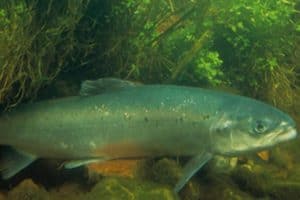 There are three populations of Atlantic salmon: North American, European, and Baltic.

Like all salmons, this species likes to undergo long migrations and changes physiologically during a transition in habitat from freshwater rivers, to coastal seas, and back to freshwater rivers.

Overfishing, climate change, and competition from non-native species are the cause for Atlantic Salmon and several subpopulations to become critically endangered (very highly vulnerable to extinction) or even extinct. 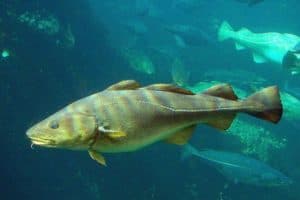 The Atlantic cod (Gadus morhua) is a benthopelagic fish of the family Gadidae. It reaches the lengths of at least 2 m and weights of over  96 kg. This large and predatory species has a white and flaky flesh that is the base of several dishes in North America and Europe.

Because of the advanced fishing method, the Atlantic cod populations decreased further and further, and in the late 1990s, the fishery collapsed. During the collapse, the fishery has shut down significantly, but the species has struggled to rebound.

Scientists agree that the Atlantic cod collapse and its helpless growth has put the species on the endangered list. 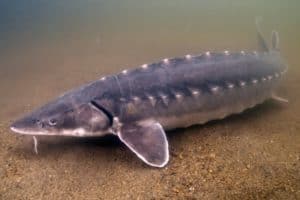 The shortnose sturgeon (Acipenser brevirostrum) is an ancient and long-lived species that inhabits in only 1 river system in Canada – the Saint John River in New Brunswick. The spawning of the fish requires unhindered access to freshwater spawning sites.

These large, slow growing, late maturing fish are under the conservation. However, there is no immediate threat that would lead to a depletion of the numbers in a very short period of time. Pollution from pulp mills, farming and forestry activities along the Saint John River could also bring negative consequences for this species. 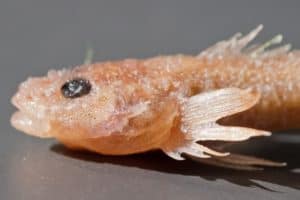 The spoonhead sculpin (Cottus ricei) is a North American freshwater fish of the Cottidae family. It is native to the United States and Canada.  These fish prefer to inhabit in bedrock, boulder, cobble, rubble and logs where they can hide from their predators such as trout and other large lake fishes.

Researchers predict that slight increases in average annual air temperatures could impact on a sculpin species. However, the impact is still unclear, especially for a glacial relict species with a restricted range like spoonhead sculpin. 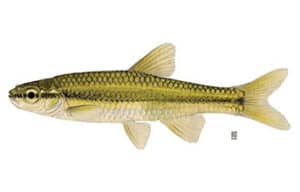 The Pugnose Shiner (Notropis anogenus) is a member of the minnow family (Cyprinidae). The distribution of the Pugnose Shiner ranges from Ontario, south to Illinois and west to North Dakota. The principal threat to this fish is habitat degradation and loss.

Activities that have a deal with the threats include agricultural, industrial and urban development, removal of aquatic vegetation, and changes in water quality/quantity.

Those are 15 Most Endangered Fish Species in the world. Their numbers have decreased due to the overfishing as most of those species are the source of food. Now that you have known some species of fish are unsustainable, try not to buy and eat them. Choose the fishes that are sustainable.