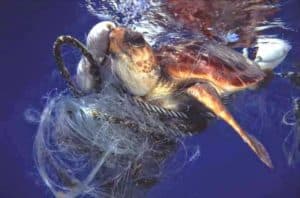 Sea turtles are marine reptiles with a low reproductive rate and high vulnerability to predation. Like many animals on the planet, sea turtles are the victim of human activity on the world’s oceans. Below are 15 Threats to Sea Turtles and what we can do to help them survive.

Sea turtles have very attractive shells that are worth much money. For centuries, people hunt Hawksbill sea turtles for their beautiful gold and brown shells to create jewelry and other luxury items. These turtles are especially threatened in the Indian and Pacific oceans and along the Caribbean Coast.

Studies estimate that hawksbill populations have declined by 90 percent during the past 100 years. The demand for shells still continues until today on the black market, especially in Japan. Bekko (Japanese for hawksbill shell) combs remain an important part of the traditional Japanese wedding dress. Besides the hawksbills, other sea turtles may be hunted for their skin to make leather goods. Beauty products are also illegal if they contain sea turtle oil.

There are some efforts to combat this issue, including improve awareness about illegal shell trade, educating tourists and suppliers, international and regional anti-trade agreements, trade controls within consumer and supplier states, and team working between conservation groups and government agencies. It needs everyone’s hand to help stop taking advantages of these endangered species.

In many coastal communities, especially in Central America and Asia, people hunt the sea turtles to be a source of food. During the nesting season, sea turtle hunters sweep the beaches at night looking for nesting females. They kill the female after she deposited her eggs and then take both the eggs and the meat. In Mexico, thousands of inland residents take a trip to Pacific coastal communities during the week preceding Easter. They are in search of sea turtles and other seafood. During this religious holiday, about 5,000 turtles are consumed in this region alone.

In order to help stop the threat caused by human consumption, governments and conservationists have developed and tested several methods, including education, patrolling nesting beaches, relocating eggs to hatcheries, eco-tourism based on sea turtles, government-imposed limits on consumption.

Sea turtles are often accidentally caught, injured or killed by fishermen. Many of these injuries and deaths occur during the migration through fishing areas. The turtles are attracted to the bait, get caught on the hooks that are meant for catching fish. A long line can stretch for several miles behind boats. When the sea turtles are caught underwater in nets or on lines, they drown if they can’t reach the surface for air. They will run out of air since they are air-breathing reptiles. They can also encounter internal injuries from hooks or external injuries from entanglement.

The solution to this issue is by using Turtle Excluder Devices (TED), two-dimensional net inserts with large escape openings, in shrimp and other trawl net fisheries. When you buy fish from your local grocery store, make sure that they are caught by these turtle-friendly fisheries. Tell your family and friends to purchase seafood from responsible fisheries.

There are more than 100 million marine animals killed each year due to plastic debris in the ocean. About more than 80% of this plastic comes from land that washes out from the beaches and streets. The plastic travels through storm drains into streams and rivers then flows away to the seas. Sea turtles are especially susceptible to the effects of the marine debris due to their bodies’ structure. Once the plastics get trapped in their stomach, it prevents them from properly swallowing food. The harmful decomposition of marine debris inside a turtle’s body will trap the gas and cause the sea turtles to float. The floating leads to starvation or makes them an easy target for predators.

The public can help in this issue by reducing, reusing and recycling plastics, using reusable cloth bags instead of plastic bags when shopping, making sure to properly secure your garbage to prevent any fly-away plastics. It’s not necessary to release balloons into the air. They travel far and will end up in our oceans being consumed by sea turtles since they mistake them for food.

In their natural habitat, sea turtles face some dangers even before they are born. When a mother arrives at the beach to spawn her dozens or hundreds of eggs, terrestrial predators like dogs, raccoons, ants, crabs, seabirds are waiting for them. They wait for the right moment to dig in the sand, pick the eggs up and eat them. Once those surviving sea turtles are born, small turtles are victims of seabirds, large fish, and even other turtles.

After reaching adulthood, sea turtles are relatively immune to predation. However, the occasional shark attack is undeniable. These natural threats are not the number one reason sea turtle populations have dropped to extinction. The predation is part of the natural process that keeps the balance in the ecosystem.

Nesting turtles need a quiet, dark beach on which to nest. Recently, it’s getting hard to find the right place since there are many tourists, businesses and coastal residents which use the sandy beaches. Lights from these developments disrupt the females from nesting. If a female fails to nest after multiple false crawls, she will make use of less appropriate nesting spots or deposit her eggs in the ocean. Lighting near the shore can also cause hatchlings to lose their sense and wander inland, where they often die of dehydration or predation.

Reducing the amount of artificial light that is visible from nesting beaches is the first step to decreasing light pollution that brings influence to the sea turtles. It’s better to use low-pressure sodium-vapor lighting instead of normal lights. The use of Turtle Safe Lighting will emit a very narrow portion of the visible light spectrum, which is less intrusive to nesting sea turtles and hatchlings.

Oil spills from exploration for and transportation of oil and gas pose substantial risks to marine turtles and their habitats. The oil can get in their eyes, on their skin, and in their lungs when they come to the surface to breathe. Among the other marine animals who face the same threat, the sea turtles are more vulnerable to chemical exposure that happens indirectly through the food they eat. The important ways to solve the oil spills is by reducing oil consumption and prefer public transportation or driving energy-efficient vehicles, support renewable energy initiatives, following local codes enforcing fertilizer bans near waterways and buying organically produced food and products.

Sea-level rise causes the loss of nesting and feeding habitats of sea turtles. Since the beaches are beginning to disappear, they can’t return to that same site decades later to repeat their ancient nesting ritual. Although the temperature change that causes the melting of polar ice caps is the reason to this sea level rise, there are some simple steps that can make a difference. We can purchase Energy-Star qualified appliances, replace incandescent light bulbs with energy-efficient fluorescents, reduce, reuse, and recycle all plastic, glass and paper waste, and also use energy efficient transportation.

The oceans are slowly becoming more acidic as the increasing quantities of carbon dioxide (CO₂) ends up to the Earth’s atmosphere. The rise in acidity means that many species will struggle to build and maintain their skeletons or shells. A far more sinister effect is that this acidity can interfere with the growth or reproduction of all ocean creatures. This causes sea turtles feed on the unhealthy food from the unhealthy ocean. We can cut the emissions by supporting investment in alternative energy sources such as wind power and convert the coal-fired power plants to natural gas, which releases half the carbon dioxide per kilowatt generated.

The threats of predation rise up when human involvement reaches nesting beaches. People who leave trash near the shore unwittingly call raccoons and other non-native species to the beaches to find food. Since humans are the one causing this issue, they play the main role in decreasing the threat of invasive species predation. There should be no wildlife feeding from the human. The animals will make a habit of returning to coastal areas to get food. The beach visitor should not leave their dogs and cats unattended. They should not leave any trash, especially garbage containing food.

Coastal armoring structures such as sea walls on or adjacent to nesting beaches can prevent sea turtles to survive.  Sea walls directly reduce the suitable nesting habitat. They block turtles from reaching the upper portion of the beach, causing them to nest in less-than-optimal nesting areas lower on the beach. This makes their nests more susceptible to wave action and more likely to be covered with water. It’s best to build beachfront armoring as a last resort to protect upland structures. The construction of sea walls should be far landward and off the active nesting beach as possible.

Human use of nesting beaches brings negative impacts to nesting turtles, incubating egg clutches and hatchlings. Human presence on the beach is the disturbance to nesting females. There should be no one driving on sea turtle nesting beaches. The visitors need to make sure they fill in any holes they dig while visiting the beach. Any beach chairs, beach umbrellas, boats, or other beach furniture should not be on the beach each evening.

The swimming sea turtles have been the victims of the ships and speedboats that pass by. Plenty of sea turtles get serious injuries in their carapaces (shell) because of the boat collisions. Whenever you’re going with a boat in the ocean, you need to have a marine animal spotter on board to watch the dolphins, manatees and sea turtles that may pass the waterways. Make sure you’re sticking to slow speed and now wake signs.

The cruise ships produce at least 17% of the total emissions of nitrogen oxides, contributing to more than a quarter of total emissions of nitrogen oxides in port cities and coastal areas. It’s best to choose the cruise ship that is ocean-friendly. The green cruise ships have black water treatment system, reduce their 8 tons of waste generated each day, and have environmental officers on every cruise as well as eco-educated staffs.

One way to address coastal erosion is through beach nourishment. Dredging for the sand to nourish a beach is a direct threat to sea turtles and their nearshore marine habitats. Current regulatory policies must change if there is any hope of saving sea turtles. Let there be no building structures right on the beaches. It’s necessary to re-plant native vegetation on dunes to refortify the beach.

Those are 15 Threats to Sea Turtles that you need to know. Since the majority of the threats are from human activities, we have a big responsibility to solve the problem.