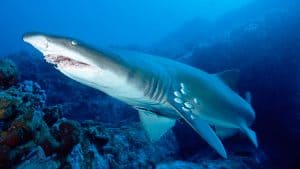 Shark is one of the predators that is feared by human that lives in the ocean.

As a predator and classified as a carnivore maybe not so many people know that they are actually hold an important role to the ecosystem.

Some people may think that the most important role to keep the ecosystem in balance is held by plants.

They might see that these predators can only eat and breed but actually there are so many importance of sharks in the marine ecosystem. And because there are not so many people knowing about this information, in this article I would like to share a little information about on why shark is really important towards the last of marine ecosystem.

1. Maintaining the food chain below it

2. Maintaining the food chain above it

3. Supporting the existence of coral reef

Coral reef holds such an important role in the ocean since there are so many living beings that is relying on coral reefs. Because of this, the destruction to coral reef may create disadvantages to many parties. The importance of coral reefs to the fishing industry is that it support the live of the fish that is important to the economy and industries. Shark maintaining the coral reef ecosystem healthy by feed on sick fish.

4. Supporting the existence of sea grass

There is also the importance of sharks in the marine ecosystem which is to support the existence of sea grass. Sea grass as you know is also holding some role and importance of marine grass such as to produce some food for the living beings in the ocean. Shark indirectly supporting the existence of sea grass and another plants in the ocean biome because after they die their body will be a source of nutrient for the plants.

5. Indicator of a healthy ocean ecosystem

6. Preventing any disease to spread out

Somehow, just like in the land, the disease just so easy to spread out, that is why shark holds a really important role to prevent these things happen.

7. Keeping the existence of marine plants

There are so many kind of plants in the ocean biome. Plants as you know is holding an important role to produce food and also supplying oxygen. As a predator or carnivore, shark has a role to feed on the herbivore. If there is no shark it means the amount of herbivore will increase and the herbivore will feed on plants to much till there will be no plants.

8. Supporting the marine life to exist

Continuing the 7th point, the importance of sharks in the marine ecosystem is to support the marine life to exist. Besides their role to maintain the amount of herbivore in the ocean, even after they die they are still supporting the marine life to exist. Their body will be a source of nutrient after the decomposers of the ocean decomposing their body. These nutrient will be needed by the plants to live and producing foods.

10. Keep the carbon cycle in balance

Another important role from the existence of shark is that it keeps the carbon cycle in balance or in motion. By feeding on the death bodies of fish, shark keep the carbon moving in motion. Somehow carbon is one from many factors that is causing climate of the ocean and or climate change.

This is creating a symbiotic relationship between shark and remora fish. This relationship is supporting the life of remora fish and help the shark to not get sick easily.

Just like what I have mentioned before about the importance of sharks in the marine ecosystem, shark is feed on sick and weak fish. This is means that when the fisherman catch the fish and sell it to the market, they only sell the best quality of fish. And we need to thank shark for this. We surely can’t imagine what will be happened if we are consuming sick fish.

To know on how to fix some problem in the ocean, surely we need to get to know about the living beings of the ocean and the condition there. By studying shark, we can know more than the facts of sharks.

We can also know and understand if a certain population of shark is sick or decreasing in number, we can know the causes. Remember that each living beings has their own role and relationship with the ecosystem.

14. As an indicator of the amount of pollutant

There are some facts about shark that we need to know in order to know the importance of having shark in the ocean. Like for example, one facts of whale shark is that whale shark is a species of shark that is really friendly to human.

Tiger shark is used to eat many things including garbage such as tank garbage. This means that the more tiger shark dies and in their body is found that their body contains heavy mental, there are a lots of metal garbage in the ocean that is polluting the ecosystem.

15. Get to know the problem in the ocean

Animals usually will make a strange movement or different habit than it used to be. These different act coming from the animals may caused by stress that is experienced by the animals or plants in the ocean. Since shark has a huge body, we can easily see and analyze the different act that is shown by the shark itself.

Through its act, we can do more analysis to know on what kind of problem that is disturbing and creates these shark into stress condition.

So those are some importance of sharks in the marine ecosystem that I would like to share you with. Hopefully this information can help you to know more and care more about the ecosystem surround us moreover about the ocean ecosystem. Thank you for keep following our website and reading the articles. Please find another interesting yet informative articles in our website such as importance of marine microbiology.