Whales belong to the order Cetacea, that includes whales, dolphins, and porpoises. There are two suborders of whales: baleen and toothed whales. Baleen whales have a comb-like fringe, called a baleen, on the upper jaw. Baleen functions to filter plankton, as well as small fish and crustaceans. Toothed whales have teeth and prey on fish, squid, other whales and marine mammals.

Whales are mammals. They do have hair, although very little of it, breathe air into lungs and are warm-blooded. They also feed their young milk for certain times. Most of the whale species own a fin on their backs known as a dorsal fin. There is a layer of fat beneath the skin called blubber. The blubber functions as an energy reservoir and insulation.

Whale stock number has been depleted and it can’t be denied that human activities play a significant role in this issue. The hunting of whale for usable products like meat, bones, oil, and blubber has been highly done in the 18th century. This activity is commonly called whaling. Due to the rapid depletion of whale stocks, International Whaling Commission (IWC) banned whaling in 1986. Some of the pro-whaling countries, notably Japan, Norway, and Iceland, wish to lift the ban on certain whale stocks for hunting as they hunt the whale for research purpose. However, the anti-whaling countries and environmental groups insist on saving the whales from the extinction.

Below are the top ten list of Endangered Species of Whale. Starts from the most endangered species with the smallest number of whales left, the following list shows the short details of the species and some threats that have been the issues of the whale depletion. 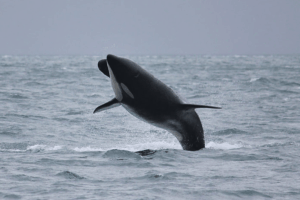 A species to top the list of the endangered species of whale is Southern Resident Killer Whale. It belongs to the killer whale or orca (Orcinus orca), a toothed whale of the oceanic dolphin family. U.S. Fish & Wildlife Service put this species as the only killer whale in endangered list.

These whales inhabit in the North Pacific Ocean, from Washington and Canada to California. Among the other animal population within the Northwest section of North America Pacific Ocean, this creature represents the smallest numbers. The number of whales left is about 79.

Southern residents mostly feed on salmon and a few other fish species. But, they highly prefer Chinook salmon to others salmon species like Chum, Coho, Steelhead, and Sockeye. The loss of their number one prey, Chinook Salmon, has been one of the major threats for this species to be endangered. Noise pollution and chemical contaminant have also been threatening them. Moreover, military activity and ship collision couldn’t be easily set back. People’s activity in fishing can also get them entangled by the fishing gear. 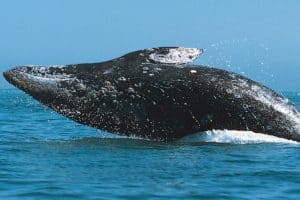 The Western North Pacific only has approximately 100 whales remaining. These baleen whales currently live around Japan and China. Entanglement in fishing gear, noise pollution, and ship strikes have been the major threats for the gray whale to get closer to extinction.

The oil and gas development using the geophysical seismic surveying, pipelaying and drilling operations have been potentially threatening the gray whale existence. The noise and the oil spills may disrupt whales from their natural habitat. 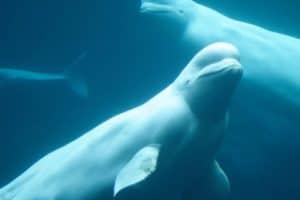 Cook Inlet Beluga Whale’s number is the smallest and the most isolated compared to other belugas of the Alaskan’s stock. Alaska’s native once took the Cook Inlet as the subsistence diet before the population declined rapidly. Unregulated subsistence harvest at a level that this population was unable to sustain has been the reason for the rapid decline.

Although people has suspended the hunting activity since 2005, the effort to recover the population didn’t seem to reach the expectation.

Until this day, the number of cook inlet beluga has declined from 1,300 to 325. The decline has reached nearly 75% since 1979. The threats that keep haunting these population nowadays are habitat disruption, pollution, shipping, oil and gas development, and entanglement in fishing gear. 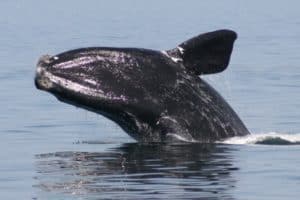 This right whale has a stocky black body, callosities (raised patches of rough skin) in the region, and no dorsal fin. They can live up to 70 years, while some other close-related species may live over 100 years. The adult size is about 15 m, while the calves are about 4.2 m at birth. Females are larger than males and give birth to the first calf at about 10 years old.

Right whales feed by opening their mouth and swimming through the large patch of zooplankton. The right whales currently inhabit around East Coast of North America with 300-500 individuals left.

The threats that haves been haunting these baleen whales are ship strikes, noise pollution and entanglement in fishing gear.

The difference in proportions of several body parts and body colors have been confirmed between the two populations. While the Western North Pacific Gray Whales are critically endangered, the number of North Pacific Gray Whale are larger, that is about 500 individuals found around Okhotsk Sea and Southeastern Bering Sea, Gulf of Alaska Japan, and Hawaii.

Noise pollution, ship collision, and entanglement in fishing gear have been potentially threatening them to decline in number. 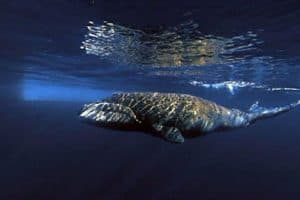 Bowhead Whales spend their entire life in the Arctic and sub-Arctic waters. People hunt them to get blubbers, bones, oil, meat, and baleen. Seem as the Right Whale, they swim slowly and float after death, making it easier to exploit them. Before they were commercially hunted, there were 50,000 of them exist. Now, only about 7,000-10,000 whales are left.

Bowhead whale is one of the longest-living mammals, living for over 200 years. Their diets consist of zooplanktons and crustaceans. They can consume approximately 2 tons of food each day.

Bowhead whale is highly vocal. They use low-frequency (<1000 Hz) sounds to communicate while traveling, socializing and feeding. During the breeding season, they make long, complex and variable sounds to call their mates. 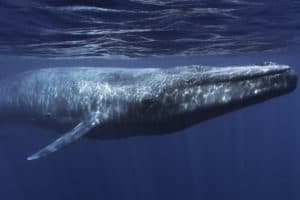 Blue Whale is the largest animal that ever existed on the entire Earth. Their tongue weighs as much of an elephant. They can grow to 29.9 m in length and 173 tons of weight. Their body colors are the shade of bluish-gray or sometimes can seem lighter underneath. Blue Whale are all over oceans except the Arctic Ocean.

Until the beginning of 20th centuries, the Blue Whale were quite plentiful in nearly all the oceans. Before the international community protected them in 1966, people hunted Blue Whale nearly to extinction by the whalers for over a century. 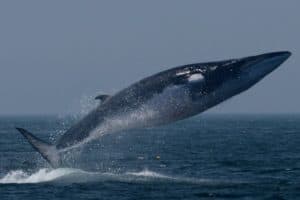 Fin Whale, or also called finback whale, razorback, or common rorqual, is the second-largest animal following the Blue Whale. Long and slender, this Fin Whale body is brownish-gray with the paler underside.

They inhabit worldwide except tropical waters. They feed on small schooling fish, squids and crustaceans. There are currently 10,000-25,000 whales remaining.

Some major threats haunting them down are possible illegal whaling, reduced prey due to overfishing, ship collision, degraded habitat, Iceland’s resumption of whaling and entanglement of fishing gear. 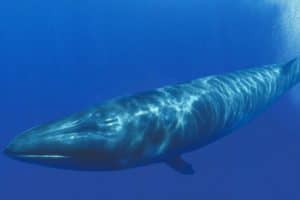 The Sei Whale is one of the fastest whales. Their moving speeds are reaching 30 miles per hour. They inhabit all oceans and adjoining seas excluding polar and tropical regions.

The Sei whale has been a prime target for commercial whaling since the preferred stock of Blue and Fin Whale had been dropped.

Nowadays, although most of the countries have suspended commercial whaling, the species is still prone to “scientific whaling” by Japan.

Other than ship strikes nor other threats, people kill whales intentionally for scientific research. Around 31,000 Sei Whale are left until now. 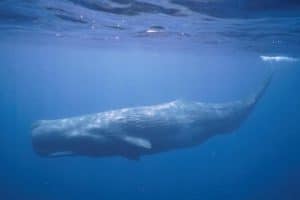 Among the list above, the Sperm Whale is on the bottom where it actually can still be considered as vulnerable instead of endangered. But, it may give an easy reference of how many of these endangered species left compared to the others. They exist in open seas worldwide, with around 360,000 individuals left.

The Sperm Whale is the largest of the toothed whale and predator. They possess the largest brain of any creature known to have lived on Earth. It makes them easily recognized by their massive heads and prominently rounded foreheads.

The whale is a subject for oil and ambergris, a substance that forms around the squid beaks in a whale’s stomach. Ambergris is a valuable substance used in perfumes. Some other threats are chemical pollution, noise pollution, and ship strikes.

The one thing we can learn from these endangered species of whales is that most of the threats have resulted from human activities. Having them abundantly in nature doesn’t mean we can just exploit them as much as we want. Whales are at the top of the food chain and have a major role in the overall health of the marine life. Somehow, every little thing people do today will impact in the future. We all do not wish to inherit the bad nature to the next generation, do we?

Top 5 Animals in The Ocean Biome (#4 is Predator)