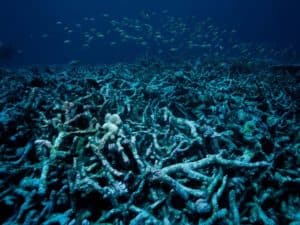 Habitats is a place where living beings live. When the habitat is loss surely we will have to look for a new habitat. And no one guarantee that the new habitat will suit. Habitat is not simply only became a place to live, but also a place to look for food. A habitat affecting the food chain in it. Taking an example of marine habitat of coral reef. Coral reef became a place to live and also a food source for some small fish. This small fish will be eaten by a bigger fish.

Then, the bigger fish will be eaten by shark. Maybe we only see that the coral reef is only affecting the small fish. But there is a further damage that can be caused by the destruction of coral reef. Yes, domino effect to the higher food chain can be disturb or even vanish because we damage the smallest part.

We can’t only blame the human that became the biggest factor of the threats. But we can’t blame the mother nature too because of the natural disasters. Both has subsidize the threats to our marine life. And here in this article I’d like to inform you more about it.

Hurricane, earthquake, tsunami, and storm are some from many natural disasters that can damaging the marine habitat. Let me explain it to you further some of them. When tsunami happened means there is a powerful earthquake beneath the sea. This earthquake is shaking the whole sea and makes something has a new location. Let’s simply put it as earthquake can move an object to another place. Earthquake also can kill the coral reef because the reef it self no longer stick on the sea sand.

Then, this become a threats to marine habitat because the earthquake destroy it. When the tsunami come after the earthquake, many marine animal and plant are carried away to the land, the place that is not their habitat. When the water is receding, most of the marine animal and plant are left in the land. Marine plant such as algae and seaweed that became the producer in the sea are death. And this is how natural disaster could damaging the marine habitat.

Water could absorb the heat up to 30%.  This is bad because the sea and ocean water temperature could change rapidly. The temperature change affecting some marine living beings that can’t stand the heat. They can’t adapt as fast as the temperature change and this could lead them to death. Climate change also blamed for the coral bleaching. Coral only can live in some certain temperature and became one of the sensitive living beings on marine. Almost all coral reef in the world is damaged and in some areas the damage is reach the number of 70%.

Every living beings is different to each other, taking an example of cactus and reef. Cactus habitat is in the dessert, a place where the temperature is high. Besides, reef habitat is in the sea and ocean where the temperature is about medium to low. If we switch their habitat, surely both species will die. This is why climate change could destroy the marine habitat because every habitat surely has the requirements such as pH, temperature and etc to keep the habitat alive.

The direct water pollution also may occur from the ship that sail in the sea. The oil drops may harm the reef because its liquid is thick and sticky. The oil will harming the reef and makes the reef can’t do its activity as usual because its covered by the oil. Air pollution that come from vehicle, factory, fire, and etc basically subsidize a big amount of carbon dioxide that polluting the air.

Overfishing also become the threats to marine habitat. It isn’t only became the threat to the marine animals population but also their habitat. The method that used by the fisherman are so many. Most of them are using the method that is beneficial for them and let them get a big amount of catch. The using of dope that can change the pH sea water is became worse when the fisherman using bomb to catch the fish easier. The problem is that when the bomb destroy the coral reef population, coral reef can’t heal fast.

Offshore mining and high seas mining are both being done in the sea. This industrial activity also can destroy the marine habitat simply because they mine oil and gas in the bowels of the earth in the sea. They build the mining construction complete with the drill to do the mining. Before you build some certain construction of course you will calculate many things such as the slope angle so the foundation will stand strong and last long. When the high seas mining is take place in the coral reef habitat means the constructor has to replace the reef. More over when the slope angle isn’t suit yet with the requirement of building the construction in the sea, we have to flatten the sea bottom.

Because the few past years has become the year where travelling is so viral, many people would visit a new places. For the entrepreneur and businessman this kind of opportunity shouldn’t be missed. So, they invest their money to build some development in the coastal area. The development may include resorts, private beach, and even airports. When they change the mangrove forest for the tourist facility, they have destroyed one habitat. We know that mangrove forest it self has so many function such as preventing the erosion and abrasion, it also became a habitat for some animal. So, by changing the mangrove forest to the tourist facility we exchange many benefit to one benefit only.

Land reclamation is an act of getting a new land. The example of land reclamation is in Pluit, North Jakarta. The government having a new land by adding some sand and other materials to the coastal area to make it a land. This is the other threats to marine habitat since it moving the habitat in the coastal area. When the development of land reclamation getting larger and larger the sea it self will be disturb in the matter of habitat and it could disturb the whole system including the food chain.

Thank you so much for reading this article until the end. Don’t forget to update the latest and newest article about deep ocean with us.  Hopefully this article of threats to marine habitats could inspire you to do more.