Dead Sea has popular name as Salt Sea, and its only one place in the world which has high saltiness and make lot people travel to there because its uniqueness. Whats make Dead Sea unique? Whats exactly Dead Sea has so it can attract so much people to get there? Is there any biological life there beside human? Before we know all of that, lets start it with know where exactly Dead Sea is and what we can see while in there. 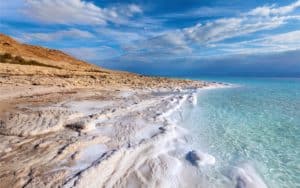 Dead Sea is one salt lake located in the heart of Turkish-African Great Rift between east Jordan and west Israel. From 1960’s, Israel and Jordan already had start an alienation about this sea because it has so much advantage for commercial purposes.

National Oceangraphic and Atmospheric Administration (NOAA) reported if Dead Sea water is five to nine times briny than another sea water, and salinity increases in the deeper water with the depths below 300 feet (100 metres) and its build in the sea floor.

Dead Sea classified as region which has warm temperature, and its because the extremely low elevation and sheltered location. Warm temperature here means every year Dead Sea has 330 sunny days and only has few rainy days in spring or winter. When rainy day occurs at there, it could be the bad one because flood suddenly can suddenly come. Usually there’s warning if theres would be a flood when the rain goes bad. Temperature in Dead Sea can classified into extreme one too. (See also: Ocean Pollution)

Its because Dead sea doesnt have have freezing temperatures; which in  January the temperature usually between 17oC and  in summer, the temperature can extremely hot, which can reach until 34oC in August (highest temperature recorded as 51oC). Winter average temperatures range between 20-23 oC and the region has weaker ultra violet radiation. (see also: Marine Energy)

During the winter, temperatures in the sea is higher than in the land, and its also occur during summer too. Even the weather sounds not really friendly to us, we dont have to worry about get a sunburn while sun bathing! Fresh air is another thing which make people love about Dead Sea. Air in this place is pollen free and polluten free and has lot bromine, and that has good impact for our body;  reducing nervous and muscle tension.

Has length about 50 km, average width 15 km, and become lowest point of the earth (422 m below sea level) make Dead Sea has lot mineral which give lot benefits for human. Since late 1970, southern basin already dried out and only nouthern basin which only  has  water. Even its already dried out, its still can be use for evaporation for Dead Sea water and we can get lot minerals from it. So, what exactly Dead Sea has in the water?

Other Incredible Facts of Dead Sea are its benefits. Phenomenon conditions of Dead Sea which different from another places make it has different minerals and fortunately has another benefits medical for human life too. Its not only minerals, but the atmosphere do the same and thats exactly what make lot tourists come there. (see also: Marine Disasters)

People love this place too because Dead Sea can be a great natural healing, which means people dont need any drugs because it can be natural treatment for some diseases; especially for some skin diseases. Most people who come here has various skin diseases like: Vitalgo, Utopian Dermatitis (Atopic Dermatitis), Archtiozis, acne vulgaris, and some skin cancer in early stage. (see also: Ocean Problems)

Therapy is common treatment for some people for healing some skin diseases. Some studies reported that 76% visitors with psoriasis who came to Dead Sea had a improvement after 23 weeks of treatments. What exactly psoriaris is? Psoriasis is chronic skin diseases which immune system attacks the body, not defends the body anymore.

Its usually occurs between age of 20-30 and 50-60 years old. Very dry skin with itching sensation is common simptom of the psoriasis and it also can be on lips and tounge too. Do you know if its not only Dead Sea water which give us lot advantage? The mud also has lot benefits too! Really? The muds? Yea, the muds also has high minerals too like the water but with another benefits for us. You can check this out here::

Last therapy methode for psoriasis, and this by wraping entire body with mud of Dead Sea. This mud has high minerals can be use for antiseptic properties, which means minerals can help body to penetrate the skin. Futhermore, being covered in mud helps body to purify and cleanse top layer of our skin.

Theres about 26 minerals in Dead Sea water, and theres 12 special minerals which only you can get from here. Highest mineral in dead sea are chloride and bromide and some medical studies has shown us that the minerals can be a treatment for some problems like for acnes, rheumatism, and eczema. Its also can be use for skin treatments too, such as: balancing some chemicals in skin, stimulating blood circulation, and remove toxins from skin. Here’s the list of minerals with their different advantage for our life:

Another benefits we can get from Dead Sea are treatments for reducing allergies, because its has high magnesium and bromide which can reduce some reacton of allergic. Reduce pain in some rheumatologic conditions also another benefit, we just need to soaking in Dead Sea water and it will effectively reducing some arthritic conditions, like rheumatiod arthritis, osteoarthitis, and psoriatic athritis. Dead Sea water also can be use for anti aging solutions too because it can remove wrinkles from our face. (See also: Sea Salt Facts)

Skin easily getting dried because lack of magnesium and phospade. High minerals in Sea Mud also can be solution for this problem because it can increase skin function and hydritating and boost healing process.

Why its called Dead Sea because the salinity is to high? Its the only reason? Yep you right, isnt the only reason why its called as Dead Sea. Theres no life around that place, even for aquatic life, and its because the salinity is to high. Fortunately, we can see some rare species there like some plants, which are: the high cliffs and zygophyluum dumusum. There’s also animals which live in mountains around Dead Sea, like some birds: Brown-necked raven, Black start, and the Tristram’s starling and easily know by the black wings. Theres some mamals who live around there too like: foxes, hyenas, foxes, Jackals, leopard, and spiny golden mouse.

One treatment for psoriasis through exposure to the sun and climate and can be effective whole year. The duration to have get better of this disease depends on the weather and severity levels of the diseases. In the summer, we just need only three hours each day and in around seven hours while in winter. Heliotherapy from dead sea is very useful for our body health. (See also: Effects of Greenhouse)

Most of all, we dont have to worry about sun burn because bromine and another various metals can acts as filter through the sun lights. Sun and oxygen are vital helper of this therapy because can lower stress levels and normalite process of cell division. (See also: Ocean Environment)

Incredible, right? Yea because the uniqueness and lot benefits we can get from Dead Sea its main reason why so many people or even tourist from abroad who can go there whole year. We can reach Dead Sea by private and group tour, which we need around $395 for private tour and around $650 for group tour and can be up to seven peoples. Theres another interesting places too after we visit Dead Sea, which are Masada and Ein Gedi National Park.

Masada is a top mountain to the side of the sea and people usually go there to catch the sun rises through the mountains. And Ein Gedi National Park is park which has various beautiful water hiking traits which allowed us to cool off in the heat. The higher we climb, we will get more peacefuly and quiter place and found our oasis there. So, are you ready to enjoy gift from nature and get lot benefits from it? See you there!

Those are complete explanation about Incredible Facts of Dead Sea.

12 Causes and Effects of Tsunami You Must Know