There are actually lots of people cannot differentiate between edible fish and non edible fish. Somehow when they once see fish they will just see it as food. Actually, we cannot do that because there are several reasons why we cannot eat all species of fish.

For example, maybe the fish is endangered and trying to be conserved. Or maybe the fish contains toxic that is why we cannot consume it. To help you with this I have some information about the types of ocean fish to eat.

The use of salmon in culinary industry may we found easier in Japanese food which is sushi.

Next up we have tuna that has become one of the most famous edible fish. Classified as a saltwater fish, tuna is also still related to mackerel family. One little fun fact about tuna is that it is the only fish species that can maintain its body temperature higher than the temperature of the water or its environment.

One thing that can be done to identified halibut is that you only need to see its body. Halibut is known as a fish that has a flat body, also known as flatfish.

There are two species of halibut which can be found in the North Atlantic and North Pacific Ocean. Comparing this two species of fish what makes it different is that the Pacific Halibut is known as the largest flatfish.

Sardiness is another types of ocean fish to eat that is also well known among the society.

Even though you only know Sardines but actually there are some species of it. Since sardines is classified as a small fish, sardines basically feeds on zooplankton. As one of edible fish, sardiness is usually being sold in a form of instant sardines in the cans.

The existence of cod habitat can be found both in the Atlantic Ocean and Pacific Ocean. Different habitat creates a different characteristics of cod. This species of fish can also be found until 200 m depth. Somehow, cod is not only being hunted because of its flesh. But, there is one more thing from cod that is also popular that is known as cod liver.

Not only classified as a small fish but Anchovies is also classified as oily fish. Even though the size of this species of fish can be classified as small but the existence of it can be found through out the world oceans even most of the population is concentrated in the temperate waters.

Herring is another oily fish that can be found in some areas that has the characteristics of temperate water and shallow area. It feeds on zooplankton as well and another small animals that can be found floating in the ocean water surface.

Not only human but the predators of herring is also including sea birds and marine mammals.

Types of ocean fish to eat that we have next is mackerel. Mackerel can be found in the temperate and tropical waters.

The existence of mackerel can be found in the Atlantic and Pacific Ocean region. Not all region but some region.

This species of fish is feed on zooplankton and their predators is not only human. Its predators are including seabirds and marine mammals.

People used to misunderstanding between mahi – mahi and dolphin. Mahi – mahi has another name that is known as dolphinfish.

Even though its name is having the word of “dolphin”, but actually mahi – mahi is not related to dolphin at all.

One more thing that you need to know about mahi – mahi is that even though it is classified as an edible fish but there are some safety concern on it since it has become the vector of ciguatera poisoning.

See also: Types of Dolphins – Smallest Dolphins in The World 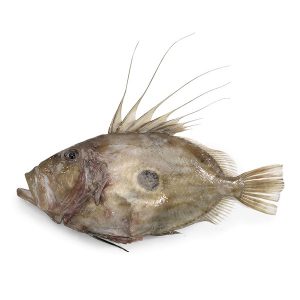 Once you are taking a look at John Dory appearance, you won’t believe that this species of fish is actually edible to eat.

Even though it looks pretty scary for some people but in fact it has become one of the most delicious edible fish.

This fish can be found in the depth of 5 to 360 m beneath the ocean. I think it is quite easy to find it too since it lives solitary.

Just like salmon, turbot is also one species of fish that commonly be found in the Japanese food.

This species of fish is being served fresh where it will be killed right before the people want to cook it.

Classified as a flatfish too but turbot has two eyes that is next to each other unlike any other species of fish.

Black cod is another types of ocean fish to eat besides cod. Even though it is called black cod but it is not related or even classified as cod.

And even this black cod fish is not black at all.

This species of fish also popular in Japan since it is being served as delicacy. Talking about the size, the size of black cod is almost similar to salmon.

You can find this species of fish through out the world’s oceans that has a tropical weather.

Again, even though tuna is commonly being served as sushi but there are also many ways to serve it as food such as by drying it.

The texture of this species of fish itself is medium firm and fine flaked with the color of light pink to deep redish. The size is also quite big because it can reach its weight up to 4.5 kg.

This species of fish is being served as delicacy because it has a firm texture which makes it suits with many seasoning flavors.

weight range of northern red snapper that is being served as delicacy is about 1 – 2.7 kg. Once people make delicacy of this species of fish it will taste delicious and tasty which make many people love to eat it.

Sea bream is the other types of ocean fish to eat. It has another name called as Sparidae and porgies.

There are about 155 different species of this fish. If most fish or animal will be a delicacy by using its flesh but this species of fish will mostly being served as delicacy not the flesh but the head especially the cheeks.

There are two types of sea bass that is known by people as delicacy. The first one is farmed sea bass and the second one is wild sea bass.

Talking abut delicacy, people prefer sea bass will more than the farmed sea bass because it has a stronger flavor.

So those are types of ocean fish to eat that maybe can be a new alternative for you if you were about to try a new variant of fish. Thank you for keep following our website and reading our articles. Hopefully every single article that you read here can help you to know more not only about the deep ocean ecosystems but also the living beings inside it.