Sea lions are sea mammals characterized by external ear flaps, long fore flippers, the ability to walk on all fours, and short, thick hair, big chest, and belly. Together with the fur seals, they comprise the family Otariidae, eared seals. The numbers of sea lions in nature decrease time after time and the efforts to conserve are being put into place. One of the species has been extinct, like Japanese sea lion while some other species belong to the least concern status.

These are 7 Endangered Sea Lions you need to know. The list includes sea lion and fur seal since they are both belong to the family Otariidae. 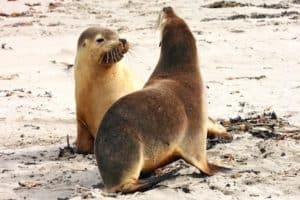 Meanwhile, the smallest numbers live on the west coast of southern Australia and in Western Australia. Some live in Tasmania as well, but there is only a few number of them.

Australian sea lions are very social creatures. While they form a massive colony on the land, they also have sub groups that are more intimate. There is about 10 to 15 individual on each sub group and they can move from one to another as their needs change over the course of their lives.

Male Australian sea lions’ body colors are dark brown and there is a light yellow mane around their heads. The females are silver in color but they don’t have the mane at all. The males are huge and are often up to three times bigger than the females. The species feed on any fish they can find, squid, and other creatures in the waters that contain meat. They swallow small prey and tear larger prey into sizable chunks.

Due to the National Parks and Wildlife Act of 1972, it is illegal to harm or kill an Australian Sea Lion. Although there has been such protection in the habitat, there aren’t more than 10,000 of the species remaining in the world. They become an endangered species and there has to be plenty things to do to help them survive. Under the right conditions, they can live up to 25 years in the wild and even longer in captivity.

The conservationists believe that the numbers are still dropping and the reasons are still unknown. There has been funding put into place to protect of the Australian Sea Lions and to learn the threats that have haunted them to death. The reason that there is only a few number of them is due to early hunting in 18th and 19th centuries. People hunted them for their blubber and oil, for a source of meat, and to make leather goods. There is still a huge problem of them getting injuries or drowning due to fishing net entanglement. 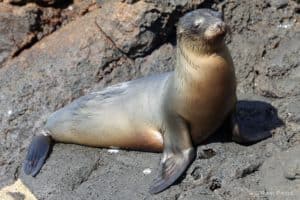 Then, adult males also tend to have a thicker, more robust neck, chest, and shoulders compared to their slender abdomen. Females are somewhat reversing the males, with a longer, more slender neck and thick torso.

Galápagos sea lions can sometimes travel 10 to 15 kilometers from the coast over the span of days to hunt for their prey, mostly sardines. This time is also when they come into contact with their biggest predators: sharks and killer whales. The wounds and scars from attacks are often noticeable. During El Niño events, more green-eyes and myctophids are consumed due to a decrease in sardine population. Human activity may also be a threat to Galapagos sea lion numbers. Domestic dogs transmit diseases to sea lion colonies, causing further population depletion.

There are approximately 50,000 Galapagos Sea Lions remaining. Although so, there has been a very heavy protection to conserve them. The islands where they live has been a very interesting tourist destiny. People offer a great place to watch these animals in their natural habitat. The safety of the Sea Lions stays a priority though. Any visitors that violate the rules can come in contact with the authorities or have to pay fines. 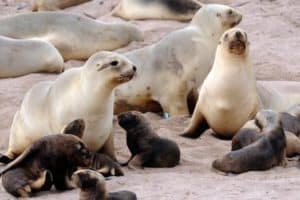 New Zealand sea lion (Phocarctos hookeri), also known as Hooker’s sea lion, is a species of sea lion that primarily breeds on New Zealand. The sea lions live only around the mainland and subantarctic islands of New Zealand, Auckland and Campbell islands and around the coast of New Zealand’s South and Stewart islands. 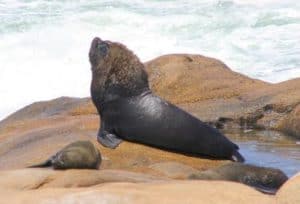 The South American sea lion (Otaria flavescens), is a sea lion found on The Ecuadorian, Peruvian, Chilean, Argentinean, Uruguayan, and Southern Brazilian coasts. The males are approximately 270 cm long and weigh close to 360 pounds. When they are full grown they can weigh twice of the females.  The males have a patch of short hair around their large heads. It’s where the lion’s name starts out to be.

The South American sea lions feed on any types of fish, mainly anchovies, and hake. They also eat squid and octopus. They will hunt within five miles of the shore and will go further if necessary in order to find enough food.

There are approximately 265,000 of them left out there. Many groups work to make sure their natural habitat is protected. Pollution in the water and global warming are some issues to address. These have a disadvantageous effect on the number of South American Sea Lions. Preserving the beaches where they mate is also the main program of such conservation efforts. 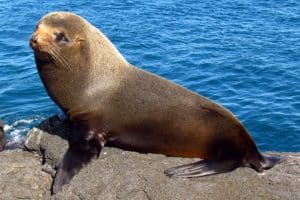 Galapagos fur seal (Arctocephalus galapagoensis) inhabit on the Galápagos Islands in the eastern Pacific, west of mainland Ecuador. They don’t migrate anywhere else, but they do move down the shore to the breeding area that has been built for them. The fur seals spend about 50% of their time in the land and the other half in the water.

Since these fur seals like to get as much sun as possible, they do their feeding at night after the sun sets. The males are somewhat extremely protective of their land territory. They won’t leave it until they absolutely have the urge to search food. They tend to eat fish that are very close to the shore lines.

The numbers of Galapagos Fur Seals left are about 40,000. That was severely reduced in the early 1980’s due to an El Nino. is estimated to be around 15,000 of them today. Back in time, there have been plenty of conservation efforts in place. Many of them involved stopping the use of fishing nets in the areas where they live. That has helped to reduce accidental injury and death of the fur seals. 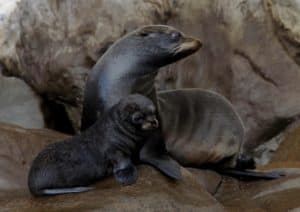 Guadalupe fur seals (Arctocephalus townsendi) breed in the tropical waters of the Southern California or Mexico region. They are dark brown to black in color with adult males having tan or yellow hairs on the back of the mane. Their heads are narrow and flat with a pointed, narrow, and long snout.

The Guadalupe fur seal population is slowly recovering from the extinction threats. The major threats that have haunted them are hunting and entanglement. The conservation group has published the viewing guidelines to protect the fur seals. The government of Mexico has declared the Guadalupe Island as a pinniped sanctuary. National Marine Fisheries Service has classified the U.S. Guadalupe fur seal stock as a strategic stock. 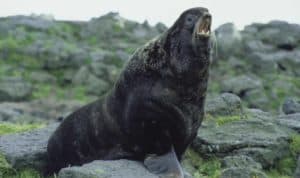 The Northern fur seal (Callorhinus ursinus) live in a wide geographic range throughout the northern Pacific Ocean, Bering Sea, Sea of Okhotsk, and the Sea of Japan. This fur seal has a very short head with a mouth that bents. The species also features a very small nose and very thick fur. The northern fur seals feed on of whatever they find in the water around them.

Some of their selections are commonly Anchovy, Herring, and Pollock. While they are seeking for food, they have to be careful not to become the prey of their natural predators in the water, like the sharks and the killer whales.

Concerns have been around the place since the late 1970’s about the number of Northern Fur Seals out there. As the pup production continuing to drop, the concern about the status of fur seal populations has increased, particularly in the Pribilof Islands, where the of pup production is declining about 6–7% per year. Although the status is currently vulnerable, which is a level below the endangered, the conservation effort must take an assertive step to the increasing the numbers to prevent the rising status.

Those are 7 Endangered Sea Lion and the conservation efforts to help them survive. Keeping the species is not only the conservation groups’ duty. Everyone should aware of any threats that may come from human activities.