Warmer or colder than average ocean temperatures in one part of the world can influence weather. around the globe – boggles the mind, right? So, this is how it works?

These effects are influenced weather patterns across the world from America to Antarctica to Australia.  From the Spanish for a little boy, it’s known as El Nino. The other hand of El Nino cycle is La Nina or little girl. With the in-between phase called neutral. The swing between these phases forms the El Nino Southern Oscillation or ENSO. One of the most important climate drivers in the world.  so is a major influence on Australia’s climate. El Nino and La Nina events can cause natural extreme events such as bushfires, heatwaves, floods, and cyclone.

See also: How to Prevent El Nino – Ways to Protect the Marine Life

As the Earth spins, So do trade winds which stream across the planet driving warm surfaces waters across the vast Pacific Ocean. These sea surface temperatures create predictable patterns of circulation in the atmosphere and ocean climate. scientists gather data from ships, weather stations, ocean robots and satellites to measure the swing between the three phases of ENSO, Neutral,  El Nino, and La Nina.

La Nina a linear event tends to bring above-average rainfall to eastern Australia. During an El Nino event, there is a greater chance of drought and bushfires.  In the other hand, La Nina event lasts about six to twelve months. It takes on average four years to cycle from El Nino to La Nina and back again.

What is La Nina? 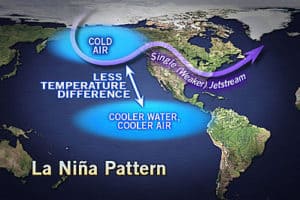 La Niña is a phenomenon that when the surface of the ocean has cooler temperature than normal in the Eastern and Central Pacific Ocean; regions close to the equator off the west coast of South America. In some parts of the world, La Niña causes increased rainfall while in other regions it causes extreme dry conditions.

The conditions that cause La Niña recur every few years and can persist for as long as two years. El Niño occurs every 2-7 years and La Niña events sometimes follow El Niño events. La Niña in the past has also been called as anti-El Niño and El Viejo (the old man in Spanish).

La Nina is a cold water phase of a large climate pattern called El Nino southern oscillation. During normal conditions, trade winds, which blow from east to west, push warm surface. waters towards Asia, piling it up in the western Pacific. In some years though, the trade winds weaken. The warm surface water moves eastward and reduces upwelling of cold water off the coast of South America.

Climatologists call this El Nino.  Its climate impacts show up mostly in the wintertime over North America. The warmer ocean fuels an intensification and southward shift of the jet stream. This brings flooding to the Southern United States and warmer, drier conditions over parts of the Pacific Northwest, northern U.S., and Canada.

See also: Conservation of Coral Reef – Differences between the Ocean and the Sea

However, eventually, those trade winds pick up again and sometimes become even stronger than normal. When that happens, they blow the warm water back into the western Pacific. It restarts the upwelling of cool water towards the surface in the eastern Pacific. These strong trade winds are a signature of what is called La Niña. La Niña can lead to drought in the southern US and cooler temperatures, heavy rains and flooding in the Pacific Northwest.

El Nino and La Nina together are part of a cycle that influences extreme weather and can impact food production, water supply, and even human health not just in the US, but in many parts of the globe.

During the El Nino, the trade winds are weak and it caused the reinforcement of the winds which reverse. This cycle will strengthen the non-El Nino wind cycle. The strengthening of the normal steady winds blowing from east to west below and above the trade winds (equator) will cause the La Nina. ‘

As an outcome, the winds push the warmest waters in the equatorial Pacific further to the western side than normal thereby increasing the pulling up of cold water to the surface towards the eastern direction. Essentially, La Niña is caused by the strengthening of the trade winds with results in pushing of cold surface water to the east and less cold water to the west.

Read: How to Save the Dolphins – Biggest Fish in Amazon

As title above, we will inform you about how many serious effects when La Nina phenomenon occurred, as follows:

La Nina has the opposite condition than El Nino. Hence, this wind will bring drought and dry conditions in the eastern side of the equatorial Pacific as opposed to the western side. This dry condition and droughts are mostly will happen in the coastal regions of Peru and Chile which may result in poor crop yields. Meanwhile,these conditions are experienced because the normal wind cycles that fetch rain are reversed due to the shift of the global wind cycle circulation in the equatorial Pacific.

Besides giving good positive impacts from the numbers of the harvest. La Nina will also bring some negative impacts towards southeast Asia countries which one of them is Indonesia. Along with La Nina, there is a negative dipole mode phenomenon or an anomalous seawater temperature in the western and eastern or southeastern Indian Ocean tropics. This condition will lead to a high rainfall season in Indonesia especially Sumatera and Java.

To look for this new connection, the researchers studied the ability of tornadoes and hail storms to form under certain environmental conditions like variable air temperatures, moisture and wind shear (how winds change at different altitudes). They then looked at when El Nino and La Nina happened.  Meanwhile, what they found is that with the latter comes an atmospheric pattern more favorable to tornadoes and hailstorms, whereas the former does the opposite.

See also: Types of Sea – Causes and Effects of Tsunami

Two natural phenomena, El Nino and la Nina, come and go. These two phenomena can cause damage on earth. As a result of the La Nina Natural Phenomenon, some in the Region in Indonesia will have a high potential for disaster, especially in Java. When the La Nina occur high intensity of rain will occur as well. Generally, the threat of this disaster will be associated with Hydrometeorlogi so aka potential floods, landslides and high winds in some areas.

La Nina is known to have negative effects to the weather patterns of several parts of the world. However, in Peru things are different. The changes in temperatures mean a high fishing season for Peruvian fishermen. The fishermen report increased fish presence along the coast line. This attributed to the fact that the waters are a little warmer, and the winds come along with fish food. This attracts more fish to the surface making it easier for the fishermen to fish different types of fish and in plenty.

In 1997-98 El Nino impacted every continent in the world causing widespread devastation worldwide. This story begins in the eastern Pacific. Trade winds blowing from east to west. Push warm surface waters across the planet. Piling up more water in the western Pacific. Above the ocean, warm air rises driving atmospheric circulation patterns known as Walker circulation. Cold nutrient-rich waters up well in the coastal ocean replacing the warm water pushed away by the. Trade winds become strong and warmer water builds up in the West Pacific.

The excess of warm water increases evaporation and precipitation floods and forming tropical cyclones of the northeastern Australian. This warm water escapes through the gap between Indonesia and Australia to supercharge the Leeuwin current. Like an athlete, the winds can’t keep pumping at this speed forever. Sometimes the winds weaken and warm water sloshes back across the ocean to the East Pacific.

Walker circulation breaks down. Weakening or even reversing the trade winds. Warming of the Eastern Pacific accelerates.  Setting off a feedback loop that keeps most of the rain producing evaporation in the middle of the Pacific.

Finally, those are further information and complete explanation about how much serious effects of La Nina if occurred. It makes a big impact to nature condition, as well as disturb human activities.