Clown fish or also known as anemone fish lives in the anemone. Together, they create such a symbiotic relationship to benefit each other. The anemone will protect the clown fish from the other fish. Besides, the clown fish will eating detritus from the anemone and keep it clean. This fish can grow up to 13 cm long.

There are more than 15000 species of clam in the world. They love to live in the sea floor and they also have various beautiful color. The biggest clam can reach its weight up to 550 pounds or equal with 250 kg with its size up to 1.5 m long. But, most of them only have few inches in size. Clam feeds on plankton and their predators are including sea star, eels, whelks, and human.

This species of octopus has a scientific name of Hapalochlaena lunulata. Its life span is about one and a half year. Even though its life span is short but the blue ring octopus is one of the most venomous octopus. The toxin called as neurotoxin (maculotoxin), this toxin is also enough to kill a human. The octopus will stay behind the reef while waiting their prey during the day.

Jellyfish body is made up of 98% of water. Even if so, the jellyfish has a poisonous tentacle that can kill their prey which is fish. But there are also a jellyfish that can harm even kill a human just like a box jellyfish and Irukandji jelly. The largest jelly fish is the lion’s mane that can reach its body size up to 1 m. Their predators are including turtle and fish.

See also: Types of Jellyfish in The Atlantic Ocean

Even though it looks similar and related to the sea stars but this animal isn’t a fish. They usually live in the sea floor around the coral reef as well and exist in the shallow to the deep area. There are about 2000 species of brittle star in the world. It also has various color and feeds on detritus and plankton.

The other animal in the coral reef is snail. You can find snail everywhere in the both land and sea. Even most of them are small but there is also a giant snail which is the giant africa snail that can reach its weight up to 900 g with its length up to 39 cm. Most of the snail feed on detritus but there are also scavenger and predator. The snail predators are including bird, fish, snake, turtle, beetles, and human.

To live, zooplankton eat another plankton because they are an animal. Most of them are not a single celled animal, but there are also some of them that is a single celled animal such as, foraminifera and radiolarians. Together with phytoplankton, they create plankton that became the first link of marine food chain.

Sea cucumber is classified as nocturnal animal. This animal has a life span about 5 to 10 years long. You can also find them worldwide in the sea floor. The biggest sea cucumber can reach its length up to 2 m and it is the tiger’s tail sea cucumber. They feed on any decaying matter that float both in the water and in the sand. This water animal is a prey to sea turtles, crustaceans, fish, and human.

Just like its name, the sea turtle spends it life the most in the sea. Most of them are carnivore but there is also the herbivore sea turtle just like the green turtle that feed om seaweed and algae. The sea turtle live in the warm and temperate sea in the shallow area. The biggest sea turtle can reach its weight up to 870 kg and length up to 1.9 m.

There are more than 700 species of sea urchin in the world. They usually like to stay in the rocky floor in the shallow to the great depth area. Sea urchin feeds on kelp, decaying matter, algae,  dead fish, and etc. Besides that, their predators are including crabs, sunflower stars, snail, sea otter, some birds, fish, and human.  The biggest sea urchin can reach its body diameter up to 18 cm and it is the red sea urchin (Strongylocentratus franciscanus).

Next animals in the coral reef is shrimp. In the world, there are more than 2000 species of shrimp. Shrimp is omnivore so it will eat both plant and animal. The shrimp predators are including fish, bird, octopus, squid, cuttlefish, and human. To protect their self, shrimp also has a tough exoskeleton. To find shrimp in the sea, you can just straight forward and looking for them in the sea floor.

This sharp usually live in the shallow water in the sea floor, coastline, and reef. The shark may be dangerous because they may attack human and they stay in the swallow water so you have to be careful. Their body length also can reach the number of 3.2 m. Sandtiger shark or sand shark is a nocturnal animal, so they are active during the night and catch their prey at night.

This fish also has another name such as blowfish, fugu, swellfish, and globefish. Puffer is given as a name to this species of fish simply because the fish will puff when it feels threatened. There are about 100 species of pufferfish in the world. And most of them are living in the sub tropical and tropical marine waters.

Even though the fish is cute but this fish is also poisonous. The toxic is exist in many parts of its body and the toxic is called as the tetrodoxin and up to know there is no antidote for this poison. 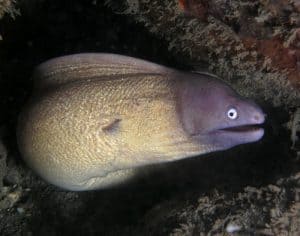 This creepy looking fish loves to hide in the coral reef during the days and shows up in the night to catch its prey. Moray predators are usually come from the same species. They do such a cannibalism to each other. Besides the other and larger moray that feed on moray, human also usually eat moray as delicacy. The biggest moray can be found in the Pacific Ocean and its name is Thyrsoidea macrurus which can reach its length up to 3.5 m long.

In the depth of 5 to 360 m you can find this slow swimmer in the sea floor. The fish that has a scientific name of Zeus faber can reach its length up to 60 cm long and 2.4 kg of weight. To recognize the fish, you can see the black spot in its body side and their color is usually olive green.

There are about 50 different species of sea horse in the world. Sea horse habit in the warm water around the seaweed.  About their size, sea horse can reach its length from the head to tail up to 30 cm long. Because sea horse is classified as a slow swimmer, sea horse using its ability to camouflage in the seaweed to deceive its predator. The Australian sea horse has the best camouflage compare to another sea horse. It is because it can camouflage exactly the same just like the seaweed and make it almost impossible to be seen.

Even though anemone looks like a plant but it’s actually an animal with poisonous tentacle. It live together with the clown fish and creating symbiotic relationship. There are about 100 species of sea anemone and most of them live in the shallow area which is around the coral reef. Sea anemone is carnivore so it feed on fish, worm, zooplankton, and mussel.

So this is the end of today’s article and thank you for reading this article of animals in the coral reef until the end. Don’t forget to keep updating your knowledge about the deep ocean with us. Because, there will be more interesting article that you will regret if you miss it! Hopefully this article is helpful for you to know more and thank you.