Clam is a typical name for several kinds of bivalve mollusks. Clams have two shells in similar size joined by two adductor muscles and have a powerful burrowing foot. Some clams have life cycles of only a year, while at least one can be over 500 years old. All clams have two calcareous shells or valves connected near a hinge with a flexible ligament. Clams are all filter feeders. They feed by straining suspended matter and food particles from water, commonly by passing the water over a specialized filtering structure.

These are 6 Largest Clams in the World that will show you some species of bivalve mollusks that have the largest size. 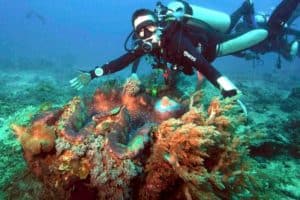 Gigas Clam (Tridacna gigas) or Giant Clam is the largest clam of its genus and the largest bivalve of all. The maximum record of the length 137 cm with 332 kg in weight once full grown. These large, heavy bodied clams are very colorful and attractive. They often become the wonderful ornament in the aquarium.

In the wild, some Giant Clams can be so overgrown. They even resemble with sponges, corals, and algae cause their shape is unrecognizable. These clams have no head, but their soft body consists of a mantle creating an outer wall. This mantle encloses a visceral mass that accommodates the body’s organs. The mantle extends in the form of flaps that are usually very colorful.

Giant Clams live in the eastern Indian Ocean and the west Pacific Ocean, from Thailand and western Australia and eastward to Micronesia. They can also live from the southern islands of Japan to the Great Barrier Reef and New Caledonia. These clams usually found exist on the bottoms, coral rubble, amongst live corals and on limestone bottoms. They prefer reef flats, shallow lagoons and even intertidal spots where they can reveal to the air at low tide.

A Giant Clam is totally non-aggressive as we thought when we watched it on the TV. The truth is, they are so heavy that they have to stay in one place. They can not even completely close their shells when it gets large. Giant clams have thick and smooth shells with 4 to 5 pronounced ribs. A juvenile giant clams may have some sparse scutes, but once they reach adulthood, they lost their scutes. The mantle is usually golden brown, yellow or green. The mantle is decorated with many iridescent blue or green spots, especially around the edges. 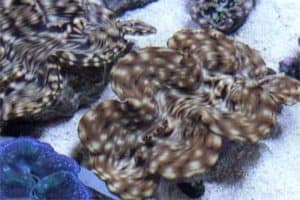 The Fluted Giant Clam or Squamosa Clam (Tridacna squamosa) is an absolute beauty. It most commonly has a warm brown mantle patterned with many golden brown or yellow wavy lines. It is known by the large, leaf-like fluted edges on its shell called ‘scutes’ and a byssal opening that is small compared to those of other members of the family Tridacnidae.

Normal coloration of the mantle varies from browns and purples to greens and yellows arranged in extended linear or spot-like patterns. The fluted giant clam can grow to 40 cm.

The fluted giant clams live in the Red Sea and from the east coast of Africa to the Indo-Pacific, Marshall Islands, and Polynesia, then as far north as southern Japan and south as far as the Great Barrier Reef. Fluted giant clams exist at depths from 0 to 15 m but are most likely found in shallow water, which less than 6 m. They occur in the preserved areas of many different environments.

Giant fluted is a peaceful resident. They do not harm other organisms, in the wild or otherwise. Although they have an ability to shut completely, the anemones, triggerfish, and puffers may be predators in a domestic environment. Giant fluted clam is sometimes kept in an aquarium, where it needs a moderate amount of care. 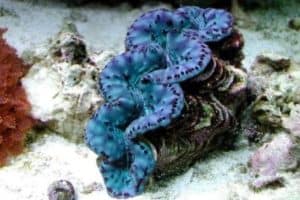 These function to protect the clam from the effects of intense sunlight or bundle light to enhance the algae’s photosynthesis. The clams produce the color white in their mantle by clustering red, blue and green cells. The shells of large specimens are typically not exceeding 20 cm in length.

The small giant clam attaches itself to rocks or dead coral and siphons water through its body, filtering it for phytoplankton, as well as extracting oxygen with its gills. Starting life as a tiny fertilized egg, the small giant clam hatches within 12 hours. Then, they become a free-swimming larva. This larva then develops into another, more developed, larva which is able to do its own filter-feeding. At the third larval stage, a foot grows, letting the larva to swim and rest on the substrate.

The small giant clams inhabit on the tops or slopes of the reef in shallow and clear waters. They are most commonly living together in the much shallower waters in great congregations. However in the deeper waters, over 8 m, they are found solitary. 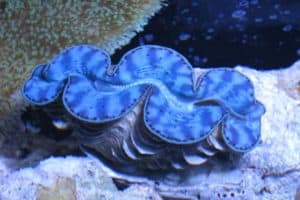 Southern giant clam (Tridacna derasa), smooth giant clam, or Derasa clam, is a one of the largest of the giant clams, that can reach up to 60 cm in length. These clams usually have a mantle with a striped pattern of wavy lines or a spotted pattern.

These clams have muscles for opening and closing its shell and a foot for connecting to reef substrate. The clams breathe through gills and feed through a mouth. Most clams fulfill their nutrition by filter feeding and absorbing dissolved organic compounds from the water. The small giant clam often live alone, but they can be found in groups as well. In protected areas, such as on the Great Barrier Reef in Australia, they exist in densities of up to 30 clams to a hectare. Predators are small parasitic pyramidellid snails that drill into their tissue and feed on their bodily fluids.

When Tridacna clams first attain sexual maturity, they are male. But, about a year later they become hermaphrodites, meaning they possess both male and female reproductive organs. Nevertheless, the production of sperm and eggs are separate in order to prevent self-fertilization, even though self-fertilization can occur. 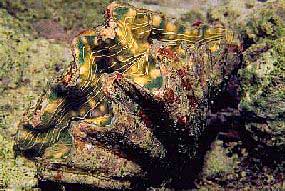 The bear paw clam (Hippopus hippopus), horse’s hoof clam, strawberry clam, or Hippopus clams is a species of large saltwater clam, a tropical marine bivalve mollusk in the family Tridacnidae. The bear paw clam may not have a super flashy mantle, but among the giant clams, it wins for the most beautiful shell.

The mantle on most specimens is typically a dull green or brown to gray with faint cream markings, but the shell has a frilled shape and can be colorful. The shell is usually a grayish white with fabulous markings of various colors.

As the bear paw clams grow, they lose their byssal gland and rely merely on their size and weight to hold their place. Because of this, adults are usually found lose on reef flats, grassy areas of reef flats, sandy substrate, slightly muddy substrate, gravel or coral rubble while the juveniles use their byssal gland to stay lightly attached to the harder surfaces until they are over 14 cm. 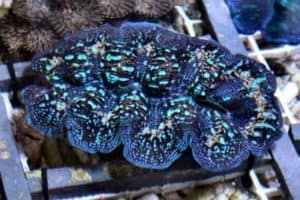 The boring clam (Tridacna crocea), crocus clam, crocea clam or saffron-coloured clam is a species of bivalve in the family Cardiidae. The boring clam is native to the Indo-Pacific region. It sometimes makes their way to the aquarium trade where people often refer them to ‘crocea’.

The boring clam is the smallest clam in the subfamily Tridacninae. This clam grows to a maximum shell size of 15 cm. It has two, thick valves attached together by a hinge which is typically between a third and less than a half of the width of the shell.

The color of the valves is typically greyish-white, sometimes with a hint of pink-orange, yellow or orange color. This coloration can form a band near the top margin, especially on the interior surface. The mantle, the soft body wall which covers the internal organs, extends from between the valves when they are open and is brightly colored.

Boring clams usually live in the shallow areas near the shore or on the uppermost areas of the reef. They have been found at depths of 0 to 20 m. However, they tend to be more numerous at shallower depths. These clams refer to the boring clam because, with the contraction and relaxation of their byssal muscles, they bore into boulders and coral heads.

Those are 6 Largest Clams in the World that you need to know. Those clams are the beauty of the ocean that needs our protection to survive.