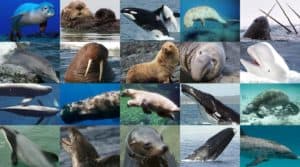 We never realize that everything that we thought is beneficial could lead us into some problem. Taking an example, we throw a plastic bag into the sea, maybe it just one small plastic bag but maybe it could kill a sea turtle who think that the plastic bag is a jellyfish, its food.

Then, we will never know that either the turtle is pregnant and we kill the turtle and its babies or not. There are a lot of things that became a serious threat to animals.

And in this article I would like to inform you about some threats to marine mammals. All of the treats are done by humans without we realize it before.

The using of trawl has been banned by the government in almost all country in the world. The using of trawl is not only could make the big fish being catch but also the small fish that not even ready to be consumed by human because of its age and size. Luckily this action is already being banned, if it isn’t then all population of marine animals will be extinct. And not often you will find shark babies inside the trawl that has been brought by the fisherman. This means that this kind of action could decreasing the population of marine mammals.

Thus, the fisherman doesn’t give a chance for the marine mammals’s babies to grow up and live. Not only that, in some cases the trawl is down to the sea, and no one take it back to the ship. This trawl that has been left in the sea could make some marine mammals babies trapped in it and could not release its own self. Days by days, nights by nights and until the marine mammals that trapped in the trawl death because of hunger.

Besides, the gas could pollute the air and became a toxic for marine mammals, because they will show up to the sea water surface and inhale the air to keep them alive. If the polluted air could make a lung cancer to human, I believe the same bad impact could be happened to the marine mammals. And if this still happens, we can hurt more marine mammals and lead them to their own grave.

In some cases, this things also may caused the death of the marine mammals because the ship hit them too hard. The severe injuries that couldn’t be heal in a short period of time kill these marine mammals. Or even though it could be heal, the injured marine mammals will be a prey for another predator because they are less strong than before.

The reason why marine mammals could hit the ship and get injured is because of the acoustic pollution. We know that marine mammals like shark, dolphin, and whale are suing radar or navigation to know what is in front of them. Their navigation also has the same function as the airplane navigation that lead the plane from one place to another place. The increasing level of ship in the sea and also the technology development for ship by using drilling rigs, radar, sonar, and navigation are disturbing these marine mammals navigation. Thus, they can’t navigate a place or an object clearly, they will usually get hit by the ship.

Habitat lost is not only caused by the natural disaster, but also human error. Human act of polluting the air through their vehicle, or the factory smoke could increase the carbon dioxide in the air and caused the global warming in ocean and because of the effects of greenhouse, carbon dioxide is trapped on earth and may caused the ice at the poles melt. Not all of the marine mammals has the high ability to adapt with their new habitat after their old habitat is lost. When they couldn’t adapt with the new habitat, it isn’t possible that they could die. The lost of their habitat means they are also lost of their common food. And this could leads them to death.

The other habitat loss may caused by the fisherman who catch the fish using a bomb. The using of bomb kill the fish and coral reef. Some species of fish that live in the coral reef are prey to marine mammals. It means, when there’s a fisheries that destroy one habitat it could increasing the change of marine mammals to death. And the thing that you should know is that the habitat lost became the biggest factor that is responsible to the marine mammals death.

When you go to the zoo you will see many animals is trained and do some action to amuse you. Even though it is fun but this kind of entertainment became the threats to marine mammals. Why so? Because they live the life that is not their real life, which is in the wild. Taking an example of dolphin that you usually meet in the zoo. In the wild dolphins live together in a group but in the zoo or captivity they only live up to three individual in a group. Their life span in the captivity are also shorter compare to the wildlife. Because in the wildlife their life is free but in the captivity their life is depends on the trainee.

The first thing that you’ll look up when you visit somewhere new of course the uniqueness from that place. Such as, food, recreation place, and souvenirs. Our tourism activity can be dangerous for the marine mammals when we eat and buy some products made from marine mammals. Maybe you will be served whale meat or shark meat as the menu.

When you want to go back home, you will look for some souvenirs to be brought home. In some area, the local inhabitant is made souvenirs from shark teeth, tugs, bone, an etc. You have to be a smart tourist, when no more people buy such things, surely the local inhabitants will stop the haunting and trying to think another thing that could produce them money.

The people in China believe that eating cat meat could make their body warmer during the winter. In some area, people also believed that eating snake meat could increase their stamina. The same thing also believed that shark meat could increase the stamina. This kind of believed of some wild animals make the demand of culinary based on their meat is high. Moreover, many people are so challenged when they hear a new and strange menu that they’ve never tasted before.

Do you know that seal in the pole using the ice as a place to hide from the orcas? If the climate change, and the world become hotter than before and the ice melt, surely the population of seal will be decreasing so significant. Besides the predation, the hotter temperature make them suffer and this could lead them to death.

Mining activity also disturbing their navigation because the noisy mining. Besides that, when the high seas mining is leak, the oil could pollute and kill many living beings in the sea.

Because of the sea is wider than the land, then no wonder that many people is relied on the sea to collect some amount of money. That’s why, no wonder that many floating house and market around the sea and river in some places. The existence of floating house and market is blocking the sunlight to enter to sea. Besides, the sea plants need the sunlight to do photosynthesis to produce food for its own self and another water animal.

When we can’t find trash can around the coast or sea, we simply throw the trash everywhere. Don’t you know that this might be dangerous for marine mammals especially whales? Littering the sea by plastic trash and another small synthesis trash can kill the whales, since the trash can enter the respiratory hole in the whale head.

Back again, all the damage in our planet is caused by our own self. Because we are too greedy and we only think about the short term benefit that we could get. I know that they are only animal, and not more that but please threat them well because they are also became our food, and we have to appreciate their sacrificial. So this is the end of today’s article of threats to marine mammals. Hopefully this article could inspire you more to save the environment. Thank you for keep reading this article until the end which means you do really concern about our marine mammals. And do not forget to keep updating the information of ocean with us!