Home » Creatures » Marine Biota Along With the Definition, Benefits and Images

Marine Biota Along With the Definition, Benefits and Images

The earth consists of oceans and land, where the ocean is the largest part of the earth which is about 2/3 of the earth. The sea is a habitat for various kinds of organisms that have evolved and adapted to their environmental conditions. All types of living things that exist in the sea, both animals, plants, and corals are referred to as marine biota.

Throughout the oceans, the types of organisms or marine biota are not evenly distributed. Characteristics of diverse marine environments cause the creation of different habitats and influence the types of organisms that inhabit them. The characteristics of the ocean include light availability, water depth, and the complexity of the sea topography. 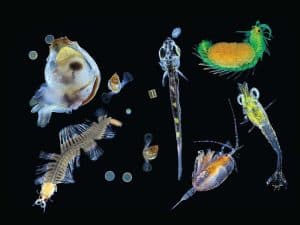 Plankton is a type of microscopic organism that lives in the upper or surface (pelagic zone) of the ocean, sea, or other waters. The name Plankton derived from the Greek which means wanderer. In general, Plankton has a small size that is less than 1 mm or about 0.000039 inches.

But there are also types of plankton that have a large size, for example, jellyfish that have a width and length of tentacles reaching up to 15 meters.

Plankton comes from the remains of plants and marine animals. This organism has been considered as a food source for large organisms that live in waters such as fish, shellfish, coral, and whales. Although it is classified as a living organism, plankton does not have the power to fight currents, tides, or the winds that wash it away. Seacoast is a good habitat for the development of plankton, where coastal areas contain mineral salts and sunlight which are good for plankton.

Based on its nature, plankton is classified into 3 types, that is :

Phytoplankton is a microscopic organism that lives in the euphotic zone (dim surface) of the sea that is able to synthesize its own food in the form of organic material that is processed from inorganic materials with the help of sunlight. Besides being able to produce food for themselves, phytoplankton is also a provider of energy for almost all life in the sea. The name phytoplankton comes from the Greek phyton which means plants and plankton which means wanderers.

Types of phytoplankton include:

Cyanobacteria or commonly called blue algae. It belongs to a type of bacteria and is the first organism on earth that was developed through photosynthesis. He is also one of the organisms capable of taking and processing nitrogen from the air into organic molecules which can later be utilized by plants and animals.

Diatoms are protists, a type of algae that has a single cell with a protective cell wall made of silica. This is the most abundant type of phytoplankton. In favorable conditions, diatoms can reproduce rapidly so that their presence is able to dominate an area of ​​water. But if conditions are not favorable, such as the occurrence of winter or when the source of nutrients decreases, these organisms can sink to a lower level until the current returns them back to the surface.

Even though both Dinoflagellata and diatoms belong to protists, but they have different physical properties. Dinoflagellata has a motion device in the form of a vibrating whip (flagellum) in which there are receptor cells that are used as sensory devices to determine the state of the environment and as a tool to capture food.

This type of phytoplankton plays a role in the emergence of red tide symptoms which are events in which the sea waters appear to be reddened. This condition was caused by the explosion of the population of the dinoflagellates which could result in the mass death of other marine residents due to poisoning.

Based on its life cycle, zooplankton can be divided into 2 groups, that is:

Meroplankton (temporary plankton) which spends part of its life as plankton, especially at the larval level.

Holoplankton (fixed plankton) which spends its entire life as plankton.

Whereas when viewed from its size, zooplankton is divided into 4 groups, that is:

Organisms belonging to zooplankton include:

Bacterioplankton is a group of bacteria that during their lifetime worked to decipher the remains of other organisms. Just like phytoplankton, bacterioplankton is also capable of carrying out photosynthesis itself. This species can be found in almost all parts or levels of the sea, not only in surface areas such as other plankton species.

Bacterioplankton describes the remains of other organisms so that their nutrients can be used again and become a food source for zooplankton. These types of bacterioplankton include phytoplankton, fungi, and other fungal organisms that are significant in the nutrient cycle.

Based on its size, plankton is classified into several types, that is:

Plankton can be found in all territorial waters on this earth, both in the ocean, sea, lake, and other types of waters. The variability of this species depends on several factors, such as: 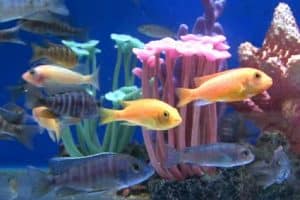 Nekton is a type of organism that becomes an active swimmer in the waters, both freshwater and seawater. Nekton is often known as the top predator in most food chains in the sea. The word nekton comes from Greek which means swimming. Underlying the difference between nekton and plankton is that nekton has the ability to swim without having to rely on ocean currents. Nekton can be found in almost all regions and latitudes of marine waters. Fish are the largest nekton group, which is around 16,000 species. Nekton forms the basis of fisheries which is quite important on this earth.

Where nekton is a plankton predator that has various benefits for human life, such as improving nutrition and improving the economy. The carcasses of organisms belonging to nekton that accumulate on the seabed are the basic ingredients for the formation of marine minerals such as oil and gas.

In general, nekton has several characteristics, such as:

The first nekton classification is based on fish groups, nekton can be divided into 2 types, that is:

That is a group of fish that spend part of their lives in the epicenter of the sea, namely the area or sea zone which has a depth of 0 to 200 meters or about 656 feet. This group has a diversity of lifestyles such as:

Groups of organisms that spend adult time in epipelagic regions but are separated in coastal areas such as benign latitudes, commotion, haring.

Organisms that enter the epiphanic region only at certain times such as lantern fish groups that only appear on the surface at night to look for food.

Groups of organisms that spend their adult years in other regions, but they spend the beginning of their life cycle in the epicagic zone.

That is a group of aquatic organisms that spend all their lives in the epicenter zone. Some of the species included in this group include hammerhead shark, mackerel shark, blue whale shark, tuna, flying fish, sawfish, setuthuk, lemuru, rowing fish, and so on.

Nekton is also classified according to its class, such as:

Benthos is a type of organism that lives in the benthic zone, which is on the sea floor. Benthos is an organism that is abundantly sedimented on the surface of the continental shelf and in deeper waters. Because light cannot penetrate the benthic region, the organisms that live in the environment get energy from organic matter that descends from the higher zone. Or it can be said that the food chain of benthic organisms is supported by dead or decaying objects that float from the higher zones.

The main sources of food for benthic organisms are algae and organic runoff from the soil. Several factors such as temperature, salinity, water depth, and the types of local substrate that are very influential on the development of these benthic organisms.

Some types of organisms including benthos include protozoa, sponge, Coelenterate, Rotifera, Nematode, Bryozoa, Decapoda, Ostracoda, Cladocera, Copepoda, Pelecypoda, Gastropoda, Insecta, and Leeches. Other benthic organisms, such as starfish, oysters, clams, sea cucumbers, brittle stars, and sea anemones, have important roles, which is as a food source for fish and also for humans.

The roles of benthos organisms include:

Based on its size, benthos can be divided into 3 types, that is:

Macrobenthos consists of various types of benthic organisms that have a size greater than 1 mm so that the organism can still be seen by the eye. Examples of macrobenthos organisms include polychaete worms, bivalves, echinoderms, sea anemones, corals, sponges, lobsters, and cetaceans.

Consists of benthic organisms that have a small size that is less than 1 mm, but larger than 0.1 mm. These species belonging to meiobenthos are nematodes, foraminiferans, water bears, copepods and ostracodes.

Consists of benthic organisms that are less than 0.1 mm in size. Examples of microbenthos organisms include bacteria, diatoms, ciliates, amoeba, and flagellates.

While based on the type, benthos can be divided into:

From the description above, we can know that there are so many types of marine biota where their presence plays a role in human life. However, now various problems are threatening the preservation of the marine biota, namely mass extinction. This occurs due to several factors such as a combination of high temperatures, acidification, and lack of oxygen.

Studies have shown that climate change and fishing that occur in an uncontrolled manner are also factors that cause the extinction of marine life. Then what are our efforts to keep marine biota sustainable?

Hopefully, the explanation of this article is useful. Also, read other articles about biology:

13 Effects of Sewage in The Sea

Specific Definition on Hydrosphere Phenomenon along with Examples