Home » Creatures » Galapagos Islands: The Characteristics and The Facts

Nature always charms its endless beauty, from the sea bottom to the top of the highest mountains, from the coast to the unreachable hinterland of jungles. Every place in the world has its own uniqueness and it may not be found in another place. So no wonder if the creatures that live in that place become endemic species there. Let’s say Snake Island or Ilha da Queimada in Brazil that becomes one of the most dangerous island in the world.

Talking about island, it will always related with archipelago. Archipelago is a group of islands that form a cluster of islands. Indonesia, Philippines, and Fiji are the examples of archipelago. One more archipelago which is very well known in the world is Galapagos Islands as it is inhabited by animals those are not found in another countries. Maybe, some of us haven’t heard the name of Galapagos at all or never know about it in detail. So, let’s find out Galapagos Islands.

The Characteristics of Galapagos Islands 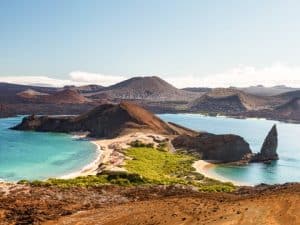 Galapagos Islands consists of at least 13 stony and fiery islands. It stretches on Pacific Ocean around 1.000 km west side from South America coast. In detail, Galapagos consists of 18 big islands from the total of 19 islands. Galapagos islands is 8.010 km² wide and the highest point is on Wolf volcano which is 1.707 m.

In term of law, Galapagos islands is the part of Ecuador. One of its island is around 4 millions years old while the young islands keep growing. As mentioned above, Galapagos has active volcano. Due to that volcano, Galapagos Islands was categorized as dangerous country in 2007 – 2010.

A researcher, Charles Darwin, said that the natural selection happened in Galapagos so that only certain animals that survive in this islands. Those animals are Galapagos giant tortoise and iguana. Galapagos is divided into 2 by equator. And the equator is on the north side of Galapagos, exactly on Isabela Island. Even though Galapagos is an archipelago with the most active volcano, it is occupied by 10.000 to 25.000 human population that grows every year.

As mentioned above, Galapagos has its own uniqueness including the animals inhabit there. These are the facts we can only find in Galapagos: 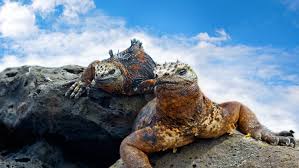 If Indonesia has Komodo, a giant lizard in East Nusa Tenggara, Galapagos has an ancient reptile which is known as Iguana. Different from Iguana in common, Iguanas in Galapagos are divided into 2 kinds of Iguana, those are land Iguana and sea Iguana. Land Iguana is averagely 3 – 5 meters length and around 25 pounds weight. Land Iguanas are mostly found in South Plaza Island doing sunbath or eating fruits. South Plaza Island is also inhabited by sea lions, dogs, and cows. While the flora we can find there is mostly cactus.

Based on its name, most of Sea Iguanas are found soaking in the sea. Beside that, Sea Iguanas may also swim to 9 meters depth and eat the food in the sea. Sea Iguana can be found in Humedales which has stony contour. 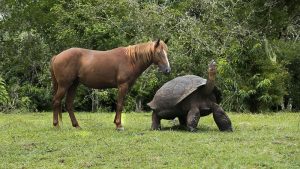 It is not only Iguana, we may also find giant tortoise in Galapagos Islands. There is even a place for conservation that specially handle tortoise. It is exactly located in Puerto Ayora and it is the research area of Charles Darwin. Nowadays, this place becomes research region and conservation for giant tortoise.

When tourists visit this place, they will be shown baby turtles those are being incubated in an incubator or to see the adult turtles. We should know that Galapagos giant tortoises are endangered animals in the world. Even in this place, there are only 11 tortoises left. The oldest tortoise is Lonesome George which has been there since 1972.

3. History of Galapagos Islands can be found in Interpretation Center in San Cristobal

Here we can find a lot of interesting information related with Galapagos history. Based on the information in Interpretation Center, there is the oldest island in Galapagos Islands which is 4 millions years old. That’s not all, it is also explained about the islands from the ocean, special climate, the sea wave, and species inhabit in Galapagos. 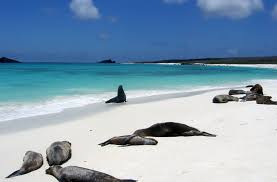 In fact, we may find penguins as well in Galapagos. We all know that most of penguin live in cold climates places. However, Galapagos penguins can live in the hot climate area or under the equator.

Galapagos penguin is the species of penguin with small body and mostly found in cold area island in Galapagos. But this kind of penguin has been threatened to be extinct due to El Nino storm.

Galapagos Islands has a unique climate which is medium temperature in the land. While the sea temperature is cold enough due to the encounter between Antarctica Ocean and Pacific Ocean. So that Galapagos consists of 80% land bird, 30% plants, 97% reptile and mammals. While sea endemic is 20%.

That’s all the information about Galapagos. Hopefully it will be useful for us.