Home » Creatures » General Classification of Jellyfish that You Should Know

Jellyfish in the classification of organisms belong to the kingdom of Animalia. They are sea animals that look beautiful, but sometimes can cause harm through the sting which can cause itching, convulsions, and poisoning. However, most of these jellyfish have more benefits than the disadvantages. They play role as a primary consumer in maintaining the balance of the marine ecosystem, can establish a food chain and food chain pyramid. This is a way to maintain the balance of the marine ecosystem and the preservation of marine life.

In addition, some types are used as processed food ingredients and as traditional medicines in several countries such as China, Taiwan, Japan, and Thailand. This jellyfish belongs to the Scyphozoan class or better known as true jellyfish. This is to distinguish other jellyfish in other classes such as Ctenophore (comb jellyfish) and Cubozoa (box jellyfish).

Jellyfish, or Scyphozoan based on Animalia classification, are included in Cnidarian phylum which means animals that have sting needles. The group of Cnidarian phyla is divided into several classes, namely Cubozoa, Hydrozoa, Anthozoa, Staurozoa, and Scyphozoan. The characteristics of jellyfish include: 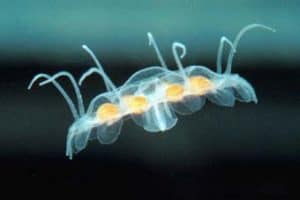 It is also known as Crown Jellyfish and has seven families in it. This type has a distinguishing feature with other jellyfish which is the presence of deep grooves along the cover/umbrella or bowl, so as to form like a crown in accordance with the popular term. This type usually lives in the deep ocean.

This type is capable of producing and producing light called bioluminescence. When these jellyfish are touched, they will produce light, and will again appear transparent when not disturbed. When this jellyfish is attacked, this type can surprise and distract its predator with the light produced. This type can also use its light to attract prey and then dazzle and catch it. The examples of the species are Nausithoe Aurea and Atolla Wyvillei. 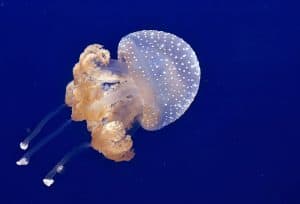 It is included in the sub-division of Discomedusae. The characteristic of this type of jellyfish is not having tentacles and other structures. Instead, this type has eight branched arms. This is different from other types which only have four arms. So generally these types of jellyfish have never been reported to have stings.

It is widely used as consumption of human food both as processed food and used as traditional medicine. This type has 10 families divided into two sub-groups. The examples of this species are Phyllorhiza Punctate, Cassiopea Andromeda, Catostylus Mosaic, Spotted Jelly or Golden Medusae Mastigias Papua, Rhizostoma pulmo, Canonball Jellyfish, and Stomolophus Meleagris.

Rhizostoma Pulmo species are commonly found in English waters, with diameters reaching 40 to 90 cm, and are generally used as processed food. Golden Medusae M. Papua is found its habitat in the Indo-Pacific. It generally has one single mouth and several small mouths on the surface of its arms, eating zooplankton. Cassiopea Andromeda species generally live in tidal sand or mud, shallow lagoons, around types of coral reefs, and around mangrove plantations. These species are often mistaken for marine anemones. They are carnivores, because they eat other smaller marine biota using nematocytes on their tentacles. 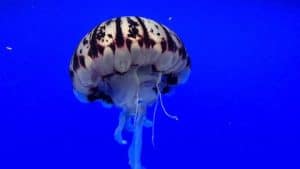 Semaeostomeae, which literally means the mouth of a flag, is among the largest types of orders. This type of jellyfish is commonly known to the public. The characteristics of this type are they have four oral tentacles (long tentacles attached to the mouth), the gastrovascular digestive system consists of four unbranched pockets that protrude from the middle abdomen. It does not have a canal ring. This type also has eight tentacles, 4 in radicals and 4 in inter-radical; these tentacles also have stinging cells.

For the Ulmaridae order, a well-known species is Aurelia Aurita or better known as moon jellyfish. These species generally live in colonies, measuring 25 – 40 cm, unable to move freely. Their movements tend to follow the flow. They are predators for small size medusae, types of plankton and molluscs. For the order of Cyaneidae, the species that is widely known is Cyanea Capillata or better known as Lion ‘s mane jellyfish, giant jellyfish, or hair jellyfish. This species is the largest type of jellyfish with an average size of umbrella diameter reaching 2 meters and generally living in cold areas. They are predators that prey on fish, and jellyfish that are smaller in size. The Pelagiidae order has a commonly known species, Chrysaora Achlyos or known as black jellyfish. This type can be found in the waters of the Pacific Ocean, Bay of Monteray, and waters of Mexico to Columbia.

Here you had already understood the types of jellyfish and their benefit for human life. Hopefully it can give you more insight about this marine animals.

Shocking Facts on How Plastics Can End Up in The Ocean

Respiratory System in Marine Fish Along with the Explanation