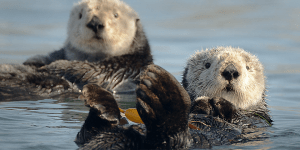 Sea otter is one of many animals that live in the coast of eastern and northern North Pacific Ocean. This marine mammal can grow and reach its weight up to 45 kg for the adults.

Even though sea otter can walk in the land, but it spends its time mostly in the water. It can swim and dive up to the sea floor to find its prey such as sea urchin, molluscs, crustaceans, and some species of fish.

Because of its smart brain, sea otter uses its hand and take a rock to dislodge the invertebrate animal from its shell before the sea otter eats it. The existence of sea otter is helping the ecosystem to be balance. A high number population of sea urchin can be reduce and reach its normal number of population because sea otter feeds on it. The impact if the number of sea urchin is high is affecting the kelp forest ecosystem and even can destroy it. Sadly, sea otters nowadays are being hunted for their fur.

Their fur is being hunted because sea otter has the most thick and densest coat fur. And today, I would like to share you with about some threats to sea otter that is threatening this small marine mammal.

Meanhwhile, not only Sea otter, Threats also attack other species like Threats to Marine Mammals until Threats to Marine Life.Then, for knowing what types of threat to sea otter that actually happened, here the information for you, as follows:

Because of the activity in the sea will never ends because many people rely their life on it as a fisherman, it means that the chance of oil spills will also be there. Because oil is made for machine and not for living beings, then when sea otter accidentally eat something that is covered by oil, then surely it will die soon.

What is bad from ship activities in the sea is that the desire of the fisherman that want to go to the open ocean as soon and as fast as possible. And to be in the open ocean as soon as possible, they will just increase the speed of the ship to its maximum. There are so many cases of marine mammals that die or even injured because the fisherman drive its ship too fast and they don’t see the existence of marine mammals in front of their ship.

The amount of Overfishing in the Ocean also rise up recently. Not only fisherman, but there are also a lot of people who like to collect such an antique and unique things. Such as, product made from the sea otter’s fur coat. Because there is a demand for the fur, means there are also people who will work to fulfill the demand for money. And this is ended up as an illegal hunting. Therefore, we must know first the Solutions to Stop Overfishing.

Threats to Marine Habitats is likely to be concerning point in this era. Another threats to sea otter that you can see is the habitat destruction. Habitat destruction may takes many form. Such as, when a human wants to build a house near the coast because he or she is a fisherman. For sure, these people will destroy the habitat of the sea otter.

Sedimentation is the accumulation of many kind of material that can change a certain habitat. And there will be no exception if sedimentation covered up the sea otter’s habitat. By time time goes by, sedimentation will become more solid and hard to remove. This is also become the threat for the existence of sea otters. (See also: Ocean Sediments)

You must know that we are not allowed to litter in the sea and we are not supposed to do it as well. Because there are so many product using plastic as its packaging, the existence of plastic will harm the sea otter as well. Littering in the sea more over if it is plastic will also cover the sea otter’s habitat. What is so bad is that plastic can last for hundred of years. So it will stay and polluting the habitat.

There are so many countries that has a natural diversity. Many of them also using the nature to attract tourist for their money. To attract the tourist, surely the government or local entrepreneur will do such a coastal development to develop the facility that they have. Some of them are ignoring the fact that there are so many animals including sea otter that is being force to go from their own habitat because of this.

When you go to a recreation place such as safari park you will see a lot of animals doing many kind of attractions. The attractions surely having an aim to entertain the visitor. As long as the animal is threaten well then that will be okay but there are also still exist some people who is catching sea otter for entertainment purpose but can’t taking a good care of it so it dies faster than it used to be. This is also become the threats to sea otter.

Ocean Pollution as well as Air pollution may have many form. Usually in the coastal area, the pollution may come from the ship’s chimney, factory, and etc. If the pollution still happening, this will affecting the respiratory health of sea otter.

Many people who comes to the beach will do a sun bathing, surfing, or even swimming. All of them mostly will use sunblock to minimalize the effect of sunlight that can burn their skin. The lotion will polluting the water because it will decay from your skin. Therefore, we need to know how to keep Prevention of Marine Pollution

Farmer usually using pesticide to keep their plants healthy from pests. Pesticide given by the farmer to the plats and also the soil can be brought by the rain to the sea. And somehow you can see it as another type of water pollution toward the sea water which can affecting the live of sea otter when the number of pesticide is too high.

Landslide may happen because the existence of tree in the mountain or hill is not enough to hold the soil. And so by then, the soil will slide to the sea. And when the soil is sliding to the sea it can both destroy the sea otter’s habitat and killing them.

We can’t denied that the lack of attention towards sea otter is also become the threats to sea otter. Many people may see that sea otter is just a small animal and it even can breed twice a year which means it is not so important to protect this species. (See also: Marine Protected Areas)

Just like humans, animals also can get affected by some disease. The disease may come from the environment surround the animals that is not healthy and it affected the animal’s health. Some of the disease even can killing them including the sea otter.

Because there are so many factors that changing the environment where the sea otter lives, those factor such as pollution will also affecting the nutrition needed by sea otter. This is because pollution become a toxic substance that can poisoning the sea otter’s body.

And unbalance ecosystem will also affecting the population of sea otter. Where their prey has a lower number than them then in the end they will surely die.

Somehow, government and several private institution only care the most to some big species of animal and forgetting about the other animal.

Last one, as the threats to sea otter is the existence of animal testing for several purpose that can also declining their number. It also become big impact to marine animals ecosystem. This kind of activity can decrease the amount of animals, as well as destruct the sustainability of marine habitat.

So, this is the end of today’s article of threats to sea otter. Hopefully through this article you can increase your awareness toward another living beings and also its ecosystem. Remember that from a little things that we do, it can create a big impact toward the others.

17 Endangered Whale Species in the World