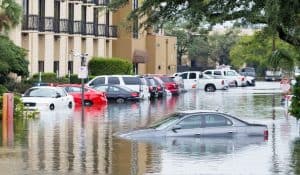 Water is one of the natural components that very important and needed by all living things. Without water, living organisms cannot survive. Even so, water is so important for human, where there are many utilizations of water in human life.  So, the existence of water in this planet Earth becomes the most important component and also as a reason why planet Earth is a most habitable planet. The amount of water in the planet Earth is estimated to be around 70% and this amount doesn’t only found in seas or oceans but also in some water sources such as rivers, lakes or swamps. Water in this planet Earth also can be in the other forms or shapes such as ice, snow, vapor, rain, dew and others. All the water forms become parts of a process which is called hydrological cycle.

An example of flood types is flash flood. Flash flood is caused by high rainfall in lower land. So, the water in the area has reached saturated point so it can’t be absorbed. The outcome is water beneath the ground will discharge and comes suddenly in short period of time, but the resulting losses are too many. Flood also can be cause by effect of sea level rise.

One of the hydrological natural disaster forms is landslide. Although landslide can be caused by other factors, landslide is mainly caused by high rainfall. Landslide usually occurs in highland, especially in slope of hill or mountain and at the same time, heavy rain is occurring. If the rain continues to occurs, land around the slope will become soft and crushed by rainwater runoff. The outcome is land is no longer able to withstand the rainwater plus there is influence of gravitational force, then it will go down and becomes landslide.

One of the notable natural disasters that has to be watched out for countries around confluence of Earth’s plates is tsunami. Tsunami caused by there is a plate motion of Earth plates that located in seabed. The result of the plates motion is earthquake that makes the sea water above it move along the motion till the water motion reaches land. Earthquake is one of the causes of tsunami. The event had occurred in Aceh on December 24, 2004 and claimed thousands of lives. Not only earthquake, evidently tsunami also caused by volcanic eruption just like in the Sunda Strait on December 22, 2018. At that time, Anak Krakatau mountain was erupting and some parts of the mountain landslide into the sea, so created wave till it became tsunami whent it reached land.

Different from flood, puddle caused by the existence of blockage or problems in drainage channel. So, in the rainy season or high rainfall, rainwater can’t be streamed well through the existing channels. Since the ability to penetrate through small gaps or cracks is one of the properties of water. It makes stagnant water in some areas such as roads or even can reach residence area. Another difference between puddle and flood is puddle recedes faster or less than 24 hours, if more than that, it can be a sign that flood will take place. Besides that, height of puddle is no more than 40 cm, but it is enough to disturb all kind of activities, especially for urban residents.

If the lake water is saturated by carbon dioxide gas, plus there is earthquake, volcanic activity or explosion makes the saturated water moves up. In the surface, the pressure is too low and can’t hold the carbon dioxide gas so there are some bubbles in the lake surface, simultaneously the carbon dioxide gas explode. Limnic eruption had occurred in Lake Monoun, Cameroon on August 15, 1984 and at least there were 37 lives lost. In another place, in Lake Nyos, Cameroon on August 21, 1986, limnic eruption occurred that created 25 meters tsunami. The lake water turned out to red in color and carbon dioxide gas spread to some villages around the lake. The result was around 3,500 livestocks dead and 1,700 lives was lost to the disaster.

Those are 5 examples of hydrological natural disasters that you must know. Hopefully this information is useful for you.