17 Plants in The Ocean Biome

Plants support our live because it also became one and also the first source of food for all living beings. Chlorophyll inside the plant help plant to produce its food. Where, this kind of ability of producing its won food is only owned by plant. There is no other living beings that can produce their own food. The use of plant is not only became a source food but also being use to make medicine.

The existence of plant occur in two places which are land and ocean. For the plant that is lives in the ocean, it also has some amount of nutrient that is good for our health compare to the land plant. Here, I’d like to share you with about some plants in the ocean biome to let you know more about it. 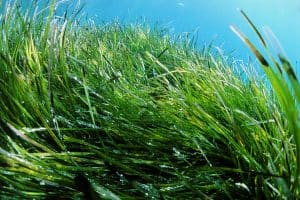 Neptune grass is one species from many kind of sea grass that exist in the ocean. Mostly, neptune grass will be found in the Atlantic Ocean. This grass is also can live and grow until 35 m depth. Its leave can grow up to 1.5 m long. And its color is green and it will turn to brown when it is getting older. What is unique about the plant is that it has two type of rhizome.

One type of it is burned inside the sand, and the other one grows above the sand. When the area where neptune grass is grows is being poluted, means this plant will die because it only can live in a clean area where it has nutrient to support its life.

Is classified as a brown algae. And there are about 30 different species of kelp in the world. A population of kelp create an underwater forest where the kelp it self can grows until 80 m long. And because of that, the kelp it self is classified as a high growth rate plant. Besides that, kelp also can be a mark for a certain place that has high nutrient because it won’t grow in a dirty and low nutrient place. 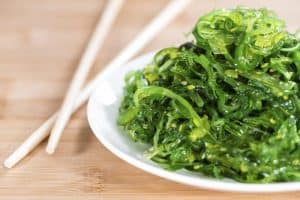 Sea weed is unique because it is also classified as algae. But, what makes it unique is that it doesn’t belong to a certain algae (e.g., red algae, brown algae). This plant is also so easy to be farmed, many people plant it because it has so many function. It is been used in food industry, medicine, and another things.

Many people farmed this ocean plant because it is so easy to grow. All you need is either salf water or brackish and sunlight. Because it has such an easy treatment and lots of benefits many people love to farmed and consumed it.

Phytoplankton is also known as micro algae. This is because its size is smaller than algae. Because it is small and you can’t see it by eyes, you can do something to know the existence of it. When you go to the beach at night and put and move your hand in the water, you’ll start to see that the water is glowwing. This glowwing is coming up from the phytoplankton. 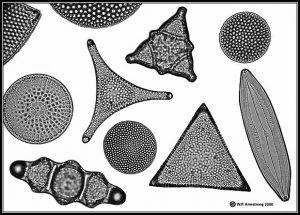 Diatom is also classified as algae. Even though they live in a group actually, they are a unicelluler organism. There are about 100.000 different species of diatom all around the world. Diatom is also so important for the last of marine life because they support about 45% of organic material that will be a food for another marine living beings.

It is also so important to know the water condition of an area. That’s why, diatom also became an organism to study. Another unique thing about diatom is that its cell wall is made from silica.

Dinoflagellate habitat is spread out through out the ocean and fresh water. Their existece is being affected by some factors such as depth, salinity, and temperature. So as long as those factor suit them, they can live in any kind of water habitat. Comparing dinoflagellates to diatoms, the dinoflagellates group is still smaller than diatoms. 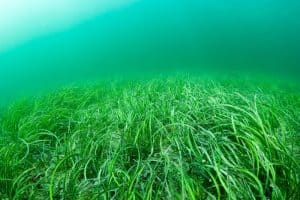 Sea grass is classified as a flowering plant. Where it has about 60 species of it. This plant is also known as the ocean engineer. It is because it can create its own habitat. Its leave can slowing down the ocean water current, its rhizome can stabilize seabed.

The existence of sea grass also provide a new home for many marine living beings. It also became an important thing to make a water ecosystem better. Not only that, it also help us to prevent coastal erotion. Nowadays, people also using sea grass as a craft. Such as mattress, bandanes, and etc. 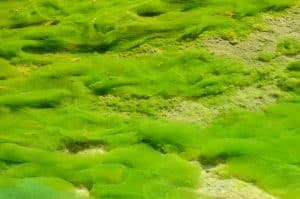 About algae reproduction, it can do both asexual and sexual reproduction. Symbiotic relationship is also exist between algae and some other living being such as lichens, coral reef, and sea sponges. The benefit that algae will get is in a form of protection from the host. And the host will get its energy from algae in form of food. 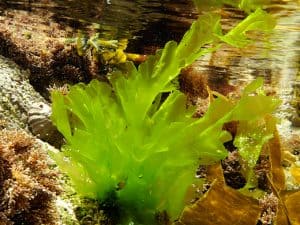 This plant is edible and classified as a green algae. Sea lettuce became a food for some marine animals such as manatee and sea slugs. Because it contains fiber in a high number and also protein, mineral, vitamins, and iron people also consuming sea lettuce and usually they make it as salad and soup, but there are also some people who consume it raw.

Even though sea lettuce live and grow in the salt water, but it is an easy thing to plant and grow sea lettuce in refugium because its treatment is easy.

Just like its name, this species of sea grass is a food for manatee. Even though it became an important food for manatee there are also another marine animal that feed on this species of sea grass such as parrot fish, sea urchin, pin fish, and surgeon fish. This plant can exist until 20 m depth beneath the sea but there are also some species that can live and grow in the deeper depth.

Usually you will find this plant in the muddy bottom area. Manatee grass can only grow in the salt water, it can’t grow in the brackish area.

Still a family of algae, coraline algae is classified as red algae. Coraline algae also play an important role in the coral reef ecosystem because it became a food for some marine animal such as some species of mollusks, sea urchin, and parrot fish. Its color is not always red, but it also can have another color such as purple, yellow, blue, white, and gray green.

Marsh grass can be found along the river and lake that have the stream towards the ocean. This plant will grow above the water surface and its rhizome will be beneath the water. An ability that is owned by this plant which is marsh grass is that it can survive in a muddy area that has a low oxygen level.

Beside what i explained before, here other plants in the ocean biome which still exist in their habitats, as follows:

Sea cabbage can be found along the coast of Europe. This plant can reach its length up to 75 cm and its wide up to 60 cm. This plant is named as sea cabbage because it is still relative to land cabbage. And for sure, this plant is edible and people usually cultivate it as a vegetable.

To find marine eelgrass should be an easy job because it will live in the sandy area and usually a part of it will float in the water surface. There are about 15 different species of marine eelgrass that has been identified. Its leave width is about 1 cm and its color is bright green.

This plant can be found until the depth of 17 m beneath the sea. Its distribution can be found in the Indo – Pacific region. Sandy bottom, coral reef, and rocks are the place where it loves to live and stay. Sickle leaved cymodocea is a food for sea horse.

Also classified as a flowering plant, wire weed has a scientific name of Sargassum muticum or people also know it as Japanese wire weed. The growth level of this species of wire weed is high because it can grow up to 10 cm in a day. It can be found until the depth of 10 m around the solid substrate.

Its scientific name is Vallisneria spiralis. Tape grass is easy to be found in the sub tropical and tropical area. This plant loves sun light very much to help them grow. It can grow up to 1 m long with various kind of color starts from pale green to reddish. Because of its easy treatment, this plant is also used to beautify the aquarium.

Finally, that is our article for today about plants in ocean biome and some of its uses. Thank you for reading this article until the end. And, do not forget to keep following our website because there will be more interesting article for you to read.