The wealth of Indonesia’s marine resources, biodiversity, and the types of natural resources in it are abundant. Seaweed is one of the most diverse marine species in Indonesia. The species richness of seaweed does not only play a role in maintaining the balance of the ecosystem but its benefits can be taken. The benefits of seaweed are very diverse, including: used as a raw material for the cooking industry, the cosmetics industry, the construction industry, pharmacy, and health and medicine industry. For this reason, many communities, especially coastal communities, have cultivated various types of seaweed.

Seaweed plants are a part of macro algae, which has no true roots, leaves, and stems (Thallophytic). There is thallus which replaces root function in plants as nutrient absorbers. The process of photosynthesis in plants also occurs in seaweed because it has chlorophyll and occurs in the thallus (autotroph). 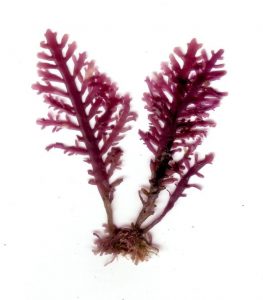 This type of seaweed is a species of Rhodophyta (red seaweed). The red color of seaweed is caused by the pigments of phycoerythrin. Gelidium Sp. has a length of approximately 20 cm and a width of 1.5 mm. The thallus is red, brown, green-brown, or blonde.

Its reproductive organs are macroscopic in size. This type of seaweed has a variety of colors; this is related to the function of sunlight for seaweed plants where there is a small amount of light intensity affects color. In Indonesia, there are 8 species of this type of seaweed.

There is the center for Gelidium Sp. Seaweed cultivation on the coast of the Thousand Islands, Riau Islands, Lombok, Sulawesi, Maluku, and Papua. Various types of Gelidium Sp. are used as raw material for domestic agar mill and as an export commodity. The content of gelatin ranges from 12-48%, depending on the type. 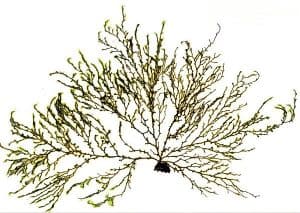 This type of seaweed belongs to Rhodophyta (red seaweed) species. Just like other types of grass, G. Verrucosa has a formation that resembles the roots, stems, leaves, or fruit called thallus. Generally, the tip of the thallus G. Verrucosa is tapered with a smooth surface but seems grainy.

The diameter of the thallus G. Verrucosa ranges from 0.5 – 4.0 mm. This type of seaweed in its natural habitat inhabits an area of ​​300 – 1000 m from the coastline. G. Verrucosa along with euryhaline have the ability to be able to live in maternity waters 15 – 30 ppt. The growth of G. Verrucosa is known to be better in a shallow place that has a higher light intensity than inside.

The optimum temperature for growth is 20 – 28˚C and the optimum pH is between 6 – 9. In addition, the substrate attached to G. Verrucosa is in the form of stone, sand, and mud. The general description of seaweed is macrobenthic (large and attached), autotrophic organisms, and requiring light for its survival, so the seaweed cannot live in the depths of the sea that have no light.

This type of seaweed belongs to Rhodophyta (red seaweed) species. The thallus is cylindrical; the branching of the thallus is pointed and overgrown, in the form of soft thorns. The body surface is slippery, dark brown, brown green, yellow green, or purple red.

This color variation is related to the chromatic adaptability of this type of seaweed which depends on the intensity of sunlight received. The height of the E. Spinosum can reach 30 cm and the branching of the first and second thallus grows to form a lush clump with special characteristics leading to the arrival of sunlight, some of which are elongated and some are curved.

Eucheuma Spinosum grows in clear waters, sandy or muddy waters, and lives attached to various types of coral reefs. Other living conditions are currents. Generally, around the seaweed, there will be many types of plankton. For Indonesia, it is still being cultivated on a large scale in the Madura and Bali regions. The E. Spinosum seaweed is one of the potential export commodities to be developed. E. Spinosum seaweed is taken by carrageenan which has high economic value.

This type of seaweed belongs to Rhodophyta (red seaweed) species. E. Cottonii can be distinguished from its thallus where the thallus branches branch cylindrical or flat, the branches are irregular and rough (so, it is a circle) because it is overgrown by nodule or spine to protect gametes.

The tip is pointed or blunt purple or yellow green. The spine of Eucheuma Cottonii irregularly covers its thallus and its branches. The surface is slippery, cartilaginous, green, yellow green, gray, or red. The appearance of the thallus varies from simple to complex.

The habitat of E. Cottonii is in the tidal area, average coral reef, attached to a hard substrate. Seaweed growth is strongly influenced by two factors, namely internal factors and external factors. Internal factors that influence include type, strain, part of thallus, and age. While the external factors that influence include physical and chemical conditions of the water. The centers of this type of seaweed cultivation are in Central Sulawesi, South Sulawesi, East Nusa Tenggara, Bali, East Java, Southeast Sulawesi, and West Nusa Tenggara. E. Cottonii is taken by its chemical content, carrageenan, and used in the cosmetics, food, and medicine industries.

Acanthopora Sp. belongs to Rhodophyta (red seaweed) species. Cylindrical thallus, free, upright branching, there are short spikes around the thallus which are characteristic of this type. It has dark brown or yellowish brown body, and heavy clumps with branching in all directions. It grows on rock substrates or other hard substrates such as some types of coral reefs and can be epiphytic. A. Spicifera produces alanine and aspartic acid.

This type of seaweed is still mildly cultivated in Indonesia and is usually used as a snack and processed food.

It grows generally in the outer end of the coral reef which is always submerged in water, attached to the rock substrate and coral reefs with small disk holdfast. The red horn type of C. Hornemannii produces chemical products such as asparagine and carrageenan, and is used as a base for jelly and cosmetics.

Hypnea Sp. belongs to Rhodophyta (red seaweed) species. The typical characteristic of this type of seaweed is having a straight, branched thallus, brown or greenish depending on the intensity of sunlight and the depth of the place to grow.

Throughout the thallus, there are fine hairs. Just like other types of red seaweed, Hypnea Sp. is utilized as raw material for various industries. The breeding of this type of seaweed in its cultivation is usually propagated by artificial vegetative use thallus cuttings. 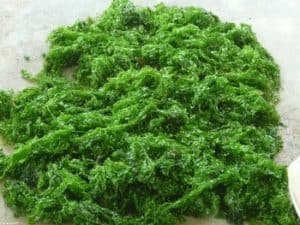 Ulva Sp. or sea lettuce is a seaweed belonging to the Chlorophyte (green seaweed) division, because the cells contain chlorophyll.

The habitat is in seawater and the morphology is a thin and flat thallus like a sword consisting of 2 layers of cells. There is no differentiation of tissue and all cells have more or less identical forms, except for basal cells that experience elongation to form the attaching rhizoid. Each cell in this species consists of a nucleus, with cup-shaped chloroplasts, and a pirenoid.

Ulva Lactuca has a length of up to 100 cm and is bright apple green and strap-shaped blades with smooth but wavy edges. The center of each strand is often pale and increasingly towards the edges the color gets darker. In the tropics, this plant is usually found in shallow water (the upper intertidal zone to a depth of 10 meters).

On the right substrate, it often associates with areas that have high nutrients (for example, mangroves) or near freshwater sources. This species has a bright green blade, brittle, wrinkled, oval or round, a blade diameter of 65 cm long, and lives in an intertidal zone or in a shallow area. This kind of seaweed cultivation center is in the Gunung Kidul area, Baron Beach, Yogyakarta.

Sargassum Sp. is seaweed belonging to the division of Phaeophyceae (brown seaweed). This species can grow up to 12 meters long. Its body is yellowish-brown in color.

Characteristics generally have the shape of a cylindrical thallus or flat, slippery, round main stem rather rough and holdfast (the part used to stick) in the form of a disc. Lush branches resemble trees on land. The shape of the leaf widens, oval, or like a sword. It has a generally solitary bladder. The color of the thallus is generally brown.

The first branch arises at the base of about 1 cm from holdfast. Branching alternates regularly, the shape is an oval and elongated leaf measuring (40 × 10) mm. The ridges are sparse, wavy, and curved or tapered. Vesicles (bubbles like fruit) are oval-shaped, tapered tip measuring (7 × 1.5) mm, and slightly flattened.

This type of seaweed can grow on coral substrates in choppy areas. Sargassum Sp. has long been used as food and medicine. As a nutritional source, seaweed contains carbohydrates (sugar or vegetable-gum). Carbohydrates stored are mostly available in the form of laminar (glucose polysaccharide formed from photosynthesis), accompanied by starch in a certain amount depending on the species.

The cell wall is made of cellulose and acidic protein alginate where the largest content is alginate which is alginic acid. Sargassum Sp. grows in protected and large waves in rock habitats. The need for sunlight is higher because there is more chlorophyll content in Sargassum Sp.

Turbinaria Sp. is seaweed belonging to the division of Phaeophyceae (brown seaweed). The characteristic of this type of seaweed is the thallus structure is rather hard or stiff, its phyloid or blade resembles a turbine or like a funnel on its jagged side, the center of the blade is curved inward, and there is an air bag in the phyloid section.

There are many lateral branches that resemble ordinary leaves called phoid. Receptacle has an operculum with colorless elongated feathers that functions as a regulator of gamete release. Living on rhizoid corals, examples of Turbinaria ornate species will appear to spread on the surface of the reef in the intertidal zone. It can live in small groups or exist in groups that are very wide spread. Most are yellowish brown to dark brown with dark brown spots.

The Reason Why the Sea Looks Bluish and Greenish