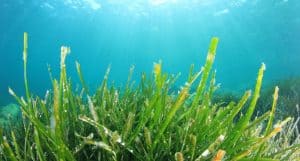 Seaweed is the other name of algae. It is not plant like as seagrass. Some of us think seaweed is a plant, because it produces food and energy for others like a plant.

Besides that, seaweed has a chlorophyll too like a plant. There are many different characteristic of seaweeds than other marine plants.

Before we discuss about the importance of seaweed in marine ecosystem, we have to know the definition of seaweed. Seaweed is marine algae like a short definintion before. But in the long definition completely, seaweed is macroalgae that refers to several species of multicellular and macroscopic.

Seaweed is an important species or important organism on the earth. Seaweed produces all what we need for life. Such as foods, energys, pharmaceuticals, habitats, oxygens, and others. Seaweed is base importance of marine food chain, it is producer and it build ecosystem too.

Seaweed has a chlorophyll to do photosynthesis in the ocean. It is autotroph species, It produce energy and food for it shelf. Seaweed provide food for other marine animal. Especially for herbivore animal that only eat herb like as algae, seagrass, and other marine plant. Therefore, the existence of seaweed in marine ecosystem has an important function.

Seaweed is a sensitve organism in the ocean. Agricultural waste, industrial waste, aquacultural waste, household waste and others enter the ocean at every time. They bring  a lot of material like as nutrient into the ocean. If the nutrient balance in the ocean is disturbed then the population of seaweed will increase. We call the situation as blooming algae.

Blooming algae is bioindicator of marine chemical damage. The situation occurs due to nutrient unbalance. Waste increase some nutrient then spur seaweed growth causing seaweed to bloom in the ocean. Some effects of chemical spills in the ocean that we know from seaweed as bioindicator

The function of seaweed is so important. It is a base of food chain and it provide habitat for other marine life. The lost of seaweed will damage ecosystem balance. Maybe unbalance situation in the ocean causing extinction for other marine species. There are many threats to ocean ecosystems.

Seaweed in this situation has an important action for protecting marine life. It will absorb an excess nutrients so that will make marine ecosystem safe.

The waste from land into ocean has a negative impact for marine life. The contents of waste are heavy metal, such as iron, calcium, pottasium, mercury, mangant, chrom, selenium and other. They are dangerous nutrient in the ocean.

Waste enter the ocean can kill all marine life. Besides that, waste can evolve marine species to another species if waste can not kill them. Like a point before, seaweed can trap waste and process the  waste to another form. It will help marine life and it will make marine ecosystem safe.

Seaweed as important species in marine ecosystem has a function to send danger signals to others. The function of seaweed as trapper of waste and iron ion make seaweed can make their shelf representative of pathogen. Alga bloom is one of danger singnal to other. It means that has a disease and can endanger other marine life.

Some pathogen in seaweed change seaweed color or smell. That is very dangerous. Fortunately, seaweed can show that it is dangerous. Representative of pathogen is one function of importance of seaweed in marine ecosystem.

Important functions of seaweed is producing oxygen. Scientists believe that seaweed has a biger role of producing oxygen than another plant on land. The forest of seaweed can produce oxygen from all parts. Especially, seaweed is not plant, it is a fake plants. So seaweed can do photoshyntetic at all parts of it. Public has known the importance of oxygen in the ocean.

Seaweed provide habitat for marine life. Brown algae or we call it kelp can make a forest in the ocean. Like as forest, seaweed provide all what other marine species need. Food, nutrient, energy, and others is provided by seaweed.

Food is energy for living. Seaweed provide energy as a food for other marine species. Because seaweed is producent at food chain. Energys from seaweed are some nutrients needed in marine ecosystem.

Those are 13  importance of seaweed in marine ecosystem that you know and understand earlier.

13 Importance of Chemistry in Marine Transportation