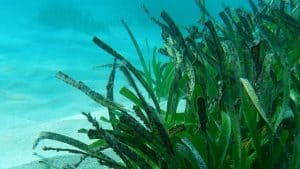 Marine grass or also known as seagrass is a kind of plant which grows in the ocean. You shouldn’t be confused with the difference between marine grass and seaweed because both of them have different characteristics.

The marine grass is said as a vascular plant, it has a root, stem and also leaves. Meanwhile, characteristic of seaweeds is considered as alga which has no organs as marine grass. Read more about types of seaweed in the great barrier reef.

Marine grass commonly lived in clear and shallow waters which have a good circulation. It is because marine grass also needs a sunlight to photosynthesis as the land plants.  The marine grass is lived under the sea as a community so when you see it, you may find that the marine grass looks like a meadow or grassland.

Well, if you wonder why marine grass exists, it’s because it is important. Here are 15 importance of marine grass that you should know:

Read more about endangered animals in the ocean

4. To Stabilize the Movement of Marine Water

Marine grass has long narrow leaves and also the strong root that can reduce the movement of the water which caused by the stream and the wave. The marine grass is also able to trap the sediment and particles that are suspended in the column water. So, the movement of water can be controlled. In short,  the marine grass functions to prevent the erosion and the storm that may occur in the ocean.

The present day, marine grass should be cultivated because it has a lot of benefits for human’s life. People find that marine grass can be fermented and used as the material of fertilizer. It is because marine grass contains the variety of nutrients which are useful for the growth of the plant. So, it can help the farmer to fertilize their plant.

In order to reduce the use of the tree as the material for making a paper, marine grass also can be used as the paper-making material. It is supported by the high fiber substance of marine grass which is very suitable to be utilized as the material of papermaking as well as the tree. Not only that, the marine grass is also able to grow faster than the tree so it can add more points for marine grass.

Marine grass contains a high-calcium 5 times compared to milk. It means, consuming marine grass is really good for healthy bones and growth of bone in which marine grass is able to prevent any bone damage such as osteoporosis.

Marine grass contains mineral, zinc, and protein which is able to smooth the blood metabolism and also to remove the toxin from the blood.

If you want to have a good and healthy diet, you should eat marine grass. The marine grass is known to have iodine which is very useful to burn the fat and handle the carbohydrate substance of the meal that we consume.

Diabetic is a disease that occurs when the blood sugar is getting high. The marine grass contains chromium that helps to establish the metabolism of insulin so it is able to prevent the increase in blood sugar. In this way, the diabetic can be prevented.

The vitamin C of the marine grass is beneficial to trap the cancer cells in our body so that the growth of cancer can be inhibited.

The marine grass can a high iodine source because it lives and absorbs the water in the ocean. As known that iodine is an important nutrient that body needs.

Well, that’s all about the importance of marine grass. I hope you enjoy and also get more knowledge about the ocean. Thanks for reading guys!